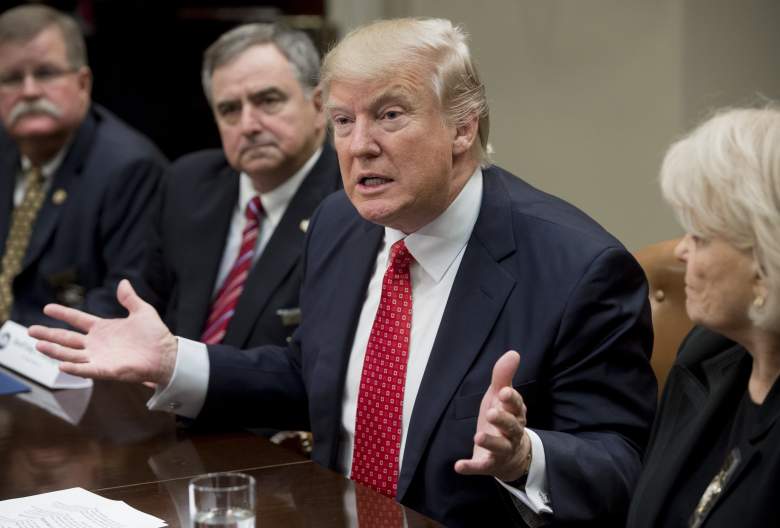 President Donald Trump speaks during a meeting with county sheriffs in the Roosevelt Room of the White House in Washington, DC, February 7th, 2017. (Getty)

Donald Trump has just reacted to the decision of the 9th Circuit Court of Appeals to continue halting enforcement of the president’s recent travel ban.

In a tweet posted about a half-hour after the 9th Circuit’s decision was announced, President Trump wrote in all caps that he will be taking the case to court and that the security of the nation is at stake.

Trump also told NBC News that this was a “political decision,” and he again stated that he will fight it in court. This comes days after President Donald Trump said that the courts have become “so political” in a speech.

“If these judges wanted to, in my opinion, help the court in terms of respect for the court, they’d do what they should be doing,” Trump said. “I mean, it’s so sad. They should be, you know, when you read something so simply and so beautifully written and so perfectly written…and then you have lawyers, and I watched last night in amazement and I heard things that I couldn’t believe, things that really had nothing to do with what I just read.”

On Thursday night, the 9th Circuit Court of Appeals reached a unanimous decision not to reinstate the president’s executive order suspending immigration from seven Muslim-majority countries. The panel, consisting of three judges, upheld the ruling of Judge James Robart, who reached a decision last week to cease enforcement of the travel ban.

The case will now likely be brought to the Supreme Court, with the Justice Department representing the Trump administration.

Earlier this week, Trump again suggested that if the court rules against him, it will be because of politics, tweeting, “If the U.S. does not win this case as it so obviously should, we can never have the security and safety to which we are entitled. Politics!”

He also called out Judge James Robart and suggested that if a terrorist attack is to happen, Robart is the one who should be blamed.

“The judge opens up our country to potential terrorists and others that do not have our best interests at heart,” Trump tweeted on February 4th. “Bad people are very happy!”

In another tweet, Trump referred to Judge Robart as a “so-called judge,” adding that his decision takes law-enforcement away from the country. These attacks on the judiciary branch were not appreciated by Donald Trump’s own nominee for the Supreme Court, Neil Gorsuch, who recently said in a meeting that President Trump’s tweets about federal judges are “demoralizing” and “disheartening.”