Susan Oliver is the widow of a California sheriff’s deputy who was murdered allegedly by a twice deported illegal immigrant whose crime spree sparked one of the largest manhunts in Sacramento’s history.

Oliver is one of the guests whom Donald Trump is bringing to his February 28 address to Congress. She was there with her husband with Deputy Danny Oliver, Jenna Oliver.

Trump has made a point to highlight the families of those killed by undocumented immigrants, inviting another widow, Jessica Davis, and Jamiel Shaw Sr., whose son was slain by an illegal immigrant.

First Lady Melania Trump will sit with Oliver and the other guests, according to The Washington Times. In contrast, several Democrats announced they were bringing undocumented immigrants to the address.

On October 24, 2014, Danny Oliver, a Sacramento County, California sheriff’s deputy was killed when an illegal immigrant, Marcelo Marquez, allegedly went on a crime spree that also killed Detective Michael Davis, according to the Sacramento Bee. He was armed with an AR-15 rifle, the Bee reported. (He later told Fox40 that his real name is Luis Enrique Monroy-Bracamontes; the suspect’s trial is scheduled for March 2017, three years after the crime spree).

Susan Oliver later spoke to the Senate Judiciary Committee in 2015 about what authorities say happened. In that address, she said, “My husband and father of two approached a car on his beat. This time it was the last time. The last thing my husband attempted to do… was to ask the man inside the car how his day was going, but he never made it to the driver’s window. At about 10:30 .am., that man was in the country illegally and armed with numerous illegal weapons. He aimed one outside a car in a parking lot of Motel 6, killing my husband with a shot to his forehead. I can honestly say not a day goes by that this has not affected me.”

She said that Danny Oliver was a 15-year veteran of the Sacramento County Sheriff’s Department who “was not a man to boast or gloat about his professional accomplishments. Danny simply felt he was doing his job… he was policing his community and trying to make a difference. His job was to identify possible community challenges and try to get ahead of them. He put himself into harm’s way every day he put his uniform on.”

2. The Accused Killer, Who Grinned in Court, Was Deported Twice in the Past & Oliver Has Testified Against Sanctuary Cities

It turned out that Marquez – who grinned in court during one hearing where the murders were described in detail – had already been deported from the United States twice, first for a drug crime in 1997 and then again in 2001, The Sacramento Bee reported. He told Fox40 he was part of a cartel.

KCRA reported that the Maricopa County, Arizona Sheriff’s Office, “had Marquez in custody four times” as far back as 1996. He was released to ICE after spending several months behind bars but in 1998 “Marquez was arrested on the possession of narcotic drugs, misconduct involving weapons and possession of marijuana. He was jailed and released,” according to KCRA. It didn’t end there. In 2001, he was arrested again on drug charges; at the time of the crime spree, he and his wife – who was in the car when it occurred – were living in Utah, according to the television station, which added that he worked as a house painter.

“The man that killed my husband was deported several times for various felonies, due to lack of coordination between law enforcement agencies he was allowed back into the country and in one day he committed another crime,” she said to the Senate Judiciary Committee. “That same criminal eluded hundreds of officers during a six-hour crime spree that also left Davis dead, another deputy wounded and a motorist in serious condition with a gunshot to the head.”

According to Roll Call, Susan Oliver was among the families who testified in support of measures to crack down on illegal immigrants who commit crimes, and sanctuary cities that harbor them.

Judiciary Chairman Charles E. Grassley, R-Iowa, had announced legislation “that would withhold federal law enforcement grants for states and local jurisdictions that don’t cooperate with federal officials in holding and transferring criminal immigrants in the country illegally” as well as requiring prison time for those who “repeatedly re-enter the United States after having been deported,” Roll Call reported.

Legislation was named in honor of Oliver and Davis. The Davis-Oliver Act attempted “to increase collaboration between local, state and federal officials in the enforcement of U.S. immigration laws.” It was introduced by then Senator Jeff Sessions, who is now Trump’s Attorney General.

The bill was read twice and referred to the Judiciary Committee. The legislation has not yet passed. As a candidate, Trump urged its passage during a campaign speech, saying, according to a CNN transcript, “The Davis-Oliver bill will enhance cooperation with state and local authorities to ensure that criminal immigrants and terrorists are swiftly really, swiftly identified and removed and they will go fast, believe me, they’re going to go fast.”

3. Oliver Is One of Several Family Members Killed By Undocumented Immigrants at the Speech

In his Address to Congress, #Trump will have as special guests relatives of Americans killed by illegal immigrants ? pic.twitter.com/IzbsefpOC5

Oliver will be joined at the presidential address by the widow of the other officer killed during the crime spree in Sacramento. Also attending: Jamiel Shaw Sr., whose son by the same name was murdered by an illegal immigrant.

Jamiel Shaw, Sr., one of Donald Trump’s first-night convention speakers, is the father of a promising high school teenager who was murdered by an illegal immigrant who wrongly thought he was a rival gang member because of his Spider-Man backpack.

According to the Los Angeles Times, Jamiel Shaw, Jr. (known as Jas) was shot in the head and back in 2008 in California when two men jumped out of a car as he was walking home. “He was asked what gang he belonged to. When he failed to respond quickly enough, they shot him, police said,” according to The Times 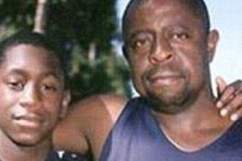 RT @AmarilloPD: The wife of fallen officer Danny Oliver came by to visit #APD from Sacramento. Thanks Susan!! pic.twitter.com/8nN85h6hl6

“I lost the man I was married to for 25 years,” she said in 2015. “Each day I look for parental backup for rearing my child who is 12-years-old, and I feel that way.” According to Fox 40, “Dep. Oliver worked as a ‘problem-oriented policing’ officer, and passed up promotions in order to continue working to improve the troubled neighborhood where he grew up.”

She said her children reach milestones without their father. “My daughter recently got engaged, and there will be a marriage he will not be at. There will be school graduations and even our weekly family brunches that we held. I was with him since I graduated high school 25 years ago, and we watched each other grow up. We made careers together and raised two children. We could just look at each other and know what we needed.”

She said that the couple had mastered “trust and understanding” but “because of the actions of one criminal this all ended. My life will never be the same.”

5. Susan Oliver Has Described How the Pain of Losing Her Husband Is With Her Constantly

Sacramento Kings, have my eternal respect for the tribute they made to fallen officer Danny Oliver. Thank you. pic.twitter.com/7ZBdhdISdv

In her comments to the Senate Judiciary Committee, Susan said the pain never goes away.

“It may not be visible always, it may not be written in bold for all to see, it may not even be recognized but it’s always in the background of my mind. It’s there daily,” she said, adding that she was married to Danny Oliver since high school.