Children wearing masks walk in a street during “Bele Poklade” carnival celebrations in the village of Lozovik, south of the capital Belgrade, on February 22, 2015. “Bele Poklade” has its roots in old pagan customs and is marked annually seven weeks before Easter. Children walk through the village to collect eggs, and at the end jump over a fire to banish evil demons. (ANDREJ ISAKOVIC/AFP/Getty Images)

Today Christians celebrate the resurrection of Jesus Christ after his crucifixion on Good Friday. But many traditions associated with Easter like the Easter bunny and eggs aren’t mentioned in the Bible. Where do they come from?

After Easter became established as a Christian holiday, the traditions and symbols of the pagans remained. Even the name of the holiday Easter is derived Eostre, an Anglo-Saxon goddess associated with spring and fertility.

The Easter bunny can also be traced to Germany. According to History.com, it comes from an ancient Germanic tradition where an egg-laying rabbit called “Osterhase” or “Oschter Haws” would lay colorful eggs in nests made by children. The eggs represented new life and the rabbit was a symbol of fertility.

For Christians, the symbols have been reworked within a biblical framework. Easter eggs are said to represent Jesus’ emergence from the tomb and resurrection. 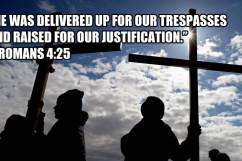 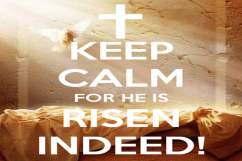 Loading more stories
wpDiscuz
6
0
Would love your thoughts, please comment.x
()
x
| Reply
Today Christians celebrate the resurrection of Jesus Christ after his crucifixion on Good Friday. But many traditions associated with Easter like the Easter bunny and eggs aren't mentioned in the Bible. Where do they come from?