In April, Kane Brown announced during a performance that he’d gotten engaged to his girlfriend Katelyn Jae.

At tonight’s CMA Awards, Jae will cheer on her man as he duets with Brad Paisely. The two will be singing “Heaven South”. Discussing his performance with the country music icon recently, Brown told Taste of Country, “It’s one of the greatest feelings in the world… I’m pumped, it’s going to be awesome.”

Based on their social media accounts, Jae and Brown have shown to signs of slowing down. They’re very clearly smitten with one another.

Here’s what we know about Katelyn Jae.

1. Kane and Katelyn Got Engaged in April

Katelyn and Kane got engaged on Easter Sunday, April 16.

According to Taste of Country, Brown posted the happy news to his Instagram, but ended up deleting it because of fans’ negative comments.

“It’s hard to do this job — you know, there’s girls involved — you’ve got to stay out of trouble, it’s really hard,” Brown said mid-way through the concert. “Some people found out on Instagram today and I had to delete this video… I just got engaged to a girl from Philadelphia two days ago. This is my first time making this announcement, but we’re in Philly, so I thought I had to go ahead and make the announcement. So thank you Philadelphia.”

@kanebrown announcing his engagement. I'm so happy for him. Congrats!! ?? pic.twitter.com/zgu3OLoxxP

Kane is clearly very much in love with with Jae. In January, he took to Facebook with a post that read, “I know a lot has been going good for me this past year, but being away from my family and friends it’s been tough… Luckily I found my other half. I know a lot of people might get mad I’m in a relationship but if your a true fan u won’t. She keeps me Sane, she keeps me happy she’s my girl. God Bless.”

2. She Is Winner of the First Season of YOBI.Tv and MySpace’s “Take the Stage” Contest

Jae, a fellow singer, won the first season of YOBI.tv and MySpace’s “Take the Stage” contest. According to her website, she’s also the newest protégé of world-renowned music manager Johnny Wright of Pop Nation Entertainment.

After winning “Take the Stage”, Jae is reported as saying, “I am so thankful and blessed to have had this opportunity, it has changed my life. I could not be happier, I am so excited and determined to work hard and continue this dream.”

Growing up, Katelyn trained with vocal coach Kelly Woolfrey. She’s recorded, and is waiting to release, her debut EP titled “Finally”, which was co-executive produced with Johnny Wright. According to her website, Katelyn has recently worked with with celebrity vocal coach to the stars Raab Stevenson, Mark Goff, and the Artist Development Team at Pop Nation’s Florida Compound.

Horseback riding with my man ?

Katelyn was born and raised in Philadelphia in the suburb of West Chester.

She began singing at age 3. Her bio reads, “With a new toy microphone in hand, her idea of a fun play-date as a youngster was spending hours making up dances and musicals to perform for her parents. When Katelyn entered sixth grade, an insightful choir teacher noticed her talent during a fall school concert performance of Celine Dion’s ‘My Heart Will Go On,’ and suggested that her parents put Katelyn into vocal and piano lessons. It was then at age 11 her mother realized Katelyn had a gift.”

She may be dating one of the biggest names in country music, but Jae is doing well for herself as a musician. Her Facebook artist’s page currently has over 23,000 likes.

Jae graduated from West Chester University, where she focused on singing and creating music.

In 2008, she placed in the top five in the 2008 International Model and Talent Association conference, and represented the US in the 2010/2011 Avon Voices International Talent Search.

5. They Dated for Under a Year Before Getting Engaged

you make me smile ?

In April, Entertainment Weekly‘s Kevin Frazier spoke to Brown about his relationship.

The singer dished, “She’s a sweet girl. She’s from Philadelphia, and we’ve been dating almost… it’s going to be eight months coming up. You know, being on the road, we did 200 shows in 2016. You get lonely… Whenever she’s out with me, I just have a good time. And she makes me happy. I’m never depressed when she’s around me.”

They pair has yet to publicly announce a wedding date. 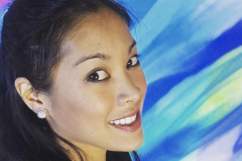