Getty A little girl waiting at a window for the first guests to arrive at her Halloween party, USA, circa 1955.

According to City Lab, in Portsmouth, Virginia, trick-or-treating over the age of 12, unless they are supervising a younger child, and/or trick-or-treating after 8 p.m. local time is punishable as a misdemeanor, with a fine of up to $500. City Lab has also reported some other restrictions in certain areas, writing that, “In Walnut, California, trick-or-treaters can’t wear a mask or disguise; in the state of Alabama, they’re not allowed to dress up as a member of the clergy. And don’t even think about using silly string with your costume in Hollywood, California, unless you’re prepared to cough up a $1,000 fine.” Some communities are so strict that teens are not permitted out on Halloween night, past the trick-or-treating curfew, unless they are coming from or going to a place of employment.

Avvo Stories has reported that, in some areas, if Halloween day falls on a Sunday, it is illegal to trick or treat that day. Trick or treaters must wait until Monday. This year, the holiday falls on a Wednesday, so that will not apply for 2018.

In some states, sex offenders must post signs on their lawns that read “No candy at this residence”, as reported by Find Law. Some of these laws have titles like “Halloween: Zero Tolerance.” Find Law states that, “A California law, known as “Operation Boo”, allows officials to conduct nighttime checks on the evening of Halloween to make sure some registered sex offenders are insider their homes with the lights out. Similarly, a New York law known as “Halloween: Zero Tolerance” allows state investigators to make unannounced home visits, curfew checks, and phone calls to enforce the laws.” Violation of one of the above laws can result in a felony charge with up to three years in prison. So, there are many law and guidelines that are in place to help protect those who participate in Halloween festivities. 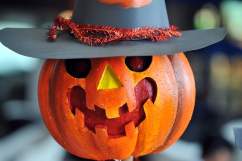 Read More
Halloween
What are the laws and age limits for trick or treating on Halloween in 2018. Get the rundown on the ages, curfews and also restrictions for sex offenders.