Police Photo Matthew Bernard pictured in his mugshot and running naked in Virginia.

The 19-year-old Bernard was taken into custody by police while running naked through Keeling, Virginia, hours after the murders. He has since been booked into a local jail, authorities said. Keeling is an unincorporated area of Pittsylvania County in south-central Virginia near the North Carolina border that is home to about 1,200 residents.

The killings occurred on the morning of August 27. Authorities have not released many details about what led to the murders and how the victims were killed.

Here’s what you need to know about Matthew Bernard and the triple homicide:

Police, including the Pittsylvania County Sheriff’s Office and Virginia State Police, swarmed Matthew Bernard’s family’s house on Keeling Drive about 8 a.m. after receiving a 911 call that someone had been shot, according to WSLS-TV. Officers arrived about 12 minutes after he 911 call and found a woman dead in the driveway. Another woman and a child were found dead inside the home, police said.

According to WSLS-TV, the family’s dog was also shot and killed. Matthew Bernard’s father, Nelson Bernard, was not killed, but the suspect’s uncle told the news station that Nelson Bernard was home at the time of the murders.

Emily Bivens and her son at one of Blake Bivens’ baseball games.

Police issued an alert to local media and a reverse 911 call to area residents saying that the 19-year-old suspect, Matthew Bernard, was on the run and wanted. Authorities said he ran into a wooded area before officers arrived at the scene. Several schools were put on lockdown as a precaution as Bernard had been seen leaving the scene still armed with a rifle, authorities said in a Facebook post.

About 100 officers responded to the scene and to help in the search for Bernard, the sheriff’s office said. 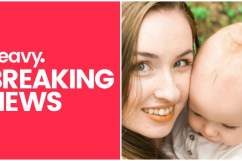 2. A Video Shows Matthew Bernard Being Chased by Police While Naked, Running Into a Church Parking Lot & Choking the Caretaker of the Church

EXCLUSIVE VIDEO: The suspect in a triple homicide in Pittsylvania County, 19-year-old Matthew Bernard, ran toward @KyleMWilcoxTV & @humphreyWSET while they were at a staging area — he also strangled the church's caretaker.https://t.co/4OVjvg9kkQ pic.twitter.com/cg23z2KIEX

Matthew Bernard was arrested about 12:15 p.m., according to police. Before he was arrested, he was seen in videos running around Keeling while naked, with police officers chasing him. He also attacked the groundskeeper at Keeling Baptist Church. Video and photos show him choking the man.

Authorities have confirmed Matthew Bernard is the suspect in custody for a triple homicide in Pittsylvania County. He was apprehended after an hours long search, a foot chase, and a scuffle in which he allegedly attempted to choke a church groundskeeper. Photos courtesy Matt Bell pic.twitter.com/FW5E8y1SW1

According to WSLS-TV, Bernard was arrested at the Paradise Campground, which is owned by his family. The news station reports that Bernard could be seen in the back of a police vehicle banging his head against the glass after he was taken into custody.

In a statement about the video of Bernard’s arrest, the Virginia State Police said, “During the course of the manhunt, the murder suspect came running out of the woods in an aggressive manner towards the media staging area. A trooper staged with the media initially confronted the naked individual and then pursued the man on foot.”

The state police statement continued, “The murder suspect was not in possession of a weapon and was in obvious mental distress. State police are trained to first attempt to deescalate a situation with an individual who is displaying obvious mental distress. The trooper used the equipment at his disposal, which included pepper spray and a baton. Only state police tactical teams (the equivalent of a SWAT team) are equipped with Tasers. Troopers are also trained to maintain a safe, tactical distance from a suspect in order to prevent an individual from gaining access to the troopers’ weapons.”

3. Bernard Graduated From Dan River High School in 2019 & He Was Attending a Local Community College, Which Was Locked Down While He Was on the Loose

Matthew Bernard graduated from Dan River High School in 2019. He had been attending a local community college, according to Facebook posts.

Police said Danville Community College, where Bernard had been attending, was put on lockdown as a precaution while Bernard was on the run. It is not known if there were any specific threats made toward the school.

Few other details about Bernard have been released.

4. He Has Been Charged With 3 Counts of Murder, but the Investigation Is Still Ongoing & a Possible Motive Has Not Been Made Public

Police PhotoMatthew Bernard in a photo released by police.

Bernard was charged with three counts of murder, according to the Pittsylvania Sheriff’s Office. He was booked at a local jail and he is scheduled to make his first court appearance on Friday. It is also not known if he has an attorney who could speak on his behalf. He is also facing gun charges.

The investigation is still open and ongoing, and police have not said if they know of a motive in the killings.

“We won’t go into the whys because we don’t know yet,” Pittsylvania County Sheriff Mike Taylor told reporters after Bernard was arrested. “We are trying to figure that out ourselves.”

Bernard was taken to a local medical facility for treatment prior to being booked into jail, but authorities have not said what injuries he suffered. A mugshot released by the Pittsylvania County Sheriff’s Office shows Bernard in an orange jumpsuit with a white bandage around his head.

5. The Montgomery Biscuits Postponed Their Game After Blake Bivens Learned His Wife of 3 Years & His 1-Year-Old Son Had Been Murdered

The suspect’s brother-in-law is pro baseball player Blake Bivens, a 24-year-old Virginia native who has been pitching in the Tampa Bay Rays organization since he was drafted in 2014. Bivens is currently a member of the Montgomery Biscuits in Double A. The team postponed its game on Tuesday, August 27, after learning of the deaths of Bivens’ family members.

“Earlier today, we learned that one of our players, Blake Bivens, suffered unimaginable loss. FIrst and foremost, the Biscuits thoughts and prayers are with Blake and all those who have been impacted by this tragedy,” the team’s owner and CEO Lou DiBella said in a statement. “We appreciate the outpouring of support and concern but ask that yu respect the privacy of the family during this difficult time.”

Blake Bivens and Emily Bernard Bivens were high school sweethearts and were engaged in 2015. They were married on January 9, 2016. Their son, Cullen Micah Bivens, was born in June 2018.

Emily Bivens was part of the Our Baseball Life community of baseball players’ wives and girlfriends, and created art that was sold on the group’s website. She also wrote for the Baseball Chapel. In a post on July 31, she wrote about dealing with life’s storms:

Sometimes your best days come after your worst. In one particularly discouraging time, I was waiting to hear the results of a game. When I got the call, there had just been a rainstorm outside, but the clouds were clearing and the world seemed even more vibrant than before. The grass looked greener, the sun seemed to shine brighter, and everything had that beauty that comes after a storm. I remember noticing this for a brief moment right before the phone rang. It was Blake, telling me that the game had gone amazingly. He had dominated on the mound.

Only the day before, he had been frustrated and confused, and now he was victorious and hopeful.

It makes me think of all of the storms we couldn’t see the other side of at the time: When Blake was injured in high school at what seemed like the worst time, but when drafting day came, he was healthy and ready for his career in professional baseball to begin. When we thought that we were going to have to move our wedding because of a few remaining college courses, but we were wed in January and I was given a job that provided enough for us and allowed me to spend Spring Training with him.

There are so many circumstances in our lives and the lives of people we have the privilege of knowing that looked bad at first, but were turned around for good. I’m sure you can think of many in your own life as well. God is a Master at making things beautiful (Ecclesiastes 3).

Whatever you are going through, put your hand in the hand of the God Who can see over your mountains and past your storms because sometimes, on the other side of the storm, the beauty in His plan is even more evident than before.

Our Baseball Life has created a GoFundMe to help the Bivens’ family. The group wrote, “We are devastated by the loss of our friend and fellow baseball wife, Emily had an incredible heart for the Lord and shared His light to many through her writings in Baseball Chapel. She deeply loved this community of baseball women and was a comforting, kind soul to all who knew her. Our hearts are with her husband Blake and her family during this unimaginable time.”

Happy 1st Birthday to my little man! Daddy loves you!

In June, on his birthday, Blake Bivens posted photos and videos of his son and wrote, “Happy 1st Birthday to my little man! Daddy loves you!”

His Instagram page is filled with loving messages and photos of his family. He wrote in January 2018, “Happy 2nd Anniversary to the life partner anyone can ask for! Love you.”

He posted a photo on Facebook of his wife and son in January 2019 and wrote, “A lot has changed over the past 3 years of our marriage. We’ve both became better people and spouses, also we have learned to work and put each other’s feelings first. I can go on for days about how much you have changed me for the better. However there’s one thing you can’t change and that’s how much I love you and how wonderful you are to me! I love you with all my heart ! Happy Anniversary baby your the greatest wife and baby momma anyone can ask for! I love you Emily Bivens.”

Loading more stories
wpDiscuz
0
0
Would love your thoughts, please comment.x
()
x
| Reply
Matthew Bernard is a Virginia man accused of killing his mother, sister and nephew. The victims include the wife and son of Tampa Bay Rays prospect Blake Bivins.