While much of the world is taking part in Christmas Day festivities, the NBA will be holding business as usual with a set of intriguing matchups throughout the day.

To kick things off, the Washington Wizards head to Madison Square Garden to take on the struggling New York Knicks, who head into the Christmas Day game on a five-game losing streak. Following the game in New York is a rematch of last season’s Western Conference finals when the Oklahoma City Thunder will try to get a much needed win against last year’s NBA champion, the San Antonio Spurs.

Next up is Lebron James’ return to Miami, where he’ll play for the first time after spending the last four years playing alongside Dwyane Wade and company in South Beach.

For the primetime game, the defensively inept Los Angeles Lakers head to Chicago to take on Joakim Noah and the Chicago Bulls. This is all topped off with MVP candidate Steph Curry and fellow Golden State Warriors splash brother Klay Thompson heading to Los Angeles to play the Clippers at home.

Here’s how to watch on tv, online and mobile device:

The Wizards vs. Knicks game will air nationally at noon ET on ESPN. The next two games — Oklahoma City-San Antonio and Cleveland-Miami — will air on ABC at 2:30 p.m. and 5:00 p.m. ET.

The day’s basketball festivities end on TNT with Lakers-Bulls at 8:00 p.m. ET and Warriors-Clippers at 10:30 p.m. ET.

Wizards-Knicks is available on WatchESPN.com although you’ll need to login through your cable provider to access the stream.

The two games on ABC — Oklahoma City-San Antonio and Cleveland-Miami — are both available on abc.go.com/watch-live for those with a cable subscription and login, however this is not available in all markets so you’ll have to check your local listings.

Games on TNT are available on TNTdrama.com but as with the others, requires a cable subscription and login.

Mobile and tablet users can watch Washington-New York through the Watch ESPN app, while the OKC-San Antonio and Cleveland-Miami games will be available on the Watch ABC app. Lakers-Bulls and Warriors-Clippers, meanwhile, can be streamed through the Watch TNT app.

All three apps are free to download but require login for a cable subscription.

You can find all three in the App Store, the Google Play store, the Amazon App store, and the Windows Store. 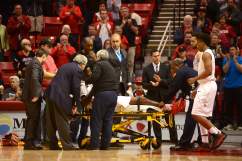