Seattle’s first touchdown of the game came on a fake field goal. Punter Jon Ryan made the pass to Garry Gilliam from 19 yards out for the score on 4th & 10.

Ryan now has more touchdown passes in the game than Russell Wilson, and Gillman, a rookie lineman out of Penn State, has scored more points than Marshawn Lynch. The Seahawks will need more plays like this if they hope to make it to the Super Bowl. 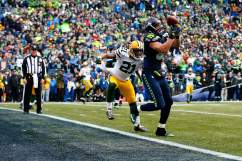