Reading goalie Adam Federici cannot hold Alexis Sanchez’s shot and he scored his second goal of this FA Cup semi-final matchup between Arsenal and Reading on April 18, 2015. Arsenal won 2-1 and moved on the FA Cup final on May 30, 2015. This was Alexis Sanchez’s 22nd of the season in all competitions. 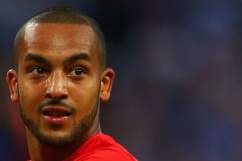 Read More
Soccer
Alexis Sanchez scored his second goal for Arsenal against Reading in the FA Cup Semifinals at Wembley Stadium on April 18, 2015. This was his third goal of the tournament.