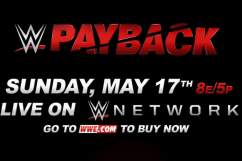 Man, didn’t we just have a WWE special event/PPV? Seems like it was just a week ago, right? Anyways, we have no arrived at WWE’s May 2015 edition of Payback.

Seth Rollins retained his WWE Championship over Randy Orton at Extreme Rules, but it was totally under nefarious means. Rollins is going to have much more competition to deal with this time along with the threat of Orton. The Shield will be reuniting, but not in the way fans would have expected. Plus, John Cena and Rusev will come to blows once again in an “I Quit” match for the U.S. Championship.

Here’s our preview for all the announced matches at WWE Payback 2015.

Curtis Axel and Damien Sandow vs. The Ascension (Konnor and Viktor)

Predictions & Winners: The Mega Powers are back…in the form of Curtis “Axelmania” Axel and Macho Mandow. We had much higher hopes for both those Superstars doing something other than mimicking past wrestling legends. But alas, we’re just happy to see them featured prominently on WWE TV. Both men will be going against a team that looks straight out of the Golden Era – Konnor and Viktor, The Ascension. This bout harkens back to the type of bouts we used to watch on Saturday’s Night Main Event. And just like Hogan and Savage used to do, they’ll power up and prevail over their Demolition look-a-likes. Axel and Mandow are heading straight towards those tag team titles soon (maybe at Elimination Chamber 2015?).

Predictions & Winner: Again? Yep, again! But we love both guys and they’re always putting on awesome matches together. After Sheamus forced Ziggler to plant a kiss on his bum, Ziggler made it his mission to get revenge. We have a feeling that Ziggler won’t be able to fully carry it out in this match, though. Evil Mohawk Sheamus FTW here! We get the feeling that they’ll both end up in each other’s faces once again during that planned Elimination Chamber match for the IC Championship.

Predictions & Winners: Color us surprised at how more entertaining The New Day have turned out to be since winning the tag team titles from Kidd and Cesaro. Over the past few weeks, they’ve become the annoying and easy to hate trio of the WWE. Kidd and Cesaro were moving along pretty strong during their championship reign, which is why we were so shocked to see them lose the titles at Extreme Rules. We envision this 2-out-of-3 Falls Tag Team Match going like this – Kidd and Cesaro will capture the 1st win, The New Day will grab the 2nd pinfall and finally…Kidd and Cesaro will capture the WWE Tag Team Championship on the 3rd pinfall! Yep, we think a hotshot title switch is gonna go down. This feud will continue in the Elimination Chamber. Trust us on that prediction.

Naomi and Tamina vs. The Bella Twins (Brie Bella and Nikki Bella)

Predictions & Winner: We’re confused. So all of a sudden we’re supposed to cheer the Bella Twins just because their opponents went all heel mode on them? See, stuff like this is why we stick to good women’s wrestling feuds on NXT. While we actually care about Naomi, we certainly don’t give two you-know-what’s about the other ladies involved in this tag team bout. Since the bad gals have gotten the upper hand so much lately, we think they’ll get their comeuppance by the Bellas on PPV this time. Expect this storyline to continue (sadly…).