Tiger Woods and Jason Dufner walk together at the President’s Cup in 2013. (Nick Price/ Getty)

Once a rising star who captured five top-10 major finishes, including the 2013 PGA Championship, in a span four seasons, Jason Dufner has had a rough couple of years. He’s been back inside the top-50 at a major just twice in the last eight tournaments, and in early 2015 he divorced Amanda (nee Boyd), his wife of three years, amid some nasty and completely unfounded rumors.

Those rumors included Tiger Woods, who has had his share off the off-the-course scandals.

Here’s what you need to know about the pair’s unwanted connection:

1. Tiger Was Accused of Having an Affair With Amanda

Tiger Woods tosses his club after hitting a tree root on a shot Sunday. (Getty)

As if a highly publicized divorce wasn’t difficult enough on Jason and Amanda, the National Enquirer came through with rumors that it was a result of Woods having a relationship with Dufner’s wife. The tabloid cited an anonymous source, saying:

Even though Tiger dated Lindsey [Vonn] for years, he had a “thing” for Amanda.

Amanda is gorgeous, and she’s known as a big flirt with the other players on the PGA tour. I guess her flirty ways and good looks caught Tiger’s eye.

2. It’s Not Clear Why the Dufners Divorced

This past February, friends and fans were shocked when the Golf Channel reported that Amanda had filed for divorce from Jason.

The details of why the couple split out of nowhere haven’t been specified, but the divorce settlement on March 16 read:

The Dufners got hitched in May of 2012 and were separated in February 2015, less than three years later. They didn’t have any children.

Amanda was introduced to Jason by a friend while she was attending the University of Alabama and he was already on the PGA Tour. She is originally from Millbrook, Alabama, while he is from Fort Lauderdale, Florida.

EastAlabamaLiving.com has some details on their courtship:

3. Dufner & Woods Have Joked About the Scandal 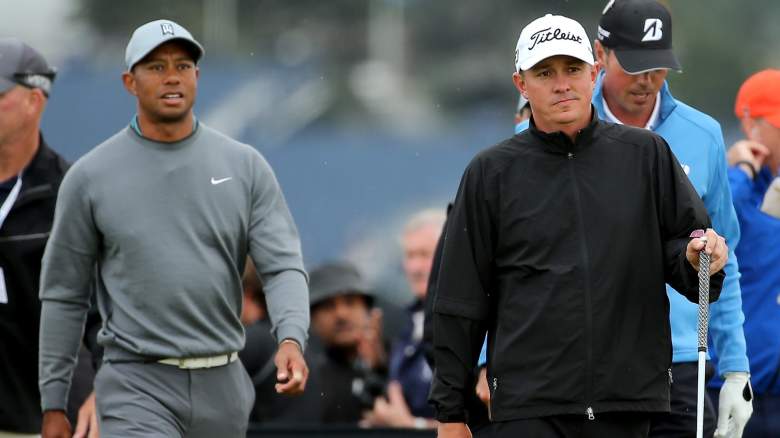 In July 2015, about a month after rumors were running rampant, Woods and Dufner played a practice round together at the Open Championship.

While both were undoubtedly upset about the unsubstantiated rumors being spread, they also reportedly had no problem joking about the scandal, according to a report from the New York Post‘s Mark Cannizzaro.

Woods and Olympic gold medalist skier Lindsey Vonn ended their relationship in May 2015, and even though they publicly declared it was for mutual reasons, the rumor mill still started up.

This time, it was the Daily Mail with the unfounded claim.

“He had a relapse in the sex department,” said an anonymous source. “Lindsey found out about women again. Always while he’s on the road. Just like when he was with Elin (Nordegren, Tiger’s ex-wife).”

The one-time slip allegedly occurred in February in San Diego after Woods withdrew from the Farmers Insurance Open because of back pain. Woods eventually came clean about the one-night stand to Vonn after he realized he was spotted with the woman, according to the Daily Mail, but that was it for the relationship.

5. Jason & Amanda Became One of Golf’s Most Popular Couples in 2013

After winning the 2013 PGA Championship, Dufner celebrated with his then-wife, which is commonplace whenever anyone wins a major. He made headlines, though, when he gave Amanda a little pat on the backside on national television.

The couple quickly became one of the more popular ones on Tour after that moment.