DeMarco Murray scored his first two touchdowns as a Philadelphia Eagle, bringing his squad back against the Falcons on Monday night in the process. Here are both:

The first came on an eight-yard scramble early in the third quarter:

And the second came later in the quarter on a five-yard pass from Sam Bradford: 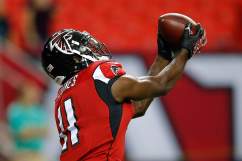