Edmonton Eskimos Quarterback Mike Reilly is on the verge of the 6,000-yard passing mark. (Getty)

Canadian football fans who want to watch the Week 18 showdown pitting the Edmonton Eskimos against the B.C. Lions on Saturday can find full information on how to watch the crucial game – one that could determine playoff position for both teams just three weeks ahead of the CFL postseason.

Depth Chart day! See how the #Esks will line up on Saturday against the BC Lions.

Kickoff is scheduled for 4 p.m. Pacific Daylight Time at the Lions’ home of B.C. Place Stadium in Vancouver, British Columbia — 7 p.m. Eastern. The Eskimos come into the contest at 8-7, just one game behind the 9-6 Lions in the CFL West Division standings. A win for Edmonton would give them the tiebreaker over B.C., after the Eskimos won the first meeting between the two teams, 27-23 back on September 23.

How to Watch the Eskimos-Lions Game Online in Canada

Canadians who want to watch a live stream of the Eskimos vs. Lions game will need login credentials from a TV provider that carries TSN, the all-sports network with the broadcast rights to all 81 CFL games in 2016. Fans can use those login credentials to access the TSN GO streaming service when they click on this link. To live stream the game on mobile devices, download the TSN Go app for almost any smartphone or tablet, then use the same user name and password to log in to the service via the app.

How to Watch the Canadian Football Matchup in the United States

The Edmonton game in British Columbia will be carried in the U.S. as a live stream only, thanks to ESPN3, the online entry in the ESPN network of sports channels. ESPN3 does not require login credentials to a TV service provider, but users do need to be able to log in to an internet service provider. A list of most ISPs that include access to ESPN3 can be found at this link.

One you’re sure that your ISP allows access to ESPN3 — and almost all do — the channel is free, and can be reached at this link to watch Saturday’s CFL game.

To watch on mobile devices, download the WatchESPN app, which includes access to ESPN3. The free online sports network is also available via the WatchESPN channel on set-top streaming boxes such as the Roku, Apply TV and Amazon Fire TV, allowing fans to live stream the CFL game to their full-size television screens.

? "They have a lot of weapons. It all starts with Mike."@Bighill44 on facing @Rikester13 and the Eskimos in another huge clash! ? ? pic.twitter.com/hnyhEzzmMr

Though they sit in fourth place in the West and will likely need to win all three of their remaining games to reach second place and a playoff berth, the Edmonton Eskimos are the defending CFL champions, winning the 103rd Grey Cup — the traditional championship of Canadian football. The Eskimos defeated the Ottawa Redblacks — a team that got to the Grey Cup game in only its second season of existence — 26-20 as quarterback Mike Reilly tossed for two touchdowns and 269 yards.

To relive the Eskimos Grey Cup victory — the team’s 14th since its founding in 1949 — watch a full replay of the game played November 29 of last year at Investors Group Field in Winnipeg, in the video below.

The Eskimos 31-year-old signal caller Mike Reilly has a chance to enter his name in the CFL history books this season, standing only 946 passing yards shy of the 6,000-yard mark — a milestone reached only five previous times by four different quarterbacks in the CFL’s history of more than a century.

Doug Flutie passed for 6,000 yards in two different seasons, while Kent Austin, and David Archer each accomplished the feat once, as did Anthony Calvillo in 2004 — the last time anyone reached the 6,000-yard plateau. But Reilly will need to average 316 yards in each of his remaining three games, starting on Saturday, to join that group.

Reilly, who went undrafted in 2009 out of Division II school Central Washington, spent parts of the 2009 and 2010 seasons on the practice squads of four different NFL teams. But in 2010 he left the NFL and signed with the CFL’s B.C. Lions, where he won a Grey Cup with that team in 2011.

Reilly won his second title last year in his third season with Edmonton, when he was also named the Grey Cup MVP. 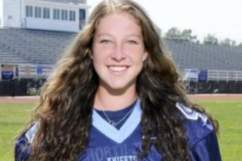