For the second consecutive night FanDuel players will have eight games from which to construct their rosters, and one of the best available players is Boston Celtics guard Isaiah Thomas ($9,200). Well on his way to another All-Star Game appearance, Thomas has been outstanding for the Celtics this season with averages of 27.2 points and 6.4 assists per game. And since missing four games due to a groin injury, he's been rolling offensively despite being the focus of opposing defenses.

A 45.3 percent shooter from the field on the season, Thomas has shot 50 percent or better from the field in six of his last ten games. Included in that stretch are his last three games, with Thomas shooting no worse than 55.6 percent from the field in any of those contests (which includes his 52-point game against the Heat). Thomas has also shot 16-for-26 from three and dished out an average of 8.0 assists per game over his last three outings. Percentages obviously aren't a FanDuel scoring category, but they show just how good Thomas has been recently. And with Philadelphia being the opposition tonight (37 points, seven rebounds in their first meeting), Thomas could be in line for another highlight-worthy performance.

Here are our FanDuel picks for Friday, working with a $60,000 salary cap to fill a nine-player roster. (Getty) 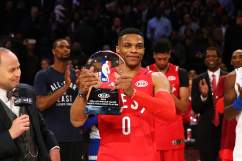