Police have released the dashboard camera footage from Tiger Woods‘ Monday DUI arrest. Woods was arrested on suspicion of driving under the influence by Jupiter, Florida police, who say they found him sleeping by the side of the road at 3 a.m. Monday morning. Jupiter Police also released photos of the Woods’ car, which had two flat tires and “fresh” damage to both the front and back bumpers, police said.

In the footage, Woods does tell the officer that he thinks he was coming from Los Angeles and did not know where he was, as the police report notes. He also tells the officer that he has taken prescription medication. The former top-ranked golfer in the world is shown having difficulty walking along a straight line. The police report noted that Woods failed all the sobriety tests. The report states that when the 41-year-old was asked to recite the alphabet, he asked if they wanted him to sing the National Anthem backwards.

Jupiter police released 98 minutes, beginning from the moment the officer stops behind Woods to the point where he is in the back of the cruiser and taken to the police station.

In a statement, Woods said he was not driving while drunk, and instead blamed his behavior on the drugs he has been taking since his latest back surgery last month. “What happened was an unexpected reaction to prescribed medications. I didn’t realize the mix of medications affected me so strongly,” Woods said, adding an apology to his friends, family and fans.

According to the police report, Woods had to be woken up by the police officers who found him. The arresting officer wrote that Woods was the only person in his 2015 black Mercedes. “Woods had extremely slow and slurred speech,” the officer wrote.

The officer wrote that Woods was not aware of where he was and thought he was coming from Los Angeles. “Woods asked how far from his house he was. It should be noted that Woods was heading south bound, away from Hobe Sound,” the officer wrote. Woods also told police that he takes several prescription medication. It also lists “Odors: None.”

Then, the officer also wrote that Woods was “cooperative as much as possible,” but was “extremely sleepy” and had trouble keeping his eyes open.

The report also claims that when Woods was asked if he could recite the alphabet, he said he understood the directions, but offered to recite the “national anthem backwards” instead. “After several times of explaining instructions he completed the task correctly.” It supports Woods’ claim that he was not under the influence of alcohol. It states that he did take a breathalyzer and blew .000. The report states that Woods failed the other sobriety tests. He couldn’t stand on one leg or even touch his nose.

In a statement on Monday night, Woods blamed the incident on his prescription drugs and apologized for letting his friends, family and fans down. He said he “fully cooperated” with police, which officers also noted in the police report.

“What happened was an unexpected reaction to prescribed medications. I didn’t realize the mix of medications affected me so strongly,” Woods said. “I would like to apologize with all my heart to my family, friends, and the fans. I expect more from myself, too. I will do everything in my power to ensure this never happens again.’

Woods is due in court for his arraignment on July 5. You can read the entire police report below. 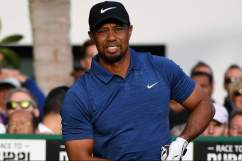