Mehmet Kanter, the father of NBA player Enes Kanter, has been detained by FETO, otherwise known as the Followers of the Muslim cleric Fethullah Gulen in Turkey. According to NRCA, Mehmet is being detained by security forces in Istanbul’s Kadikoy district, and will be taken to the Tekirdag province after he is processed by the police.

Enes, who is a forward for the Oklahoma City Thunder, tweeted out the news early Friday morning, saying: “HEY WORLD, MY DAD HAS BEEN ARRESTED by Turkish government. He is potentially to get tortured as thousand others.” To learn more about Enes Kanter, his father Mehmet, and their political affiliations in Turkey, here are five fast facts you need to know.

Enes Kanter has long had issues with the Turkish government, and the latest of these issues dates back to last month when he was detained at a Romanian airport. It was later revealed that the Turkish embassy had cancelled his passport, and Kanter, who posted a video of the ordeal on social media, believed that he was being detained due to his political beliefs and his critical opinions of the Turkish President, Recep Tayyip Erdogan.

“It was of course very scary,” he later said, “It was scary because there was a chance they might send me back to Turkey. If they sent me back to Turkey, probably you guys would hear a word from me the second day. It would have definitely gotten really ugly.”

2. Mehmet Has Publicly Disowned His Son

According to the Daily Sabah, Kanter was disowned by his family in 2016 for his support of the Gulen Movement in Turkey. Mehmet claimed that his son was “hypnotized” by the rebellious group, and even went as far as to offer his condolences to President Erdogan: “I apologize to the Turkish people and the president for having such a son.”

Daily Sabah also reported that Mehmet was disturbed by his son’s behavior and critical tweets about Erdogan, saying “His statements and behavior trouble our family. I told Enes that we would disown him should be not change his course. He did not care… I would not have taken Enes to the U.S. for the basketball camp where his talent was discovered had I known that it would come to this point.”

Enes Kanter was the third overall pick by the Utah Jazz the 2011 NBA draft, where he went on to set the record for most rebounds in a single game by a rookie in franchise history. In 2015, he was traded to the Oklahoma City Thunder.

3. Mehmet Was Subject to Persecution In Turkey

Due to Kanter’s outspoken opinion on Erdogan, his family, who still reside in Turkey, have been subject to persecution. “My brother told me that my dad goes to the supermarket and they spit on his face,” Kanter revealed, adding that his family “can’t even go out to eat” in public anymore.

Kanter’s cousin Bilal, in the aforementioned interview with the Daily Sabah, said that “We had warned him previously about his ties with the FETO. We have not been able to reach out to Enes for a long time.” Enes confirmed this in a May 22nd interview, admitting that he hasn’t been able to communicate, and that he fears they could be put in jail. Bilal also hinted at the idea that the Gulen are interested in keeping Enes due to his fame and monetary wealth.

4. Enes Continues to Support the Gulen

Despite being disowned by Mehmet, Enes has continued to follow the political group he sees as just. The announcement was made public in 2016 when GiveMeSport.com released a statement online:

Oklahoma City Thunder forward Enes Kanter has been disowned by his parents due to his support of Pennsylvania-based cleric Fethullah Gulen — believed to be involved in the coup — who is currently in a feud with Turkey’s president Tayyip Erdogan.
Kanter’s father, Mehmet, who supports the Turkish government and Erdogan, issued a handwritten letter to the Turkish media distancing himself — and the rest of the family — from the NBA star.
“With a feeling of shame I apologize to our president and the Turkish people for having such a son,” the letter said.

Kanter took the heartbreaking news in stride, and released a statement of his own that read:

“Today I lost those who for 24 years I called … my family … My own father wanted me to change my surname. The mother who gave birth to me rejected me,” Kanter said.
“May God take every second of my life and give it to my brave Teacher… From now on my mother, father and siblings are (the)… devoted members of Hizmet.”

5. There Is Currently A Warrant Out for Enes’ Arrest As Well

Though he currently resides in the United States, Kanter has yet to make it out of the woods in terms of his own persecution. The NBA player told KRCA that he receives death threats on a regular basis. Last week, The Washington Post reported that Enes has become the subject of an arrest warrant himself in Turkey, to which he responded with an essay in the publication The Players’ Tribune.

Enes wrote: “You guys need to know what is going on in Turkey right now. I hope people around the world will open their eyes to the human rights abuses. Things have gotten very bad over the last year. This is not my opinion. We don’t know everything that is happening inside Turkey, but we do know some facts. Newspapers and media have been restricted. Academics have been fired… There are reports of torture and rape and worse.”

As of now, there is no further word on when Mehmet will be released or what he will be charged with. As for Enes, he is currently in the process continuing the fight against Turkey and officially becoming a U.S. citizen. “Right now I’m country-less,” he said, “I’m open for adoption.” 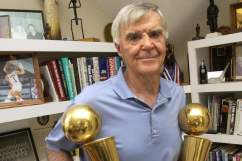 Jack McCloskey Cause of Death: How Did the Former Pistons GM Die?