My son Kody wanted to shave his head, just like Daddy. So he settled for a crew cut. Love this boy so much. #justlikedaddy #myonlyson #daddysboy

Of course, that’s not really the case; it’s just a WWE storyline, and Angle and Jordan aren’t related at all. Kurt Angle actually does have a son though: Kody Angle.

As all this Jason Jordan drama unfolds on Monday Night Raw, here’s what you need to know about Kody Angle, the (actual) son of Kurt Angle.

1. Kurt Had Kody With His First Wife

Kurt and Karen were married in 1998. They began to go through marriage issues in the late 2000s, and there were rumors for some time that Karen was having an affair with Jeff Jarrett, the co-founder of TNA.

This all culminated in Kurt and Karen getting a divorce in 2008, and Karen married Jeff Jarrett in 2010. That drama was turned into an on-screen TNA storyline, with Karen Smedley being introduced in the show and asking for a divorce from Kurt Angle. She remained in TNA has a character after marrying Jeff Jarrett.

Kurt also had another child during his marriage to Karen: a daughter, Kyra Angle.

In 2011, Kurt Angle married Giovanna Yannotti, with whom he had three more kids: Giuliana, Sophia, and Nikoletta. Nikoletta was just born in November 2016. Angle has indicated that his relationship with Karen was not healthy, and he said of Giovanna in a recent blog post, “I had never had a healthy relationship with anyone else before, and Giovanna was my first ‘true love’ who made me realize how important it is to have a meaningful bond with someone else.” 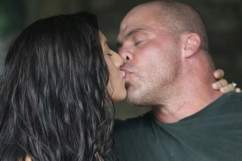 Celebrating an early birthday for my son #Kody. You're growing up so quickly. Proud of you Kodster! #Lovemykids #Kyra #Giuliana #Sophia

On Kody’s 10th birthday this past October, Kurt Angle said on Instagram, “You’re growing up so quickly. Proud of you Kodster.”

3. Kurt Says He Only Sees Kody Every Few Months

My kids, Kyra and Kody, are from Nashville. I'm from Pittsburgh. Who you rooting for? RT for Penguins. LIKE for Predators. #StanleyCup pic.twitter.com/ofiZhQG6K8

Kurt Angle says that he is only able to see Kody and Kyra, his two children from his first marriage, every few months. Still, Kurt says that this does not mean that he loves them any less than his three children that he sees every day.

“…[E]ven though I only get to see Kyra and Kody every 2-3 months, I love them every bit as much as my other 3 children,” Angle wrote on his website.

Kurt also said in this blog post that he regrets the fact that he was always on the road when Kody and Kyra were growing up, and so he was not able to spend as much time with them as he would have liked.

“My only regret is that I was hardly ever home when Kyra and Kody were little ones,” Angle said. “I was ALWAYS on the road wrestling for my tremendous fans. But I realize I can’t change my past. I can only control what’s in front of me now.”

That certainly seems possible, as according to Kurt Angle’s social media, his son is a fan of wrestling. In one tweet from 2013, Angle said that he thinks he son will be a wrestler and that Kody wants to work for the WWE or for TNA.

@KurtSteph87: He's gonna Be a Wrestler. I Was Hoping for Olympics, But Kody Wants TNA/Wwe.

In another post, Kurt called Kody a future wrestler for Impact Wrestling.

My Son Kody is the Best 5 Year old Wrestler in the World. It's true!

Watching #Slammiversary PPV with my son Kody. Wish I was wrestling tonight! @impactwrestling

At Impact Wrestling TV tapings with my kids, Kyra and Kody. #Lovemyfamily

In one Instagram post from 2014, Angle declared that his son will be an Olympic gold medal winner in 2028.

Kody Angle. With a Gold Medal! The next Olympic Champion. #2028 #Anglehungry

And Kurt has also joked that we will one day see a match between him and his son.

Angle vs Angle dream match. 1st time ever. Where? At the Angle household. #Kody #Lovemykids

Because Kurt Angle left the WWE in 2006, Kody Angle never got to see his father perform with this company. Kurt says that this was part of the reason he wanted to return this year.

“The other reason I wanted to return to WWE is so my little ones could see me up on the WWE platform, just once,” Kurt Angle wrote on his website. “My oldest child Kyra witnessed it before, but Kody, Giuliana, Sophia and Nikoletta did not. It was important to me that ALL of my 5 children could know who their father was, and what kind of impact he made in the business, even though my youngest, Nikoletta, is only 5 months old. Even though she won’t remember, she was there.”

5. Kurt Says His Children Helped Him Get Clean

The Angle Family hanging by the bonfire at the camp in the mountains. #Kyra #Kody #Giuliana #Sophia. #MemorialDay pic.twitter.com/FnSmc8Tky8

Kurt Angle was struggling with an addiction to painkillers when his son Kody was growing up. It wasn’t until eight years later that Kurt Angle went to rehab, and he has since said that he did so partially because of his children.

“My family saved my life,” Kurt Angle said on his website “I realized that I couldn’t stay in recovery focusing only on my career. But staying clean for my wife and kids made it a lot easier for me.”

Angle went on to say that the more children he had, the more he realized that abusing drugs and alcohol was childish.

“Family can make you feel like a king, and at the same time it can humble you and keep you grounded,” he said. “THAT is exactly what I needed in my life.”

In another post, Angle said that he continues to regularly take care of himself because of his wife and children.

“I think about my wife and kids, and it makes me want to live another 50 years…. for them. That is my motivation,” he said. “I now spend more time making proper meals, stretching each day, and doing things that will allow me to live a long, healthy life.”