An MRI of Big Cass‘ knee shows that he has a possible ligament tear that will require surgery.

The WWE released an official update on the superstar’s left knee injury Tuesday, and it said he suffered a serious injury during his street fight against Enzo Amore on the August 22 episode of RAW.

“It looks like he has an ACL tear, possibly a medial meniscus tear, but we’re going to wait for the radiologist to evaluate the MRI and give us their full report,” WWE’s physician Dr. Chris Robinson said to the company.

Cass, who made his main-roster debut April 4, 2016 alongside Amore, will undergo surgery that will put him out for at least nine months, Robinson said to WWE.

“It’s hard to tell what the extent of the injury is, but we’re going to send him to get an MRI tomorrow and figure that out,” he said.

He suffered the injury during a street fight the night after SummerSlam when Amore lowered the top rope, sending the 7-footer falling to the outside of the ring and hard to the gound with his knee taking the brunt of it. Cass was able to complete a majority of the match before the ref called a countout as doctors ran to his side.

The WWE also posted a video of him being helped back to the locker room and reappearing later with crutches and a knee wrap after the match.

After shining in NXT, the duo of Cass and Enzo made their way to the main roster and had their first match against The Dudley Boyz one night after WrestleMania 32. The two had been one of the best young tag teams in the company until Jun 19, when it was revealed it was Cass who had been faking injury and attacking Amore backstage prior to matches.

The revelation set up a feud between the two which cultivated with a match at Great Balls of Fire, when Cass defeated Amore.

At SummerSlam, the Big Show wrestled against Amore with him being locked into a “shark cage” that was suspended above the ring. Toward the end of the match, Amore applied what looked like baby oil on his body and slipped out of the cage. When he got down to the ring, though, he was greeted by a Cass big boot, which laid him out as he won the match. 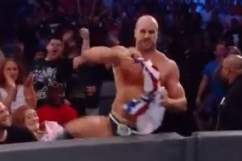 Read More
Wrestling, WWE
The WWE provided an update on Big Cass' knee injury. It turns out the superstar has what appears to be a torn ACL and will need surgery.