Cesaro stole a beachball from the Brooklyn crowd and ripped it to shreds.

Cesaro wasn’t a fan of the raucous crowd at WWE’s SummerSlam on Sunday.

In the middle a tag-team championship defense alongside Sheamus’ against Dean Ambrose and Seth Rollins, Cesaro charged into the stands, grabbed a beachball that was floating throughout the crowd and ripped it to shreds.

The act caused the crowd to initially boo, and they erupted into massive cheers and “Yes!” chants once they saw him do it.

Watch a video from the crowd and then the WWE Network coverage of Cesaro ripping the beachball below:

Mate… Cesaro was having NONE THAT DAMN BEACHBALL ? #Summerslam pic.twitter.com/PEkenaonuk

I'm forever in the Cesaro-section. The beachball section is in the parking lot. #RAW #WWE pic.twitter.com/8FpKFjupCc

Ambrose and Rollins got the last laugh, though. The former Shield members beat Cesaro and Sheamus after a crazy finish to become the new champions.

It marks the first time the duo has claimed championship gold together since they were part of The Shield. In May 2013, Ambrose, Rollins and Roman Reigns won the gold at Extreme Rules.

But Rollins turned on his so-called “brothers” and went on to win the WWE Championship.

In the weeks leading up to SummerSlam, there was a tumultuous relationship between the two with many teasers at a 2/3-Shield reunion. The two refused to shake hands and acknowledge they’d be a team.

But when Cesaro and Sheamus came calling, the two put their differences aside to team up and win the championships once again. 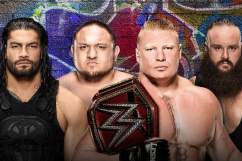 WWE SummerSlam 2017: The Results & Highlights You Need to Know