A source told WDRB News that the two have been put on leave until the next athletics association board meeting in October, where an official decision on their future will be made.

The report comes after federal investigators announced charges against 10 men who are accused of bribing the families of college recruits with hundreds of thousands of dollars in exchange for a college commitment. The stunning revelations came Tuesday, and Louisville announced hours after that it received notification that it’s under investigation.

After holding morning meetings with Pitino and Jurich, Postel announced he’d hold a press conference to talk about the latest details in the matter. The press conference is slated to begin at 1 p.m. Eastern and can be watched live at the top of the page or by clicking here.

Pitino was seen leaving his morning meeting with Postel hours prior to the press conference and didn’t have much to say.

While Louisville wasn’t specifically named in the federal indictment, the description in the court documents line up with the university. The Department of Justice alleges that several officials from the program worked with the school’s apparel sponsor, Adidas, to give $100,000 to the family of an unnamed recruit. That recruit appears to be McDonald’s All-American Brian Bowen.

According to the court documents, Louisville officials were also working with an executive from Adidas, Jim Gatto, to secure a payment for a future unnamed recruit who will graduate high school next year. In addition, the officials allegedly made sure to be cautious in a meeting that was secretly recorded by the F.B.I. One school official noted that Louisville was on probation so they had to “be very low key” with the payment.

Read the full criminal complaint below:

Pitino’s maintained that he knew nothing of the federal allegations and the alleged bribery of top-tier recruits to the school.

“These allegations come as a complete shock to me,” Pitino said in a statement. “If true, I agree with the U.S. Attorney’s Office that these third-party schemes, initiated by a few bad actors, operated to commit a fraud on the impacted universities and their basketball programs, including the University of Louisville.”

The bribery scandal comes just two years after it was revealed recruits who visited Louisville were often greeted with parties with strippers and prostitutes at a dorm. Pitino said he had no idea his assistant was paying and arranging the meetings for the recruits and held onto his job after the news.

However, Louisville laid down self-imposed penalties last year, putting the program on a one-year postseason ban in 2016. In July, the NCAA came down even harder on the program, placing it on probation for four years and suspending Pitino for the first five games of ACC play this upcoming season.

If Pitino does indeed get fired, that puts an end to one of the more storied coaching careers in college basketball. Pitino coached Kentucky from 1989-1997 before heading to the NBA to coach the Boston Celtics. After doing that for four years and lacking success, Pitino moved back to collegiate basketball and was named the coach at Louisville in 2001. 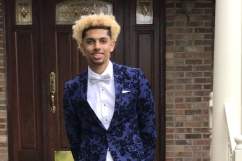