It didn’t take long for us to get the first LaVar Ball interview of the NBA season. LaVar joined Stephen A. Smith and Neil Everett on SportsCenter live at the Staples Center after the Lakers lost to the Clippers.

“It was a great opening night. Big Baller Brand went up 12 percent. It’s always good. Even when you lose, I win,” LaVar told ESPN.

This obviously had little to do with Lonzo’s average debut, and Smith pressed him further on his son’s performance.

“Lonzo did good,” LaVar went on to say.

This angered Smith who continued pressing.

“How? What game are you watching?” Smith asked LaVar to explain further.

LaVar went on to reference Lonzo’s bad foot. He also noted that Lonzo needed to “see what was in kitchen cabinet.” LaVar alluded to his son not having much help from his teammates, noting he could have scored 20 points running down the middle of the floor.

ESPN rolled the highlights from Lonzo’s debut, and asked him to breakdown the game. LaVar did little to offer hard hitting analysis, instead choosing to continue deflecting by offering quotable sound bites that had little to do with the game.

LaVar ended the interview by putting Patrick Beverley on notice.

“Tell Patrick, we’re going to see him when he has a home game. We’re keeping stats now,” LaVar said as he walked off the set.

Lonzo finished the night with three points, nine rebounds and four assists. He hit just one of the six shots he took. Lonzo was matched up with Beverley for most of the night, who was the aggressor throughout the game. 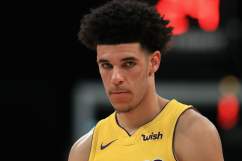