It’s safe to say that a majority of Tennessee Volunteer football fans weren’t happy with the hiring of Greg Schiano as the head coach of the football program. The announcement was made Sunday, and many Tennessee alumni and fans took to social media to protest it.

People cited Schiano’s history at Penn State during the Jerry Sandusky era, in which he served as an assistant under Joe Paterno. Schiano and others have denied allegations that they knew of child abuse committed by Sandusky in a 2015 deposition by former Penn State assistant Mike McQueary. McQueary said he was told Schiano was “doing something” with a boy in a shower.

Within hours, Tennessee officials announced they backed out of hiring Schiano. Yahoo News! reported that officials called Schiano’s representatives and told them they will rescinded the deal they made hours prior.

Schiano had a long history playing football at Bucknell before entering the coaching ranks as a graduate assistant at Rutgers before landing at Penn State. He worked for almost four years as the defensive backs coach for Penn State before making the jump to the NFL, coaching for the Chicago Bears. His longest coaching stint was at Rutgers, where he coached from 2001-2011. His last NFL coaching position was with the Tampa Bay Buccaneers, and he most recently has been the defensive coordinator for Ohio State.

Schiano, 51, is married to Christy, and the couple have four children together.

Here’s what you need to know about her and Greg’s relationship:

Christy, whose maiden name is Mitchell, met Greg when they both attended Bucknell. Greg played on the football team and graduated in 1988 with a degree in business administration. Christy graduated from the school in 1990. The two ended up getting married and have four children together: Joey, John and Matt (twins) and Katie.

Not much information about her private life is available on social media.

2. Like Greg, the Couple’s Son Plays Football at Bucknell

The Shianos’ son, Joe, played linebacker for Berkeley Prep in Tampa, Florida and was recruited to play FCS-level football. In high school, Joe averaged 10 tackles per game and was the team captain. He amassed 90 tackles as a senior and announced his intentions to follow in his father’s footsteps and play football at Bucknell in 2014.

Happy Birthday @BradMayesQB14 Enjoy it, my man. See ya in November ?? pic.twitter.com/4bKgBtcf0n

As a freshman, he didn’t appear in a game and didn’t as a sophomore due to injury. According to Bucknell’s 2017 statistics, he hasn’t yet appeared in a game in 2017 (his junior year).

Their other son, Matt, just completed his senior season at Berkeley Prep, playing outside linebacker and tight end.

Congratulations on a great start! pic.twitter.com/w5mqQ8RElP

When Schiano coached at Rutgers in 2011, he announced that his charity the Schiano Family Foundation was pledging $250,000 to the Rutgers Future Scholars Program, an initiative created to help youth from low-income communities successfully get through high school and college. The pledge was made on behalf of Greg and Christy through their organization.

According to GRAPHIQ, the Schiano Family Foundation is an educational organization based in New Albany, Ohio. In 2012, it received an exempt organization status from the IRS, bringing in a $234,000 annual income, the website reported.

4. Christy & Greg Caught up on Netflix Shows After He Was Fired as the Bucs Coach

In a Sports Illustrated profile, Christy described Greg’s everyday routine. His first job after he wakes up, Christy said, is to cook breakfast for their family. But sometimes the family aren’t fans of the breakfast spread, his daughter Katie said in the article after she poured a bowl of cereal.

“It just doesn’t look good,” she said to the magazine.

The family has a white lab named Fumble, which is described as being “nose-tackle sized.” Whenever they have spare time, like when he took a year off from coaching after being fired by the Tampa Bay Buccaneers, Christy told SI that they like to catch up on Netflix shows. Friday Night Lights, Prison Break and Breaking Bad are a few of their favorites.

“It took him a while to stop working from the time he woke up until midnight,” Christy said of Greg getting used to the downtime.

5. Christy’s Father Was 1 of the Most Successful Wife Receivers in Bucknell History

Christy’s father, Tom Mitchell, lost a battle to cancer in July 2017. He was one of the all-time greats in Bucknell’s football program. He played during the 1960s as a wide receiver.

In three varsity seasons (1963-65) at Bucknell, Mitchell tallied 2,358 receiving yards, catching 173 passes for 18 touchdowns. When he graduated, he set every receiver record for the school.

“Tom was the master of everything,” teammate Bobby Marks, who played quarterback, told the Bucknell athletic department in a feature story. “It didn’t matter what it was, he was the best at it. He was the best ping-pong player. He was the best at Whales Tales. He even dated and later married the sharpest, prettiest girl at Bucknell, Ella Weeks, who was the captain of the cheerleading team.”

Mitchell graduated from the school in 1966 and was drafted to play professionally for the Baltimore Colts. He helped the team win Super Bowl V during the 1970 season. His teammates said it was his route-running ability that made him such a great player.

“He always got open, and he always wanted the ball,” Marks said in the profile.

When he passed away, he was survived by Patricia, his second wife of 22 years. Christy was one of four kids (three daughters and a son). 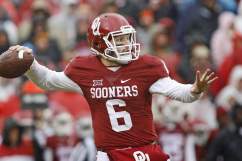 Read More
NCAA Football, Tennessee
Greg Schiano was announced as the new coach for the University of Tennessee. The hiring has been met with massive protest. He's married to Christy Mitchell.