People seem to enjoy smashing other people’s faces in. We prefer to watch animated crooks, clowns, and robots get punched into nothingness on our TV screens. Better yet, we prefer to do it ourselves through the use of a control pad or an arcade stick.

Beat ’em up video games have been around for a mighty long time and they’re still as enjoyable as they were during its Golden Age. Walking from left to right and smashing all manners of baddies with your friends equals unlimited amounts of fun.

We’re going to honor this addictive gaming genre by counting down the 25 greatest beat ’em up video games.

We must pay respect to this beat ’em up OG. Gauntlet is the first multiplayer dungeon crawler ever released in the arcade scene. Four players were tasked with exploring a bevy of dungeons filled with ghosts, demons, and nasty thieves. The addictive nature of this game came from the constant flood of enemies and the cool ways you could entrap your enemies into a severe beating. One other cool factor – the narrator who would let you know who needs food…badly. Thanks, Atari!

Konami was on top of the gaming world during their epic beat ’em up run. This Japanese gaming company did the unthinkable by creating a super fun arcade game that let you beat up goons with a certain animated family. Those goons ended up facing the wrath of America’s most popular yellow skinned cast, The Simpsons. The game’s bright, cartoony visuals represented the show perfectly. Plus the humor stayed intact, since you could smack dudes around with Marge’s vacuum cleaner and whip fools with Lisa’s jump rope. The minigames were an extra cool diversion that added to the fun factor of this beat ’em up.

River City Ransom stands out for being innovative in its approach to beat ’em up’s. Of course you were tasked with putting your avatar to good use by using your fists and feet. But the game allowed players to explore a wide open sandbox area and purchase new moves to use in battle. Running into different colored gang members was the norm of this game, but we had no problem fending them off with Alex and Ryan. This beat ’em up is deeper than most games in the genre. And that’s why it’s still regarded so highly.

22. Captain America and The Avengers

Marvel’s long line of iconic heroes are totally fun to read about. But they’re even more incredible to play as. One game that let gamers take control of Marvel’s finest was Captain American and The Avengers. For this comic book-themed romp, the Red Skull gathered a large group of super villains in his attempt to rule the world. Captain America enlisted the aid of Iron Man, Hawkeye, and the lesser known Vision in his fight against absolute evil. The gameplay was definitely a blast, thanks to the cool visual cues (KRAK!) and character cameos (The Mandarin, Ultron, Klaw etc.). Comic book beat ’em up’s like this one satisfied the violent geek inside us all.

Fun fact: Captain Commando’s lead character was originally slated to be Capcom’s USA mascot. We’re glad Capcom decided he’d be much better in a lead role as a badass superhero. This beat ’em up is pretty similiar to Final Fight, but it’s wild cast of combatants made this brawler a memorable one. Captain Commando’s team included a badass ninja, an assassin dressed as a mummy, and a baby controlling a mech. Weird, huh? Maybe. But don’t let that keep you away from this fine Capcom beat ’em up. Baby Head FTW! Cap. Commando knows his way around beat ’em up’s and a few notable fighting games.

Night Slashers is one of the more eccentric beat ’em up’s on this list. This game’s plot was inspired by a horror theme, since you were tasked with smashing zombies and other supernatural enemies. Jake, Christopher, and Hong Hua made their way across the screen to kill familiar monsters like Dracula and The Grim Reaper. Data East is famous for putting out some of the best arcade games we’ve ever played. This undead brawler is one of their better efforts. Three players against an army of the undead is always a good time.

19. Knights of the Round Table

For anyone who enjoyed Golden Axe, here’s another fantasy-themed beat ’em up that you’d probably like. Capcom adapted the famous tale of King Arthur and turned it into a chaotic video game that was hard to put down. Each warrior had different stats, so you’d know exactly what kind of character you’d be taking into the next melee. Plus, you got to kick ass with horses. HORSES! King Arthur’s wrath was taken more seriously when his enemies took a a couple of hoofs to the face. Knights of the Round Table is a deep beat ’em up that let you level up your characters and block all incoming attacks. Go find this game if you haven’t already.

Any nerd worth his dice roller should have a clue about the Dungeons & Dragons franchise. D&D is a role playing game that was played a tabletop adventure. We’re sure most of you super old school heads played a marathon run of this game back in the day. Capcom acquired the licence and threw the game’s elements into a frantic side-scrolling adventure. There was a huge array of mystical heroes to choose from (Cleric, Dwarf, Elf, Fighter, Magic-User, and Thief), plus there was plenty of treasure to discover. You could go nuts with the game’s special moves if you knew a little something about Street Fighter’s control motions, too. Capcom is re-releasing this beat ’em up real soon, so take the plunge on this fantasy brawler.

You can do anything when you’re Batman. Clowns cower at the sight of your appearance and even thugs on motorcycles don’t stand a chance against you. Getting to be “The Dark Knight” was captured well by this Sega Genesis/SNES video game adaptation of the Batman Returns film. All the cool things that Batman could do were captured in this game. You could fling batarangs in ever direction, use your fists to deliver justice, and even ride in the Batmobile and shoot everything in sight. Cartoons based on movies/cartoons are usually never that good, but Batman Returns is a welcome change to that norm.

First things first – we gotta show some love to the extra special red cartridge for this game. Spider-Man and Venom: Maximum Carnage took its story from an actual Marvel Comics storyline, so comic book fans got to play in some familiar territory. Getting the chance to body slam inner city youth with Venom was worth the price of admission by itself. The cameos from super dudes like Iron Fist and Captain America made us all geek out a million times. It’s crazy to think that this beat ’em up received a “Teen” rating, but its dark theme/visuals were certainly not for the kiddies upon release. This brawler is a quality one, folks. 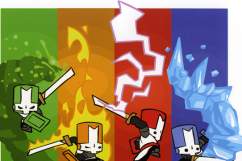