There are a lot of complex mobile games on the market today, however, if you’re looking for a simpler title consider picking up Ballz by developer Ketchapp Games. This game tasks the player with launching a single white ball at a line of numbered blocks in order to destroy them before they reach the bottom. As the game goes on, users can acquire more and more balls to fire in a line.

While this sounds easy enough in practice, there is a lot of complexity and nuance to how you manipulate the physics of the game. Understanding where to fire your orbs and how to maximize your impact will separate the novices from the masters. Here are 5 tips to improve your game and raise your high score in Ballz:

Ballz is very much a game of chance early on, as the board given to players can be really easy to manage or an absolute nightmare. If it’s the latter, we recommend resetting your game until you have better luck with the blocks dropping down. Typically you want to be able to clear level 10 with little to no effort, otherwise, you are seriously going to struggle as the game progresses.

What you want is to be able to collect a lot of extra balls so you can handle numbered blocks in the mid teens or early twenties. This game can get seriously out of hand, so if you feel like your game is unlucky just hit that reset button. Since a single round takes less than thirty seconds you won’t be wasting a lot of time. 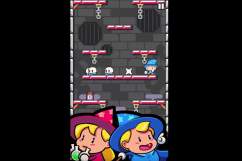 Drop Wizard Tower: 5 Tips and Tricks You Need to Know

2. Work From Top to Bottom

When you’re starting out it can be tempting to only launch your balls at the bottom row, as they will typically appear to be the biggest threat. Yet, this is something you typically want to avoid as there is very little opportunity to take out more than one or two blocks. Instead, try to always launch your balls at the backline since this will cause them to ricochet up and down. This will cause your stream of orbs to destroy multiple blocks all while working their way down to the front row. Whenever possible try to work from top to bottom so you can maximize your score.

It can be tempting to just fire your projectiles at the various number blocks without concern, however, if you want to raise your high score you’ll need to learn the game’s physics system. There’s no time limit, so be patient and line up your shots before you fire. If you cannot hit more than one block per shot then you will want to reevaluate your trajectory. Remember, you can fire the balls at an extreme angle, allowing you to hit multiple targets by bouncing off the walls. You can also pull back on the screen when you are aiming to get a more accurate idea of where your first shot is going to land.

Players should try to use the corners and sides of the level for free bounces so you can hit a block multiple times. This is one of the best ways to ensure you take down high-level squares in a single move and don’t  become overwhelemed early on.

A key component of Ballz is acquiring more orbs so you can take out higher level blocks in one shot. These are critical as some blocks will number in the 40s and 50s around the level 30 mark. This makes it imperative that you obtain as many extra balls as possible, especially early on. Always go for the solid white circles when they pop up, as nabbing one will add an extra round to your chain. Typically these orbs are in harder to reach areas, so take your time and line up the shot to ensure you don’t miss.

5. The Yellow Circles Do Not Matter

During your playthrough of Ballz, there is little doubt you came across random yellow circles that appear during a match. While it might seem tempting to nab one, don’t waste your time as they offer nothing but a way to buy variations of your balls. Since these do not affect the gameplay in any way, I recommend just ignoring them and focusing on destroying more blocks.

If you can grab them along the way that’s always nice, but there’s really no need to obtain them. There are also microtransactions if you really want to buy a new look for your ball, but again it’s completely unneeded. 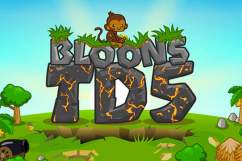 Bloons TD 5: 5 Tips and Tricks You Need to Know