The words “Ready? Whallop!” has been seared into my brain over the past two days as I attempted to maneuver my little cartoon figure around some very angry monsters. These are the first words you see whenever a boss fight in Cuphead begins and anyone diving into this game will grow intimately familiar with them. Developed by Studio MDHR, Cuphead is a love letter to both 1930s animation and the side-scrolling arcade genre. Sporting some truly gorgeous art direction, Cuphead is a game that bleeds nostalgia from every hand-drawn cell and character. Even though the gameplay does suffer from some mechanical issues, this is shaping up to be one of the most memorable games of this generation.

Embracing everything retro, the story follows the brothers Cuphead and Mugman who run off to a mysterious casino. After a win streak, the duo is challenged by the devil in a winner’s take all game and lose. Forced to pay off their debt, the two must venture out and collect souls of those who tried to run from this infernal being.

Much like 1930s cartoons, Cuphead’s story is told through music, visuals, and some brief text dialogue that lends context to some moments. However, the story is rarely touched upon, with many sections and characters kept at the bare minimum. While this would normally be seen as a bad thing, Cuphead instead uses this breathing room to allow it’s  gameplay to take center stage. It also helps that many of Cuphead’s characters are incredibly memorable and will stick with you long after the game is over.

Comprised of around 75% bosses and 25% traditional side-scrolling levels, players will hope through three different islands, taking on those who owe the devil. Each island has a distinct theme that is not only reflected in the Super Mario Bros styled hub world but the various bosses that inhabit it. Visually each stage is gorgeous and feels wholly unique that keeps Cuphead always feeling fresh. I found my primary driving force for finishing was to see what crazy area Studio MDHR had cooked up next. There are some truly eye-popping moments that might just make you stop and stare in awe.

You won’t want to stare too long though, as Cuphead has perhaps some of the most challenging gameplay of the entire year. Boss fights are comprised of multi-stage battles that will have you juggling a variety of different attack patterns and projectiles. Given you can only sustain three hits before it’s lights out, mastering Cuphead’s jumping, parrying, and firing is critical to your success.

Combat has a unique rhythm to it with every battle offering up unique hazards such as a falling barrel, constantly scrolling stage, or movable platforms. When it all clicks, the moment to moment gameplay is incredibly exhilarating and offers a deep sense of satisfaction after clearing a tricky section.

However, this difficulty is a double-edged sword and Cuphead doesn’t escape without a few cuts of its own. While many of the boss encounters are exhilarating, a few rely too much on luck which causes some seriously frustrating deaths. There are moments where the game gives you no choice but to get hit and die despite your best efforts. A high difficulty is more than expected in a side-scrolling shooter, but Cuphead sometimes loses focuses and muddles that important sense of balance.

Players can purchase additional weapons and special abilities that can change how you approach each fight. Not every weapon is good for each boss so it’s important to not only recognize but adapt to the different limitations each enemy has. You earn these skills by collecting coins during the few run and gun stages scattered across each island. These sections are incredibly entertaining, yet they feel too sparse and get lost amongst all the bosses. While they were clearly added to add a bit more variety into the gameplay, it’s never enough to truly standout.

There is also a co-op component, however, it’s currently only limited to local play only.  There’s also very little reason to actually replay Cuphead once you finish it unless you want to challenge yourself or obtain higher ratings. This makes Cuphead an enjoyable but ultimately limited experience, especially if you are playing by yourself.

I also encountered several minor bugs during my time, such as a progress bar not working at the end of a stage and several projectiles getting stuck in an endless rotation. Thankfully, there were no dropped framerates or major game breaking problems that tarnished my overall experience.

Ultimately, Cuphead is a unique and extremely entertaining experience that is only marred by a few issues. Despite some minor bugs, a few slightly unbalanced boss encounters, and a small number of side-scrolling stages, Cuphead emerges as a solid indie game for the Xbox One.  This is a game that wears its difficulty like a badge and it’s remarkable how balanced the majority of it is.

Despite the minor gameplay issues, Cuphead completely delivers in terms of visuals to the point where you might briefly forget that the year is 2017 and not 1930. It honestly cannot be stated enough just how amazing the art and sound are for this game. Even if this title proves too difficult for you, Cuphead is absolutely a must try for anyone who owns an Xbox One. 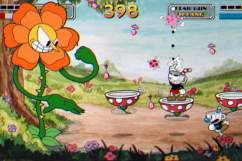