Much of today is focused around the release of Pokemon Gold and Silver on the Nintendo 3DS Virtual Console, as it should be, but don’t let that distract you from the new trailer showcasing some new things to do in Pokemon Ultra Sun and Ultra Moon.

One new feature it shows off in the roughly minute and half long trailer is the brand new Alola Photo Club. It’s quite simply in terms of how it works. You choose the Pokemon you want to appear with you in the photo, as well as your clothes, background and camera angle as you try to get the best snapshot of you and your Pokemon. You’ll then be able to add frames and stickers to your photo after you’re finished and share them with friends. Taking photos with your Pokemon will make them more affectionate toward you which will help them perform better in battle.

The second thing shown off in the trailer is the Mantine Surf. This new feature isn’t just a way to get between islands but it’s actually a full-blown sport being introduced into the game. The trailer does a better job of describing this than we do so we recommend watching the trailer to get a better feel for what it is. Basically, you’re just riding the waves on top of a Mantine all while competing for the highest score by pulling off different moves.

While these two things were the focus of the new trailer, there’s also a lot more that will be new in Pokemon Ultra Sun and Ultra Moon. Some of the new features include new Z-Moves, a new story, new Pokemon and more. Head over to our post-Pokemon Direct write-up for more information about the upcoming games.

A dual-pack has been announced for those of you who plan on picking up both games. For $79.99, which is the price of the two games put together, you’ll get both titles plus a digital download card for 200 Poke Balls and 16 art cards.

There’s also a pre-order bonus for the game if you get it through the Pokemon Center. At no extra cost, players will be able to pick up a Rowlet, Litten or Popplio – the three starters from the Alola region – keychain plush. Unfortunately, you don’t get a choice of what keychain you’ll receive and the offer is only good while supplies last. The keychains themselves retail for $9.99. 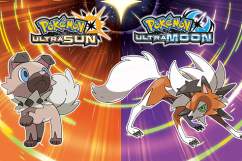