Nintendo just announced a radically different experience on the Nintendo Switch known as Nintendo Labo, combining the console itself with DIY cardboard cutout. Players essentially craft their very own peripherals to use on a variety of games.

1. You Can Create Your Own Peripherals

A trailer livestreamed on January 17, 2018 gave players an idea of Nintendo Labo’s features. You pop out pieces of the peripherals – called Toy-Cons – out of cardboard sheets and assemble them according to instructions on the Switch’s screen. After you assemble the Toy-Con, you slide the Switch and its Joy-Con controllers into the Toy-Con in order to play different games.

“Nintendo Labo continues our longstanding mission of making people smile by surprising them with new experiences,” said Nintendo of America’s President and COO Reggie Fils-Aime in a press release. “It is an exciting evolution of the Nintendo Switch platform – one designed to inspire curiosity, creativity and imagination in people of all ages.”

The trailer showed off Toy-Cons not included in the Variety Kit or the Robot Kit, including a camera, bazooka, bird, car steering wheel, and more. This could possibly point to content in future kits.

People have taken to Twitter to express their excitement over Nintendo Labo as well as a few criticisms.

2. The Switch Has Already Seen Success But This Year Is “Crucial”

The Switch has been a big success since its release last year, boasting over 10 million units sold as of December 2017 according to Polygon.

However, Nintendo have expectations of the Switch doing even better. Nintendo president Tatsumi Kimishima told Japanese newspaper Mainichi (as reported by Nintendo Everything) that the new worldwide sales target for the Switch this fiscal year is 20 million units. “In order to be playable in the long term, the second year is crucial,” he said. “Our task is to add more users, including people who barely touch game consoles.” Nintendo Labo appears to be an attempt to expand the Switch’s game library and take in new players as Kimishima said.

3. Here’s How Each Toy-Con Works

The Toy-Con RC Cars use the HD Rumble feature of the Joy-Cons inserted on each side to move, according to a press release. You can control their movement with the touch screen controls of the Switch. The Variety Kit comes with two cars.

The Fishing Rod comes with a rotating wheel that is attached by a string to a cradle holding the Switch, according to a press release. You cast your rod and unwinding the reel to lower the virtual hook. The rod vibrates with the Joy-Con’s HD Rumble when you get a bite, and by tugging the rod upwards and cranking the wheel you can attempt to catch virtual fish.

The Toy-Con House lets you feed, interact with, and play games with a virtual resident on the Switch’s screen, according to a press release. You can interact with the resident by inserting assembled blocks into openings in the sides and bottoms of the House, which is detected by the IR Motion Camera on the right Joy-Con inserted on top of the house.

The Motorbike handlebar is controlled via the Joy-Cons inserted into each handle, according to a press release. After pressing the ignition button, you accelerate by twisting the right handle and turn by leaning your body left and right.

The Piano uses the IR Motion Camera to sense the movement of each of the 13 keys, which is then translated into musical notes heard through the Switch according to a press release. You can also insert different assembled knobs to create new sound effects and tones.

The Robot suit included in the Robot Kit has you inserting the left and right Joy-Cons into the slots on the backpack and visor while keeping the Switch in the dock, according to the press release. The kit lets you control the robot on the TV screen with your arm and leg movements, making it knock over buildings and UFOs.

4. These Aren’t the First Toys Nintendo Made

Nintendo Chiritori – retro toy vacuum cleaner – 1979 (無線クリーナー チリトリー)For for more info on this and other Nintendo toys please visit blog.beforemario.com/ facebook.com/beforemario This is without a doubt one of the stranger Nintendo toys: a remote controlled vacuum cleaner. Another brainchild of inventor genius Gunpei Yokoi. Released in Japan in 1979.2011-03-14T19:16:19.000Z

Nintendo Labo is marketed as a series of toys, which can be surprising for a video game company. However Nintendo wasn’t always making games or consoles.

Founded on September 23, 1889, Nintendo began as a company manufacturing hanafuda, or Japanese playing cards, according to Wired. In fact, according to the publication, Nintendo is still the predominant playing-card maker in Japan, still producing hanafuda decks with some of them sporting Super Mario characters.

After a bunch of failed venture investments including a taxi company and even love hotels according to Kotaku, Nintendo started investing in toys in the 1960s. Notable toys include the Ultra Hand, the Love Tester, the Beam Gun, and a toy vacuum cleaner known as the Nintendo Chiritori. Nintendo even created a series of paper models in 1974, which might be a precursor to Nintendo Labo. According to Wired, Nintendo partnered with hardware maker Sharp to create the toys and are still partnered to this day.

5. This Isn’t The Only Big Nintendo News Announced This Month

Check out Heavy for more gaming content including news, reviews, guides, and more. 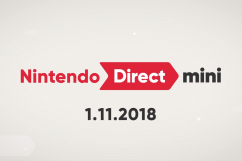 Nintendo Direct January 2018 Recap: All the News You Need to See