After reading the disturbing news regarding the DreamKazper suspension this morning, Heavy decided to do some further digging and has uncovered even more disturbing details — this time from a second accuser, who says she is a 16-year-old girl.

Heavy is not identifying the second accuser, and has blurred her username along with any other identifying information by for safety purposes and will only be referring to her as an anonymous girl.

Another girl made accusations (backed with screenshots) that the now former Overwatch League player solicited pictures from her while knowing she was just 15 years old. DreamKazper, whose real name is Jonathan Sanchez, is 21.

Now, a second girl — this time 16 — has come forward. In her own words, the girl told Heavy the following, talking about Jonathan “DreamKazper” Sanchez and his solicitation of pics and a meetup:

“He was messaging/facetiming/etc with me. He told me he liked me and even bought me a plane ticket to go and see him, pressured me to send him nudes, etc…”

Here are the details we’ve uncovered. First, Sanchez purchased this 16-year-old girl airline tickets to meet up, the girl says. Before they actually met up, the girl cancelled last-minute, claiming her mom wouldn’t let her actually make the trip.

Below, you’ll find a few bits from the conversation provided to Heavy, showing that Sanchez offered to pay and was aware of her age (claiming he is just two years older).

Here is a copy of the airplane confirmation email:

On top of that, Sanchez also solicited “jaw dropping pics” from this young girl as well, she says.

The girl also provided snapshots of her sending the pics (with giant emojis on top of them as to protect herself, of course) and his response to those pics. However, Heavy will not be posting those.

The age of consent in Atlanta (where the girl is from) is 16 years old. However, the AOC in California is 18 years old. According to federal law, “knowingly using a telecommunications device to make, create, solicit, or initiate transmission of any comment, request, suggestion, proposal, image, or other communication which is obscene or child pornography, knowing that the recipient of the communication is under 18 years of age, to harass any person.”

Federal law also says, “Using the mail or any facility or means of interstate or foreign commerce to entice or coerce someone younger than 18 years of age to engage in sexual activity is a crime punishable by fine and not less than 10 years imprisonment or life.”

Sanchez has not been charged with a crime and it is not known if police are investigating the accusations against him.

This is still developing, and Heavy is still getting more information from the source, and will update accordingly. Heavy is told she has been in contact with Sanchez since February, and as recent as just two days ago.

Sanchez has not commented about the accusations.

Overwatch League tweeted Sunday, “Earlier today the Overwatch League was made aware of the allegations against Jonathan “DreamKazper” Sanchez. He is suspended indefinitely while the league investigates this matter.”

Boston Uprising also tweeted about it:

Statement from the Boston Uprising: pic.twitter.com/N06NmoDgfI

His contract with the team was later terminated:

The Boston Uprising has terminated the contract of Jonathan “DreamKazper” Sanchez.

This post will be updated with more information as the story on just the latest controversy to hit the Overwatch League develops. 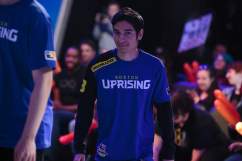