A Crackdown 3 review code was provided by the publisher.

The wait for Crackdown 3 has been a tumultuous one. A dizzying number of delays have come its way due to changes in development teams and the difficulties associated with the game’s reliance on Microsoft’s cloud-engine powered destructibility. It’s crazy to sit back and think back on how long fans have waited to finally get their hands on a new entry in the Crackdown series – Crackdown 2 launched all the way back in 2010, while the initial reveal for Crackdown 3 took place at E3 2014. Five years later, the next first-party IP title for the Xbox One has finally turned into a finished product that’s ready for consumption. However, it’s quite evident that Crackdown 3 doesn’t live up to the hype surrounding it.

Crackdown 3 is split up into two main modes of play – a single-player campaign (which can also be played in co-op) and an online multiplayer component (Wrecking Zone). The single-player portion is a retread of everything you’ve already done in the previous Crackdown games. You’re a super-powered agent who’s tasked with toppling an element more powerful than simple street gangs – this time, you’ll need to take down an evil mega-corporation. It just so happens that this super corporate entity has control over an entire city, which means you’ll need to raise hell in different sections of your new main locale to rip power away from the powers that be. Doing so entails performing all sorts of destructive tasks, such as shutting down power plants, taking control of company controlled monorails, freeing resistance soldiers from lockup, etc.

If you’ve played the last two Crackdown games extensively, then you know what’s in store for you here. Your agent jumps to insane heights, collects stat-boosting orbs, flings huge objects at enemies, and gains access to an impressive armory over time. While there is a modicum of fun to be had from upgrading your agent and blowing everything up around you, the gameplay loop feels a bit tired in this day and age. As a sequel, Crackdown 3 doesn’t add anything fresh or innovative to the action as a whole.

The cliché villains, lame jokes, and mission types that never seem to switch things up hamper the single-player experience as a whole. While it’s still cool to see your agent evolve into an unstoppable killing machine, you’ll gradually lose interest in your mission as you’re asked to take down yet another power plant. The climactic boss battles, stunt driving excursions, and platforming challenges are slightly more interesting. But they still reflect repeated mechanics that have already been done to death in previous entries.

The cel-shaded look that Crackdown 3 retains from the last two games in the series looks impressive in action. Terry Crews’ likeness has been adopted wonderfully for the main agent in play, each section of New Providence maintains its own visual theme, and the explosions always deliver their desired effect of “damn, did you see that?” The denizens that reside within New Providence don’t look equally as good as the agents you use, plus the overall activity you come across within the hub world is pretty non-existent. New Providence doesn’t truly feel alive due to its lackluster AI, but the neon-lit architecture gives it the extra flair it needs. Crackdown 3 may look decent in some parts, but its graphics pale in comparison to the more standout open-world titles of the current-gen.

The much-ballyhooed “power of the cloud” is nowhere to be seen in the single-player campaign. However, it’s put to great use within the competitive multiplayer Wrecking Zone mode. Wrecking Zone throws you into a 5v5 battlefield where things go boom and break into pieces on the regular. You and your team of fellow super agents are pitted against a rival team during a team deathmatch or king of the hill mode variant. Without a doubt, Wrecking Zone is the light that shines brightest when talking about Crackdown 3’s overall content suite. The chaotic battles within it offer up tons of fun as you get to destroy every piece of architecture and utilize your agent’s maxed out maneuverability techniques. Getting your hands on the best weapons and abilities from the start instead of having to work for them is a major part of the appeal that comes from Wrecking Zone.

The one main gripe that comes from Wrecking Zone is the map you’re forced to do battle within. Instead of traversing maps that are stylized after the different sections from New Providence, you’re thrown into a locale that’s more of a computer-simulated training module. The main Blackout Zone makes you feel as if you’re playing on some sort of unfinished stage that still needs some animation work. Since it’s the only one available at launch, this aspect of the multiplayer is a huge letdown. The fun that erupts from the matches themselves and the wild destruction you can cause should distract you enough from the lackluster environment you’re forced to compete in, however.

The painful wait for Crackdown 3 has definitely put a damper on the final product. For those hoping that the game would over-deliver and move away from its negative public reception, prepare to be disappointed. Crackdown 3 delivers some fun bits in the single-player and multiplayer sections – those famous agents and their penchant for destruction are still as entertaining as ever. The tired mission structure and lack of fresh takes on legacy gameplay make the main campaign feel like something that belongs in a last-gen release.

The cel-shaded visuals give Crackdown 3 the signature style it needs, which looks great as a part of the environments and architecture featured in the single-player campaign. However, the unfinished feel of the multiplayer mode’s main map leaves a lot to be desired. The high destructibility factor lends Wrecking Zone that sense of addiction that keeps you playing beyond its launch, however. Crackdown 3 as a whole is clearly flawed and more of a mid-tier 1st-party exclusive. There’s some fun to be had, of course. But its overall staying power is a step below other open-world games of its ilk. 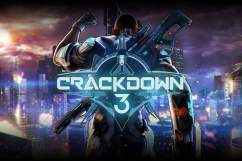