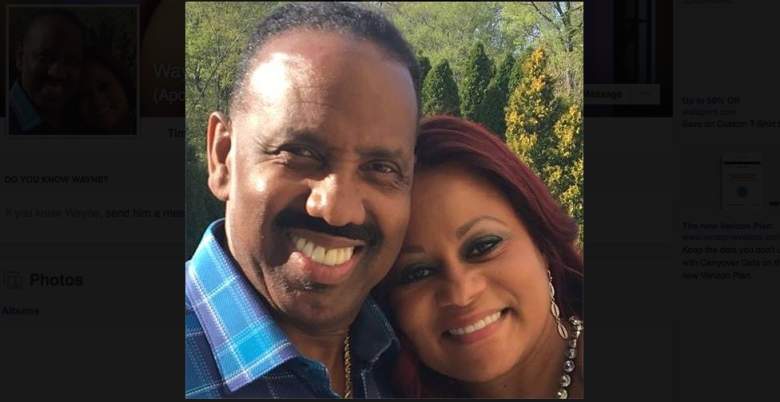 Bishop Wayne T. Jackson, pastor of Great Faith Ministries International and president of The Impact Network, is interviewing GOP presidential candidate Donald Trump on Saturday in a closed-to-the-public service. The interview, also closed to the media, won’t air for at least a week, according to the Detroit Free Press.

After his interview with Jackson, entitled “Voice of the People,” Trump is scheduled to tour Detroit with former GOP presidential hopeful Ben Carson.

“This interview is NOT a rally or an endorsement for Mr. Trump,” Jackson said in a press release. “This is an opportunity as a community to get answers to questions that seriously impact our daily lives and future. Our community is diverse and not all issues relate to all black people, but our goal is to address those issues which our most pressing to parts of our community in these times.”

Jackson submitted his questions to the Trump campaign before Saturday’s interview and a draft of Trump’s responses was leaked to the New York Times, which ranges from racial tensions, charges of Trump being a racist and Trump’s vision for black America.

Jackson is a registered Democrat who has contributed thousands of dollars to Democrat Congressional candidates throughout the years, including former Rep. Carolyn Kilpatrick, whose son, disgraced former Detroit Mayor and felon Kwame Kilpatrick, once recognized Jackson in the Michigan House of Representatives for his work in the faith community.

Married to wife Beverly Bozeman-Jackson, the minister inherited from his father-in-law Great Faith Ministries, which says its services “are unlike any other service around.” His television channel, the Impact Network, reports to the IRS that its spends more than it brings in, year after year.

Here is what you need to know about Jackson, the man interviewing Trump on Saturday:

1. In ‘Voice of the People’ Interview, Jackson will Confront Trump about Racism 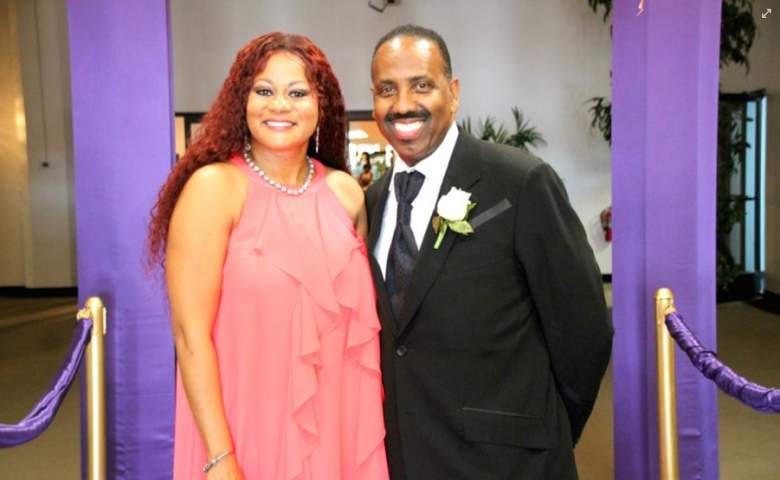 Jackson, right, with his wife, Beverly Bozeman-Jackson. The minister will confront Trump about allegations of racism. (Facebook)

Trump’s visit to Motor City includes stopping by Jackson’s church, Great Faith Ministries International, and answering questions in an interview format in front of the congregation during its Saturday worship service. Initially, it was believed Trump was going to address congregants, but the Republican candidate will instead just handle questions in the one-on-one format with Jackson, according to the Detroit Free Press.

The discussion will range from Trump’s proposed policy changes to how he will address racial concerns in America. In a leaked document to the New York Times, Trump’s draft script says he will “make race disappear as a factor in government and governance.”

“Every individual, regardless of race or ethnicity, must have access to the full array of opportunities in America. My vision for America is that every citizen and legal resident of this nation will be able to stand side by side and be proud of the fact that they live in the greatest nation on earth,” the draft reads.

Jackson, in his questions that were submitted to Trump’s campaign before the interview, will ask if Trump is, in fact, a racist.

“Mr. Trump there is a perception that your administration is racist,” the questioning states. “With many of the African American voters their belief is that the Republican Party as a whole does not cater to African American needs. In 2008 and 2012 we had two Republican Candidates John McCain and Mitt Romney and neither one of them came to Detroit, or any urban area that I can remember to even address the concerns of our community. First I would like to commend you for coming to our community as a Republican Candidate. Second I need to know how would you change that perception in our community?”

Trump’s draft response doesn’t directly say anything about racism. Instead, it states: “The proof, as they say, will be in the pudding. Coming into a community is meaningless unless we can offer an alternative to the horrible progressive agenda that has perpetuated a permanent underclass in America. We need to be true to our word and offer all Americans more opportunities so that each and every one of them can reach their full potential.” 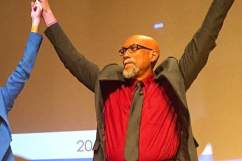 2. Jackson Said He Doesn’t See A Problem With the Trump Interview Format: ‘They Haven’t Paid Me Off’

Jackson’s wife, Beverly Bozeman-Jackson, and the minister. Jackson doesn’t have a problem with asking Trump questions instead of Trump’s free-wheeling address-style. (Facebook)

Asked by Free Press columnist Rochelle Riley why he would allow Trump to come on his network, the African-American minister said “I owe this to my viewers.”

According to the columnist, Jackson is being accused by colleagues of giving Trump credit by inviting him to his congregation.

In a separate interview, Jackson said interviewing Trump is comparable to having the Republican address his congregation.

“My congregation trusts my judgment. They know that I’m not going to put anything or anyone in front of them that I feel is going to be harmful, and I feel we should have an educated conversation about what you’re going to do,” he said. 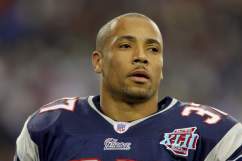 3. Jackson Has Given At Least $12K to Democrats, Has Been Called ‘Dedicated’ & ‘Unselfish’ by Politicians

Jackson, in his questions to Trump, says he is a registered Democrat but is an undecided voter in 2016. Campaign finance records, both federally and in the state of Michigan, show Jackson and his wife have donated more than $12,000 to Democrats since the 2000 election.

Jackson has contributed $1,500 to former U.S. Rep. Carolyn Kilpatrick, mother of disgraced former Detroit Mayor Kwame Kilpatrick. Kwame Kilpatrick, before being convicted on corruption charges, was a state representative in Michigan. He offered a resolution to the Michigan House of Representatives in 2001 praising Jackson for his work in the community.

“In his long and devoted efforts to provide spiritual and personal guidance to others through the ministry, this dedicated and unselfish man has touched many lives through the power of faith. Gifts like these are important to everyone,” the resolution formally honoring Jackson states. “…Bishop Jackson has truly enriched this community and we commend him and express our respect for him.” 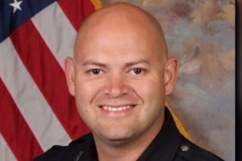 4. Although Jackson’s TV Network Brings in $1.5 Million, Records State It Has Finished in the Red

The television network airing the Trump interview with Jackson, The Impact Network, is owned and operated by Jackson, his wife and other ministers. The nonprofit reported $1.59 million in revenue in 2014 but $2.6 million in expenditures, finishing the year $1.04 million in debt.

That reported revenue was down from the prior year, 2013, where The Impact Network pulled in $1.66 million and spent $2.03 million — finishing more than $360,000 in the red. The nonprofit doesn’t detail who or where it spends its money.

Although the nonprofit’s reports to the IRS only show Jackson’s wife, Beverly Bozeman-Jackson, as a paid director at $1,000 per year for an average of 20 hours per week, the network reports $206,655 in employee-related compensation in 2014, the last year of available documents. 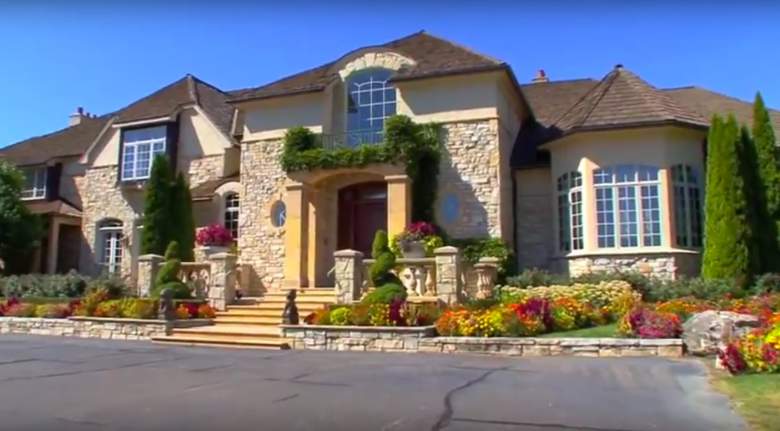 Jackson and his wife have owned a 9.68-acre estate in Northville, Mich. A YouTube video tour of the house, posted in 2010, shows all the 6-bedroom, 10.5-bathroom mansion has to offer, from a par-3 golf hole to a bowling alley and wine tasting room:

Before moving there, records show the couple’s address as 1880 Wellesley in Detroit, which is known as the Bishop’s Residence. The home, on the state historic registry, was once owned by Detroit Piston John Salley.