Donald Trump called a Jewish reporter a “liar” at a press conference on February 16.

Trump’s exchange with reporter Jake Turx made headlines; at the end of the press conference, Trump took a question from Turx about anti-Semitism, only to interrupt him, call him a liar, and tell him to sit down.

Forward Magazine described Turx as a “reporter for a small ultra-Orthodox publication.”

Trump clearly didn’t like the premise of Turx’ question, which queried the president on a supposed rise in anti-Semitism since the presidential election.

At one point, the president even called Turx a liar. A reporter for Ami Magazine, Turx started his question by telling the president that he hasn’t seen anyone in the Jewish community accusing him or his staff of being anti-Semitic. But then he asked about an increase in Anti-Semitism since the election.

“Number one: I am the least anti-Semitic person that you’ve ever seen in your entire life,” Trump said, ordering Turx to sit down. “Number two, racism. The least racist person.” Read more about the Trump-Turx press conference exchange here: 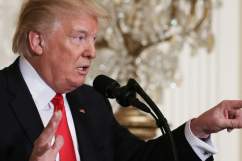 Many White House correspondents present for @POTUS' press conference are immigrants, but we're not taking off for #DayWithoutImmigrants. pic.twitter.com/k924abjaZE

According to his LinkedIn Profile, Turx has been Ami Magazine’s chief political correspondent since February 2011.

Turx’ profile describes his duties as: “Arranged and conducted interviews with dozens of US senators, governors, congressmen and presidential candidates. Met with and interviewed every candidate for president in the 2012 primary season and so far more than half of the candidates of the 2016 cycle. Currently writing a highly-acclaimed humor/satire column which was originally entitled Turx’s Take and has since been renamed to In the News.”

He also writes for Ami’s tween magazine, including “the weekly News Navigator column under the nom de plume Chaim Boruch Tauber and features under Shaul Mozesson. The latest column written under Turx is entitled Mascot’s Museum of Marvels and it fuses news, history, trivia and humor.”

3. Turx Writes for a Hebrew-Language Magazine & Worked at a Summer Camp

The day before the encounter, Turx shared a photo on Twitter of Trump waving to him at the White House.

On LinkedIn, Turx says he also writes “numerous well-researched and investigative stories on a myriad of topics. Many of the stories have been syndicated in Zman’s Hebrew-language magazine, as well as the national magazines Der Shtern and Shpaktive.”

He’s previously worked at a summer camp and as a teacher. For five years, he was program director for Camp Chevra, which entailed “running the programs at Camp Chevra, a summer school for grades Pri though 8th, in addition to publishing the weekly camp newsletter and directing the camp’s video productions.”

He’s held various counseling and teaching positions, writing of one, “I have no clue why I still teach. Perhaps because I enjoy having my ego deflated on a regular basis.”

4. Turx Studied ‘Informally’ With a Professor

As a kid I imagined working at 6 Flags is the best job ever.
Though, working in the White House alongside POTUS has gotta be a close second! pic.twitter.com/bCNY7tamfv

On February 15, Turx wrote of Trump, “As a kid I imagined working at 6 Flags is the best job ever. Though, working in the White House alongside POTUS has gotta be a close second!”

Turx says on LinkedIn that he has affiliation with Columbia University’s Graduate School of Journalism, where he “took one-on-one lessons with two-decade New York Times columnist Professor Ari Goldman.”

The alumni relations director at the Columbia Journalism School told Heavy, “I wanted to let you know that Jake Turx is not a graduate of our school.”

The director said that Goldman did confirm that he and Turx studied together “informally.”

5. Turx Said on Social Media That Trump ‘Misunderstood’ His Question

It's official!!! I'm honored to welcome @mdds20 as my 25,000 follower!
Y'all are the 25k smartest, wittiest & most handsome followers ever! pic.twitter.com/TC2rvgcWSA

On Twitter, Turx said the president didn’t understand his question, and he wanted to seek a clarification.

He also directed a tweet toward Press Secretary Sean Spicer:

Dear @PressSec @seanspicer,
Please call on me at the next press briefing. I'm the guy w/ the words "Jake Turx" on my kippa.
(RT this y'all!)

Loading more stories
wpDiscuz
28
0
Would love your thoughts, please comment.x
()
x
| Reply
Jake Turx is a Jewish reporter whom Donald Trump called a liar at a press conference because he asked about anti-Semitism rising after the election.