Getty Saad Hariri is the Prime Minister of Lebanon.

Lebanon Prime Minister Saad Hariri held a joint press conference with President Donald Trump on July 25. It was part of a five-day visit to the U.S. for the 47-year-old Hariri.

Hariri is the leader of the Future Movement, which was previously led by his late father, Rafik Hariri. He is currently in his second tenure as prime minister, having previously served from 2009 to 2011. He became prime minister again in November 2016.

Hariri is married to Lara Bashir Al Azem and they have three children, sons Houssam and Abdulaziz and daughter Lulwa. You can follow Hariri on Twitter.

Here’s what you need to know about Hariri.

Hariri is a member of the Hariri Lebanese political dynasty. His father, Rafik Hariri also served as prime minister twice and was assassinated in February 2005. Hariri’s father accumulated wealth as the owner of Saudi Oger Ltd., which is still wholly owned by the Hariri family and headquartered in Saudi Arabia.

When Rafik Hariri was killed, Hariri not only inherited his father’s political role, but also his business. Hariri is still chairman of Saudi Oger and his younger brother, Ayman Hariri, is deputy CEO. Before he became a politician, Hariri also led the Oger subsidiary Oger Telecom.

Forbes estimates that Hariri’s current net worth is $1.4 billion.

“We, the government, will get to work to resolve the economic, environmental, security and political issues the Lebanese face,” Hariri said in November. “Our duty toward the Lebanese is to work quickly to protect our nation from the burning fires around it, to protect it in the face of terrorism, and to provide mechanisms to face the burdens of the Syrian displaced people. And to restore hope and trust in our youth of a better future.”

The president of Lebanon is Michel Aoun, who was elected in October.

2. Hariri Attended Georgetown University, Which Has a Building Named After His Father

Hariri moved to the U.S. for college, attending Georgetown University. He graduated in 1992 with a degree from the McDonough School of Business. In 2009, Georgetown announced that Hariri made a $20 million donation to the university’s business school to name a new building after his father.

The building was dedicated in September 2009, with younger brother Fahd Hariri in attendance.

Hariri’s other activities in the U.S. include the Hariri Foundation-USA, which is based in Bethesda, Maryland. It was founded by his father and provides scholarships and opportunities for young Lebanese students in the U.S. One program covers full tuition for two years of graduate study at Boston University. 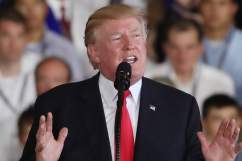 3. Syra’s Government Issued an Arrest Warrant for Hariri & He Responded by Calling Assad a ‘Monster’

GettyHariri in Beirut in November 2016.

In December 2012 Syria’s government issued an arrest warrant, Reuters reported. Syrian President Bashar al-Assad accused Hariri and his ally Oqab Saqr of “terrorist crimes” by supporting rebels in the Syrian Civil War. The warrant was issued over a year after Hariri’s first tenure as prime minister ended when pro-Assad parties walked out of the cabinet.

The Syrian government claimed Hariri and Saqr discussed providing weapons to rebel Louay Meqdad. Saqr claimed that the recording that aired on Lebanese television was edited.

Hariri responded to the warrant by calling Assad a “monster” in an interview with the Daily Star.

Hariri has been a longtime critic of the Assad regime. In 2014, when he was still living in exile in France and Saudi Arabia, he blamed Assad for the 2005 car bomb assassination of his father. However, it’s the suspects in the assassination were tied to Hezbollah, a militant group that has seats in the Lebanon parliament and cabinet. Hezbollah also supports Assad.

“Everyone knows who gave the order. It was Bashar Assad,” Hariri told Europe 1 Radio in 2014. “One day we will go and get them (those responsible). They will pay.”

4. Hariri Will Try to Convince Trump Not to Cut $80 Million in Support for Lebanon’s Military

Hariri’s goal with his trip to the White House is to convince Trump to keep an a U.S. State Department program that aids the Lebanon military alive. The Washington Post reports that the program is worth about $80 million for 2017.

Hariri’s government has been an ally of the U.S., but it is in a fragile state as Hezbollah continues to assist Assad’s forces. On July 20, Reuters reported that Hezbollah and the Syrian army worked together in an offensive to force Islamist insurgents from the Syrian-Lebanon border. Meanwhile, the Lebanese army took a position around Arsal, a town in East Lebanon. Hezbollah said this week that it is driving out Jabhat Fateh al-Sham fighters near the town.

Hariri also said this month that his government will only coordinate Syrian refugees’ returns to Syria with the United Nationals after Hezbollah struck a deal with the Syrian government on its own.

“We will only address this issue in close coordination and joint planning with the U.N. and its specialized agencies,” Hariri said, reports Reuters. “We are in support of a speedy and safe return of the Syrian displaced, however, we will, under no circumstances, force the Syrian displaced to return to Syria.”

While Hariri’s party is supported by Sunni Muslims, Hezbollah is a Shia Islam group. 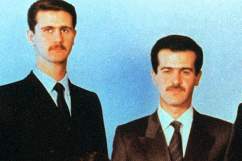 5. Hariri Lived in Exile Outside of Lebanon for 3 Years Before Returning in 2014

Hariri lived in exile from 2011 to 2014 after his first government collapsed. The government fell apart in January 2011 after the opposition parties, led by Hezbollah, left the cabinet while Hariri was visiting President Barack Obama in the U.S.

During his exile, Hariri spent his time in France and Saudi Arabia. His return in August 2014 came as a surprise. According to France24, before he returned, he announced that the Saudi Royal Family was financially backing the Lebanese military’s fight against extremists on the country’s border with Syria.

Before he returned, he told the Guardian that he feared for his life.

“I would love to go back,” he told the Guardian in January 2014. “But I think there are huge challenges that face Lebanon and one of the challenges is staying alive. Lebanon is better served by me staying alive.”