Evelyn Rodriguez and Freddy Cuevas are the parents of Kayla Cuevas, a Long Island teenager who was brutally murdered by the vicious MS-13 gang. Her death was one of a string of Long Island murders attributed to the violent gang, which is made up of many immigrant members.

Horrifically, Evelyn was run over and killed on September 14, 2018 as she prepared a memorial for her daughter. According to Fox News, Rodriguez and another person had argued about the placement of the memorial, when an SUV accelerated toward her.

My thoughts and prayers are with
Evelyn Rodriguez this evening, along with her family and friends. #RIPEvelyn https://t.co/wMwxRdjBHM

Both Rodriguez and Cuevas were invited by Trump to attend his 2018 State of the Union address, sitting with First Lady Melania Trump. Trump also invited Elizabeth Alvarado and Robert Mickens, the parents of 16-year-old Kayla Cuevas’ best friend, Nisa Mickens, 15. Nisa and Kayla were “close friends since elementary school” but both were murdered in 2016, according to a statement released by the White House.

“Their deaths were among a string of 17 Long Island slayings that have been attributed to Mara Salvatrucha, also known as MS-13,” the White House says. Some of the gang members accused of the girls’ murders were not in the country legally, so Trump likely invited the parents to continue his emphasis on illegal immigrants who commit crimes. The president has railed against the brutality of MS-13 in the past.

The way that Kayla and Nisa died is graphic and horrific. The string of Long Island murders had already horrified New York, but the slayings of two young teenage girls in such a brutal manner drew particular attention.

Bodies have been found in vacant lots and the woods throughout Long Island, attributed to the MS-13 murder spree. The murders of Kayla Cuevas and Nisa Mickens in September 2016 galvanized law enforcement. According to the New York Times, the girls were American-born and killed in a “suburban cul-de-sac,” helping them become a “flashpoint” in Trump’s war on illegal immigrants who commit crimes.

Mickens’ “brutally beaten body” was found on a street on September 13, the day before she turned 16, and the “beaten body” of her 16-year-old friend, Cuevas, was found the next day, reports CBS. According to CBS, Cuevas was “marked for death” after feuding with MS-13 gang members on social media. Some photos on Kayla’s Facebook page show her drinking, smoking, and flashing hand signs. She wrote that she was single and worked at “don’t care.” Mickens had posted trophies on her Facebook wall.

Selvin Chavez and Enrique Portillo, 19, are accused of murdering Cuevas and Mickens after placing a call to accused gang member Jairo Saenz and his brother, Alexi, according to a Justice Department press release. The gang members – along with other juvenile gang members – bludgeoned Mickens to death with baseball bats and machetes and chased Cuevas down in the woods, the release says.

“In the months leading up to the murders, Cuevas was involved in a series of disputes with members and associates of the MS-13. Approximately one week before the murders, these disputes escalated when Cuevas and several friends were involved in an altercation with MS-13 members at Brentwood High School,” the Justice Department news release alleges.

“After that incident, the MS-13 members vowed to seek revenge against Cuevas. On the evening of September 13, 2016, Chavez, A. Saenz, J. Saenz, Portillo, and other members of the Sailors Locos Salvatruchas Westside (Sailors) clique of the MS-13 agreed to hunt for rival gang members to kill. They separated into different vehicles and drove around Brentwood looking for targets.” 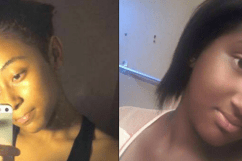 2. A Dozen Members of the Gang Were Arrested in the Homicide Spree

In March 2017, a dozen members of the MS-13 gang were arrested in some of the homicides, including the two girls and the murder of another youth, reports CBS News. Four were accused of killing the girls. According to the New York Times, three of those four were undocumented immigrants.

The 17 killings in Suffolk County, New York that were attributed to MS-13 occurred over a 17 month period of time, according to The New York Times.

The Justice Department release continues: “Chavez, Portillo, and two other juvenile MS-13 members, who were riding together in one car, saw Cuevas and Mickens walking down Stahley Street. They recognized Cuevas and called A. Saenz and J. Saenz, the leaders of the Sailors clique, who authorized them to kill the two girls. Chavez, the driver, pulled up close to the girls, then Portillo and the other MS-13 members jumped out of the car and attacked them with baseball bats and a machete, striking the girls numerous times in the head and body.”

3. Kayla Cuevas Wanted to Work in Law Enforcement When She Grew Up & Her Mother Says She Attended the SOTU to Get Proper Resources

Evelyn Rodriguez told the New York Times that she doesn’t want to help any side politically. She just wants resources devoted to prevent what happened to her daughter from happening to someone else. “I want him to ensure that we’re going to get the proper funding for the resources for our kid,” Rodriguez told The New York Times about Trump. She spoke from her home in Long Island. “I’m not here for anybody’s political gain. I just want what’s right to be done. Everybody should put their political agenda aside and think about what’s going on in our country.”

The Times reports that she is a registered Democrat who grew up in Puerto Rico and the Bronx.

Both girls had big dreams. “These murders show a level of brutality that is close to unmatched,” Suffolk County police commissioner Tim Sini told CBS.

Newsday reports that the girls were from supportive families and added that “Mickens aspired to be a veterinarian or nurse; Cuevas wanted to work in law enforcement.”

The two girls shared a love of basketball and dreams of joining the WNBA. Mickens’ mother told Newsday the girls played on a traveling basketball team together. Newsday reported that Cuevas was outgoing while Mickens was more shy, but they both wanted to rise above drug and gang violence that they saw in their neighborhood.

4. Many Other Long Island Young People Have Died at the Hand of MS-13 & Evelyn Rodriguez Sued Her Daughter’s School

According to Newsday, Evelyn Rodriguez sued her daughter’s school after the homicides. She “has filed a $110 million federal suit against the Brentwood schools saying the district failed to protect her daughter against MS-13 gang members and ignored warnings about repeated threats to the girl,” Newsday reported.

The two girls were among a string of murder victims attributed to the vicious gang. On April 12, 2017, “the bodies of four men ranging in age from 16 to 20 were found in a community park near a children’s playground and soccer field in Central Islip,” reported Fox News.

Jorge Tigre, 18, one of the recent victims, tried to stop hanging out with the gang after the girls’ murders, leading the gang members to target him, according to The New York Daily News.

Other victims were identified as Justin Llivicura, 16, of East Patchogue, Michael Banegas, 18, of Brentwood and his cousin Jefferson Villalobos, 18, who was visiting from Florida, Daily News reports, adding that the victims were found lying face down with multiple wounds. A video circulated showing the bodies lying in a park, the Daily News reports.

Another victim of the gang was 18-year-old Jose Pena-Hernandez, found murdered in the woods. The MS-13 killed him for “violating their rules — but only after consulting with ‘gang leadership’ in El Salvador,” reports The New York Post.

Jefferson Villalobos, one of the MS-13 murder victims. (Facebook)

The gang is also accused of slaying Jose Lainez-Murcia, who was “ambushed and shot outside his home ‘because he was deemed to be ‘chavala,’ or enemy of the MS-13’ after bragging that he had assassinated gang members in El Salvador,” according to The New York Post.

5. It’s Not the First Time That Trump Has Vowed to Crack Down on the Gang & 10 of Those Accused in One Roundup Were in the Country Illegally

Donald Trump’s invitation to the parents indicates he will continue to highlight the murderous gang. He’s vowed to crack down on it before.

President Trump has directed some of his harshest rhetoric against MS-13. He told Time Magazine: “They come from Central America. They’re tougher than any people you’ve ever met. They’re killing and raping everybody out there. They’re illegal. And they are finished.”

Attorney General Jeff Sessions has also vowed to get rid of the gang. MS-13 is also called Mara Salvatrucha. According to Fox News, the gang is “believed to have been founded as a neighborhood street gang in Los Angeles in the mid-1980s by immigrants fleeing a civil war in El Salvador.”

It’s now considered one of the most violent street gangs in the world, and it’s also responsible for violence back home.

“The brutal murders of Nisa Mickens and Kayla Cuevas, and the savage killing of Jose Pena, allegedly committed by these defendants, exemplify the depravity of a gang whose primary mission is murder,” United States Attorney Robert Capers said in a press release announcing the earlier indictment. “As the MS-13 continues its efforts to expand and entrench itself in our communities, both by sending gang members to illegally enter the United States from Central America, and by recruiting new members from our schools and neighborhoods, this Office and the FBI’s Long Island Gang Task Force will continue our mission to dismantle the MS-13 and free our neighborhoods from the terror they cause.”

ABC News reports that in “a recent roundup of 13 suspected MS-13 gang members accused of murder and other charges, seven had entered as unaccompanied minors.” Ironically, some of the youths, from Honduras and El Salvador, are fleeing violence from MS-13 back home, where the gang took root after some of its members were deported back home from the U.S.

Of the suspects indicted in the Mickens and Cuevas’ homicides? “10 are in the country illegally, two have green cards, and one is a U.S. citizen,” CBS News reported. One of those gang members was previously deported, according to The New York Post.