Among those killed in the shooting Wednesday at Stoneman Douglas High School was Aaron Feis, a beloved football coach at the school. He always put himself second and was trying to help other people, and the day of the shooting was no different. In the midst of all the terror, witnesses say that Feis was a hero, putting his own life on the line to make sure that his students were safe. But this wasn’t the only time he’s been admired. His friends and students alike agree that he was always a hero for how he dedicated his life to the people he teaches.

Witnesses are saying that Feis, 37, jumped in front of gunman’s bullets, putting his own life on the line for his students. Colton Haab, a 17-year-old junior and football player, told CNN that he heard the coach was shielding three girls from the gunfire. “(He) made sure everyone else’s needs were met before his own. He was a hard worker. He worked after school, on the weekends, mowing lawns, just helping as many people as possible,” Haab said.

Willis May, Douglas football coach, told the Sun-Sentinel that a student told him directly that Feis had jumped between her and the line of fire, pushing her out a door so she would be safe. Denise Lehtio, spokeswoman for the school’s football program, said: “He died the same way he lived — he put himself second. He was a very kind soul, a very nice man. He died a hero.”

Andrew Hoffman, a former student who also recently coached swimming and water polo teams, told the Miami Herald that Feis worked security and took his role of protecting students very seriously. “He’s very well dedicated to the safety of the school during the daytime.” Feis was working in his capacity as a school security guard when the original call came in. Someone asked over the school’s security radio if the sounds were firecrackers and he said: “No, that is not firecrackers.”

A spokesman told CNN Thursday morning that Feis had died. Reports indicated he had been in surgery after being transported to a local hospital Wednesday.

Feis Dedicated His Life to His Students

Feis was a Douglas alumni who graduated in 1999 and has spent his entire career at Marjory Stoneman Douglas, according to his bio. He dedicated his life to his students. One of his former students shared this Instagram post below and wrote: “This, ladies and gentlemen, if the face of a hero. Coach Aaron Feis was injured protecting a student in the shooting at Marjory Stoneman Douglas High School and, at last report, is in critical condition. He is a friend to all students that know him. He was always so nice to me when I went to school there, and I know he is close with my brother and his friends. Please, take a moment to send healing prayers for him.”

When he played football, Feis played center for the Eagles from 1995 to 1998. He wanted to pay forward all the great coaching he received, so he returned to Douglas in 2002 and spent eight years as the head coach of junior varsity. His coaching delivered the only loss to St. Thomas, breaking the school’s four-year winning streak. Feis was also the college recruiting coordinator.  On his LinkedIn page, Coach Feis was listed as a football coach for Broward County schools, and a security guard and bus driver.

Rather than sharing details of the shooter, I choose to HONOR the bravery of HEROS like a Football Coach & security guard Aaron Feis. He stepped in front of students as shots were being fired. He took multiple bullets and later died. Aaron Fies, YOU ARE A HERO. pic.twitter.com/WciD5aQqw1

Nick Miller wrote about Feis on Facebook: “Praying Aaron Feis pulls through. A man’s-man and great guy. Heartbreaking and I’m praying for your family and the other victims. Pull through Coach.”

Coach Feis, reportedly in critical condition after today’s shooting, covered and saved a number of Douglas students this afternoon.

Our thoughts & prayers go out to the Parkland community.

He Was Married and Had a Daughter

Feis was a hero to many, even outside of the shooting. Kaden Culpepper wrote on Facebook: “Damn coach we were just talking not too long ago !! About life and having daughters. I prayed and prayed its not real man. This is so upsetting. I honestly wouldn’t have made it out of Douglas if it wasn’t for you. I owe you more than you’ll ever know. Coach Aaron Feis. Thank you for everything you did for all of us. Eagle pride will never go away.  Love ya coach. We all hope you’re ok and get through this !!!!”

Do you know what it takes to face a mad man with an assault rifle while being unarmed ? Coach Feis is an American hero.

Feis was married to Melissa Feis. They have a daughter, Arielle, according to his school bio. The coach was described as a quiet man with a good sense of humor, always ready to laugh.

Broward County Sheriff Scott Israel said in a press conference that Feis was one of the great people he had ever known.

“I know Aaron personally. I coached with him. My two boys played for him. I don’t know when Aaron’s funeral is. I don’t know how many adults are going to go, but you’ll get 2,000 kids there. The kids in this community loved him. They adored him.”

Students Said He Was Like a Dad at School: ‘Everyone Respected Him, and He Respected Everyone’

Ashley Speziale, 22, said that he was known for always wearing sunglasses and rarely taking them off, even when he was indoors. His office was always open to his students, she told The Daily Beast. “Even if I wanted so much as a place to sit, his office was always open. He’d sit with me. He’d talk to me. He’d let me be in silence.” She said he was friendly with everyone, but also always knew when he needed to be an authority figure first and foremost. Speziazle, whose father was head of security for a time and worked with Feis, said they had a great bond and everyone trusted them. Tonya Sanchez, 22, is another former student. She told The Daily Beast: “He was like your dad at school. Everyone respected him and he respected everyone.” 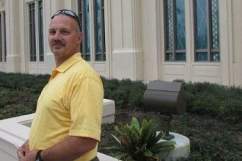 Chris Hixon: Athletic Director Shot at Florida School Would ‘Give You the Shirt Off His Back’

Loading more stories
wpDiscuz
0
0
Would love your thoughts, please comment.x
()
x
| Reply
Coach Aaron Feis, who was killed in the Florida school shooting, was a hero during the terrifying ordeal. His students say he was a hero all the time.