Olympic gold medalist Mikaela Shiffrin is a fan favorite and a sight to watch on the slopes. However, how wealthy has skiing made Shiffrin? What is her net worth?

Shiffrin is good-looking, charismatic, young, and extremely talented as an athlete, all attributes that make her popular with sponsors. That’s led to endorsement deals that could be worth many millions by the time she’s done skiing. PyeongChang is likely to help her marketability due to the amount of TV time she is getting. She is already worth millions of dollars at the young age of 22.

1. Shiffrin Has Many Endorsement Deals & Is Worth at Least $3 Million

Slovenia ->Austria->Italy->Switzerland —Spent last month in Europe hopping between competitions. Had my #Visa with me wherever I went! #Ad #PyeongChang2018 #Journey ToPyeongChang

Shiffrin’s 2018 net worth is estimated to be about $5 million, and she’s said to earn about $3 million per year. Celebrity Net Worth puts her current net worth at slightly lower: $3 million. Everyone agrees though that she is likely far from realizing her full earning potential as she is still so young.

Shiffrin is very popular with marketers. “Shiffrin’s nonendemic sponsors are Red Bull, Barilla pasta, Longines watches and Oakley sunglasses. She has ski equipment deals with Atomic, Leki and Reusch. All are long-term agreements,” reported SportsBusinessDaily in 2017.

According to Forbes, “Shiffrin could have another decade in the spotlight and earn $30-50 million over her career, barring injury.”

“She’s by far the most interesting personality that’s begun winning that young,” said Tiger Shaw, U.S. Ski and Snowboard Association CEO, told SportsBusinessDaily in 2017. Her first gold medal came in Sochi in the slalom when she was only 18.

2. Shiffrin’s Earnings Potential Could Reach That of Lindsey Vonn & She Received $25,000 for Her Gold Medal

Peek-a-boo ?? Great race today! Thank you to everyone who worked so hard to combat the weather from last night! Also thanks to the fans for coming to watch and cheer for us! PC: @pentaphoto #sheskis #CantStop #givesyouwings #eleganceisanattitude #teamvisa

According to Forbes Magazine, Shiffrin pocketed “a $25,000 bonus from the U.S. Olympic Committee” for her gold medal in the last Olympics. The site reported that Lindsey Vonn “has parlayed her success and fame into an income of roughly $3 million a year through deals with the likes of Under Armour UA, Red Bull Head and Oakley” and added that “Shiffrin has the potential to at least match Vonn off the hill when it comes to endorsement earnings.”

As a point of comparison, snowboarder and fellow Olympian Shaun White’s net worth is generally put at between $20 million and $40 million. According to Celebrity Net Worth, “Thanks to her talent and all-around good looks, she is one of the most marketable young stars of the 2018 Olympics in Pyeongchang, South Korea.” Vonn’s net worth is estimated at far lower despite her celebrity status: $6 million.

According to Good Housekeeping, “Her celebrity in the skiing world has also earned her millions of dollars in prize money and endorsements.” 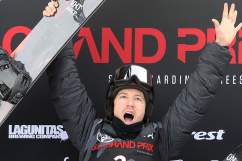 3. Shiffrin Was in Demand From Marketers Even Before PyeongChang

Shiffrin has not had trouble landing endorsement deals, and that was the case even before PyeongChang. “Shiffrin is young, attractive, charismatic and represents the complete package for marketers. She already has a half-dozen endorsement deals, including Oakley and Procter & Gamble PG, but her price tag just went up,” reported Forbes in 2014.

According to Deadspin, Shiffrin isn’t spending her fortune partying. She’s focused like a laser beam on her athletic performance. “That means an extraordinary number of hours on the slopes and insane physical training,” the site reported, adding that she “will famously choose a pre-10 p.m. bedtime over a party.”

S P E E D ⚡️ D A Z E We were ready to rumble but apparently some foggy-cloud-snake(?) really needed to migrate through the Super-G course today??‍♀️. Oh well, what can ya do? Next chance tomorrow! (For further explanation on the “foggy-cloud snake”- google the “Maloja Snake weather pattern” ?) #IfYouWantASnowstormScheduleASpeedRace #SirNapsALot

Although Shiffrin wasn’t raised in poverty, her parents are not from great wealth. A lengthy profile in the New Yorker says that Shiffrin’s parents both worked in medicine.

Her mother, Eileen, has a nursing degree, and “while working in the I.C.U. at the St. Elizabeth Hospital, outside Boston, she met Jeff Shiffrin, a resident anesthesiologist,” the profile said. “Jeff had grown up in northern New Jersey, where his father ran a couple of liquor stores.”

Both of Shiffrin’s parents were involved in skiing. 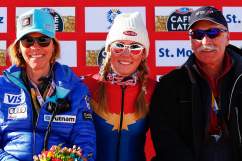 Hey. ? @outsidemagazine @carlos_serrao (PS I’m not jumping nearly as high as it looks in this pic ?)

If Mikaela reaches her goal of winning multiple gold medals in PyeongChang, her wealth is likely to skyrocket. Consumers are still becoming acquainted with her.

According to SportsBusinessDaily, “Shiffrin is still relatively anonymous in the U.S. and can be presented as a fresh face. According to the Davie-Brown Index, she ranks 2,491st out of 4,000 celebrities in overall consumer awareness.” That’s far less than Vonn.

Read More
5 Fast Facts, Breaking News, Winter Olympics 2018
Learn more about the net worth of Olympian Mikaela Shiffrin, who is popular with marketers.