Brett Kavanaugh received President Donald Trump’s Supreme Court nomination, but now that nomination has become hugely controversial. Three woman have come forward with allegations against Kavanaugh, and Christine Blasey Ford is testifying about her allegations today. Through it all, his family has stood by his side, even while his mother Martha was pulled into some of the rumors about Christine Ford. Now supporters have put together a GoFundMe to support his family. Here is what you need to know about Kavanaugh’s family, including his parents, his wife, and his children.

1. His Parents Are Everett Edward Kavanaugh Jr. & Martha Gamble Kavanaugh, & His Dad Was an Attorney Who Kept Calendars, Inspiring His Desire To Do the Same as a Teen

GettyBrett Kavanaugh speaks as his father and mother listen at the Senate Judiciary Committee.

Brett Kavanaugh was born on February 12, 1965 in Washington, D.C., but he was raised in Bethesda, Maryland. His parents are Everett Edward Kavanaugh, Jr. and Martha Gamble (Murphy). Both of his parents attended his confirmation hearing for Circuit Judge in 2004. They also attended his swearing-in ceremony in 2006.

Public records indicate that his dad, Everett Kavanaugh Jr., is a retired attorney. His mother is also an attorney and a judge.

During Kavanaugh’s testimony about Christine Ford’s allegations, Kavanaugh got choked up when he talked about his dad. He said that he kept a calendar as a teen because his dad started keeping detailed calendars of his life in 1978.

Brett Kavanaugh gets emotional and breaks down in tears as he mentions his father: "Why did I keep calendars? My dad started keeping detailed calendars of his life in 1978."

"In 9th grade, in 1980, I started keeping calendars of my own"pic.twitter.com/RSitswbmfc

2. Brett Kavanaugh’s Mother Was a Maryland Judge Who Had Ruled Favorably Toward Christine Blasey Ford’s Parents in a 1996 Foreclosure Case

Judge Kavanaugh emotional, voice breaking, as he discusses his mother and father, and then his 10 yr old daughter saying they should pray for Ford. An powerful moment.

When Christine Blasey Ford’s accusations surfaced, rumors began circulating that her allegations were some kind of payback for a role that Kavanaugh’s mother had played in her parents’ foreclosure. But as Snopes pointed out, this is inaccurate. Yes, Martha Kavanaugh did preside over some parts of Ralph and Paula Blasey’s foreclosure case in 1996. But she actually ruled in their favor, and they were able to keep their home. She granted a motion in 1997 to end foreclosure proceedings against the Blaseys, after they were able to refinance their mortgage. The Blaseys kept their home, and transferred ownership of the home into a family trust in 2014.

Martha got her bachelor’s from Trinity College and her law degree from Washington College of Law, The American University, in 1978.

Ashley Estes Kavanaugh worked for George W. Bush for a long time, even before she and Brett were married. They worked in the White House at the same time, from 2001 to 2005 while she was Bush’s personal secretary. But her time with Bush goes back even longer than that. From 1996 to 1999, while Bush was Governor of Texas, she was his personal assistant. She was also the personal assistant for the Bush-Cheney Presidential Campaign from 1996 to 2000. The Bushes even attended the Kavanaughs’ wedding in 2004.

Since the allegations by Ford came out, Ashley has received death threats, USA Today reported. She received threatening emails at work, where she’s the town manager. They included messages like “My condolences to you for being married to a rapist. Although you probably deserve it,” and “F*** YOU AND YOUR RAPIST HUSBAND.”

The Wall Street Journal reported that she received emails that read “May you, your husband and your kids burn in hell” and telling her to “put a bullet” in her husband.

She and her husband appeared together on a Fox News interview and she sat behind him while he testified about Ford’s accusations.

Ashley and Brett have been married since 2004. They have two daughters, Margaret and Liza. Their first daughter was born just 13 months after they were married.

Both daughters were seen at Brett’s confirmation hearings, and photographed by news media. Ashley was sitting with them.

During his testimony about Ford’s allegations, Kavanaugh said that his 10-year-old daughter suggested they pray for Ford.

During his testimony, Brett Kavanaugh says his 10-year-old daughter told his wife, “’We should pray for the woman (Ford).’ That’s a lot of wisdom from a 10-year-old.” | WATCH LIVE: https://t.co/QDD1HYetPA #KavanaughHearings pic.twitter.com/HgFSzZ7iio

Since Kavanaugh’s testimony about Ford, a GoFundMe has raised more than $500,000 for Ford’s family. The page was started by John Hawkins on September 24. The description for the page reads: “Like many decent people from both parties, I have been disgusted by the unsubstantiated 36 year old smears aimed at Brett Kavanaugh. We live in a country where innocent until proven guilty is supposed to mean something; yet Brett Kavanaugh’s reputation is being dragged through the mud while his family is facing non-stop death threats.  This is a horrible way to treat a good man who has dedicated his life to public service. So many unethical people are giving unprovable 36 year old accusations the same weight as 6 FBI background checks, hundreds of hours of hearings and testimony under oath. It is disgraceful.

It’s unclear if the money will actually be able to be used by the Kavanaugh family, however. A staff member said that it will be awhile before they know, and Hawkins told her “the money would be here when they’re ready to decide how to handle it, which I assume will be after the vote.” 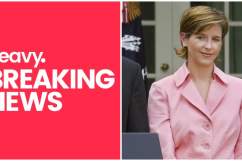 Loading more stories
wpDiscuz
0
0
Would love your thoughts, please comment.x
()
x
| Reply
Brett Kavanaugh's dad is a lawyer, and his mom was a judge who ruled favorably in the Blaseys' foreclosure. A GoFundMe for his wife and kids went viral.