Getty Former US ambassador to Russia, Michael McFaul, was the first non-career diplomat to assume the position.

Former U.S. Ambassador Michael McFaul served as the United States Ambassador to Russia from 2012 to 2014. Prior to being nominated to his ambassadorial position, he worked on Obama’s National Security Council as both a Special Assistant to the President and a senior director of Russian and Eurasian Affairs.

McFaul has since returned to Stanford University where he is a professor of political science, but his name has recently resurfaced in the White House, when at the joint press conference in Helsinki Putin offered to “help American investigators pursue their theories about Russian culpability” in exchange for being able to question United States officials like McFaul who have been suspecting of interfering in Russian Affairs.

Allowing Putin to question former ambassadors like McFaul would be an unprecedented move by the White House, one that former Secretary of State John Kerry described as “not something that should require a half second of consultation” in a tweet.

The administration needs to make it unequivocally clear that in a million years this wouldn't be under consideration, period. Full stop. Not something that should require a half second of consultation. Dangerous. https://t.co/5smobXDnkc

McFaul is married to Dianna Nortion, has two children, and has given a Ted Talk on why he thinks Trump and Putin get along so well. Here’s what you need to know.

1. Putin Has Requested That He Have Access to McFaul, and Trump Has Considered it

On July 19, White House Press Secretary Sarah Huckabee Sanders declined to rule out the option of Trump handing over officials such as McFaul to Putin for questioning in his own Russian investigations. Instead, she said that “Trump is going to meet with his team” to consider the option.

This consideration was met with widespread criticism, with even a spokesman from the State Department calling it “absolutely absurd” that the president would consider handing over an official to another government.

The Russian government reportedly has a list of 11 officials it would like to speak to, including McFaul. Of Trump’s consideration of the proposal, McFaul tweeted, “As I discuss in detail in From Cold War to Hot Peace, Putin has been harassing me for a long time. That he now wants to arrest me, however, takes it to a new level. I expect my government to defend me and my colleagues, in public and private.”

2. McFaul Was A Witness to the “Rise of a Harsher Form of Putinism” While in Russia

From 2012-2014, McFaul lived in Russia as the United States Ambassador and was a witness to the rise of a “harsher form of Putinism,” according to The New Yorker.

While McFaul was in Russia, he was accused by a conservative Russian television host, Mikhail Leontiev, of being a “pure democracy promoter”.

“Has Mr. McFaul arrived in Russia to work in his specialty?” Leontiev said. “That is, to finish the revolution?”

To The New Yorker, McFaul said, “The shit that Leontiev put out on me—this haunted me for the rest of my time in Russia. I was made out to be the guy who came to Moscow to foment revolution…Meanwhile, I was feeling really bad about this fiasco, and in D.C. the mid-level people were saying, ‘Why is McFaul doing this?’ It was affirmation of why you don’t send people like McFaul to Moscow. Like I was the one screwing up the U.S.-Russia relationship.”

3. He’s Written Several Books on Russia, Including His Most Recent: ‘From Cold War to Hot Peace: An American Ambassador in Putin’s Russia’

Michael McFaul: From Cold War to Hot Peace: An American Ambassador in Putin's RussiaAs President Barack Obama's adviser on Russian affairs, Michael McFaul helped craft the United States' policy known as "reset" that fostered new and unprecedented collaboration between the two countries. Then, as U.S. ambassador to Russia from 2012 to 2014, he had a front-row seat when this fleeting moment crumbled with Vladimir Putin's return to the presidency. What are the major threats emanating from Vladimir Putin's Russia? Are diplomatic relations dead? Michael McFaul is professor of political science, director, and senior fellow at the Freeman Spogli Institute for International Studies at Stanford University, and a senior fellow at the Hoover Institution. He served for five years in the Obama administration, first at the National Security Council, then as U.S. ambassador to the Russian Federation. For more information on this event, please go to: https://www.carnegiecouncil.org/calendar/data/2018-05-09-from-cold-war-to-hot-peace-an-american-ambassador-in-putin-s-russia2018-05-09T13:57:59.000Z

McFaul has written 8 texts on Russia, specifically, including his most recent book detailing his experience as the Ambassador to Russia.

In his introduction for ‘From Cold War to Hot Peace’, McFaul wrote, “I have spent the greater part of my life trying to deepend relations between Russia and the United States. But in 2014 all this efforts seemed for naught. Heightening my sense of frustration, I was banned by Putin from traveling to Russia— the first U.S. ambassador since George Kennan, in 1952, to be barred entry to the country.”

McFaul continued, “What had I personally done wrong? Had I pursed the wrong strategies? Or had I embraced the wrong goals in the first place?”

4. He Was the First Non-Career Diplomat to Be Ambassador to Russia

Appointed by Obama after a career as an academic, McFaul was the first non-career diplomat to be the Ambassador to Russia.

After five years of government service for the Obama administration, McFaul retired from government work and returned to a professorship at Stanford University. He is also an analyst for NBC and an occasional columnist for The Washington Post.

5. In 2014, He Claimed Russian Spies Were Bugging His and His Wife’s Cell Phones

Why do Trump and Putin get along so well? | Michael McFaul | TEDxStanfordDuring his tenure as U.S. Ambassador to Russia under President Obama, Stanford Political Science Professor Michael McFaul lived with death threats against him and his family. Since returning to the U.S., McFaul has been banned from returning to Russia, but at home he is one of the most sought-after observers of what he calls the Trump-Putin “Bromance.” His take on Russia today is both insightful and troubling. But as he says, “Diplomacy is not a popularity contest.” Michael McFaul is Professor of Political Science, Director and Senior Fellow at the Freeman Spogli Institute for International Studies, and the Peter and Helen Bing Senior Fellow at the Hoover Institution. Dr. McFaul served for five years in the Obama administration, first as Special Assistant to the President and Senior Director for Russian and Eurasian Affairs at the National Security Council at the White House (2009-2012), and then as U.S. Ambassador to the Russian Federation (2012-2014). He has authored several books, including Advancing Democracy Abroad: Why We Should, How We Can and, with Kathryn Stoner, Transition. This talk was given at a TEDx event using the TED conference format but independently organized by a local community. Learn more at https://www.ted.com/tedx2017-06-02T19:24:24.000Z

While serving as Ambassador to Russia, McFaul told of being constantly followed, harassed, and verbally demonized on Russian television. But according to The New York Times, McFaul continued to be monitored by Russians even after returning home and concluding his government service.

During a talk at the University of Chicago, McFaul shared that his wife’s boss had called her cell phone only to have a Russian answer the phone. “Were they sloppy?” he said during the talk. “Or was that a shot across the bow to say, ‘We know you’re in Palo Alto and we’re still around’?”

In an interview on NBC’s ‘Meet the Press’, McFaul said, “There is no doubt that I am a primary subject of interest, and from time to time, they have also leaked conversations that I thought were private. That’s just the state of working in Russia.” 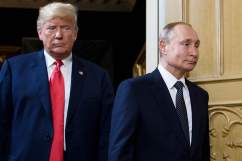 Read More
5 Fast Facts, Politics
Former US Ambassador to Russia Michael McFaul was the first non-career diplomat to assume the position during the Obama era.