A Coast Guard lieutenant who federal prosecutors have accused of being a “domestic terrorist” who wanted to carry out a “massive” attack had compiled a hit list of targets that included several top Democratic politicians and well-known members of the mainstream media. Christopher Hasson was arrested on February 15 on federal gun and drug charges. But prosecutors say that is just the “tip of the iceberg.”

Hasson, a 49-year-old resident of Silver Spring, Maryland, who has been based at the Coast Guard’s headquarters in Washington D.C. since 2016, was plotting to “murder innocent civilians on a scale rarely seen in this country,” prosecutors said February 19 in a court filing asking a judge to keep Hasson behind bars. Hasson has not been charged with any terrorism-related offenses. He was arrested on a criminal complaint accusing him of possession of firearms and ammunition by an unlawful user or addict of controlled substances, and possession of tramadol, and remains in federal custody pending a February 20 detention hearing.

In court documents, prosecutors say Hasson identified himself as a white nationalist who has advocated for “focused violence” to create a “white homeland.” He was researching the manifesto of far-right Norwegian mass murder Anders Breivik and prosecutors believe he was stockpiling weapons and supplies as Breivik instructed in his writings. The Norwegian terrorist killed 77 people in a 2011 attack.

The case was first uncovered by Seamus Hughes, a former Senate counterterrorism advisor who now works with the George Washington University Program on Extremism, which provides “analysis and policy solutions on radicalization, terrorism and extremism.” You can learn more about the GWUPoE and Hughes’ work here. Hughes, the program’s deputy director, has revealed details on several cases involving American extremism and terrorism, often finding the information in federal court documents before the media. Federal authoroties did not release a press release or statement on the case prior to Hughes’ tweets on February 20 about the arrest.

Prosecutors did not say if there Hasson had a date for or specific plan of attack. Authorities have also not said how they uncovered Hasson’s alleged plans.

Here’s what you need to know about his list of targets:

Hasson Targeted Members of the Democratic Leadership, Presidential Candidates & Prominent Media Members – Many of Whom Are Frequent Critics & Targets of Trump – Feds Say

US Attorney’s OfficeA list of names compiled by Christopher Hasson, according to prosecutors.

Lt. Christopher Paul Hasson, who has served in the Coast Guard since 2012 and previously served in the Marine Corps and Army National Guard, created a list of targets that included several members of the Democrats’ Congressional leadership, along with senators and presidential candidates, federal authorities said in court documents. Members of the media were also among his targets, according to prosecutors.

Among members of the media, Hasson listed “Joey,” who federal prosecutors say is Joe Scarborough, the host of MSNBC’s “Morning Joe.” Hasson was angry about statements Scarborough made calling President Donald Trump the “worst president ever,” and looked up where the MSNBC show is filmed after reading about those comments, according to court documents.

Two other MSNBC hosts, Chris Hayes and Ari Melber, were also on the list, along with CNN’s Don Lemon, Chris Cuomo and Van Jones. All have at times been critical of Trump. Political activist Angela Davis is also on the list, according to prosecutors, as is the chairman of Hillary Clinton’s 2016 presidential campaign, John Podesta, who has been the frequent target of conspiracy theorists, including those who believe in the debunked Pizzagate and Qanon theories.

One target was listed as “Sen blumen jew,” and prosecutors said that was a reference to Connecticut Senator Richard Blumenthal. All of the politicians on the list are Democrats, and many have been vocal opponents of Trump and targets of the president’s vitriol on social media.

Outspoken freshmen Democratic representatives Alexandria Ocasio-Cortez and Ilhan Omar are also on the list, according to prosecutors, along with Reps. Maxine Waters and Sheila Jackson and former Texas Rep. Beto O’Rourke, who ran for the Senate against Ted Cruz and is considering a presidential run.

The Democratic Socialists for America organization is also listed.

It is not clear if federal authorities contacted those on the list. Chris Hayes appeared to indicate he was not contacted by investigators, tweeting, “Is it me or is it kinda weird neither then USAO or DOJ put out a press release on this case?”

In recent weeks, Hasson had also been searching for terms related to those on his list, according to prosecutors. He searched for “what if Trump illegally impeached,” “best place in DC to see congress people,” “where in dc to [sic] congress live,” “civil war if trump impeached,” and “social democrats usa.” Hasson had also searched for “most liberal senators,” “do senators have [secret service] protection,” according to court documents. 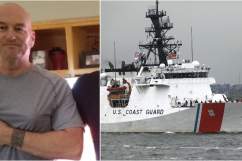 Hasson Was Inspired in Building His List by Anders Breivik’s Manifesto, Prosecutors Say

FacebookChristopher Hasson with his wife and son.

Federal prosecutors said in court documents that Christopher Hasson was inspired in building his list by the writings of Norwegian terrorist Anders Breivik, who wrote in his manifesto about the traitors he was targeting. According to prosecutors, the list is “consistent with the directions in the Breivik manifesto,” which divided targets into categories A, B or C:

This classification system is used to identify various individual cultural Marxist/multiculturalist traitors. The intention of the system is to easier identify priority targets and will also serve as the foundation for the future ‘Nuremberg trials’ once the European cultural conservatives reassert political and military control of any given country. Any category A, B or C traitor is an individual who has deliberately used his or her influence in a way which makes him or her indirectly or directly guilty of the charges specified in this document: 1-8. Many of these individuals will attempt to claim ‘ignorance’ of the crimes they are accused of

According to Breivik’s system, category A was the “most influential and high profile traitors,” including political leaders, media leaders and cultural leaders.

Hasson had searched for “most liberal senators,” “do senators have [secret service] protection,” and searched for Scarborough after seeing a headline in which the MSNBC host claimed Trump to be “the worst ever” president. He also looked up where the host’s show, “Morning Joe,” is filmed, along with his home, prosecutors said.

In emails included in court documents, Hasson wrote about being a white nationalist and believing “liberalist/globalist ideology” was destroying white culture. He wrote that he felt a need to do something to change that.

“No way to counteract without violence. It should push for more crack down bringing more people to our side. Much blood will have to be spilled to get whitey off the couch. For some no amount of blood will be enough. They will die as will the traitors who actively work toward our demise. Looking to Russia with hopeful eyes or any land that despises the west’s liberalism. Excluding, of course, the Muslim scum. Who rightfully despite the west’s liberal degeneracy.”

Prosecutors said Hasson had also “conducted online searches” for “pro-Russian, neo-fascist and neo-Nazi literature,” and made “thousands of visits,” to sites with that information.

Hasson made many anti-Semitic remarks in emails obtained by the FBI, including writing, “I don’t know if there truly is a ‘conspiracy’ of ((((People)))) out to destroy me and mine, but there is an attack none the less. For that reason I will strike, I can’t just strike to wound I must find a way to deliver a blow that cannot be shaken off. Maybe many blows that will cause the needed turmoil.”

According to court documents, investigators seized 15 firearms, including long guns and rifles, from Christopher Hasson’s home in Silver Spring, Maryland. They also seized more than 1,000 rounds of ammunition. And prosecutors said he made nearly two dozen purchases of firearms or related equipment over the last two years.

Hasson is scheduled to appear in court on Thursday, February 21, according to the U.S. Attorney’s Office. His hearing is scheduled for 1 p.m. in the U.S. District Court in Maryland before U.S. Magistrate Judge Charles B. Day.

“The government is seeking detention for Mr. Hasson pending trial,” a spokesperson for the U.S. Attorney for the District of Maryland said in an email. “We will not be commenting further on the case at this time.”

It is not clear if Hasson has hired an attorney who could speak on his behalf and his wife and other family members did not immediately return requests for comment from Heavy.

You can read the motion for a detention order below:

You can read the motion for a detention order below: