Mayor Pete Buttigieg is gaining national name recognition as he picks up momentum in the race for the Democratic nomination for president. But the name recognition does not always lead to an accurate pronunciation!

“Pronounce Buttigieg” is one of the top google searches related to Mayor Pete. The South Bend mayor, who is the youngest candidate in the race, provides a guide for how to say his name in the bio section of his Twitter page: Boot-Edge-Edge. His husband, Chasten Glezman Buttigieg, has provided a slightly different guide for pronouncing the phonetically-challenging name: Buddha-Judge.

Say It With Me: Boot-Edge-Edge

Pete Buttigieg explains the pronunciation of his last name with the seasoned practice of someone who has done it his entire life and doesn’t even think about it anymore. (This author also has a last name that others have creatively mispronounced over the years; I understand the ritual).

Buttigieg has stuck to his preferred guide repeatedly in interviews: Boot-Edge-Edge.

But as CNN host Jake Tapper pointed out, Buttigieg’s husband has seemed to disagree on the pronunciation, or at the very least, inadvertently added to the confusion. Chasten Glezman Buttigieg wrote on Twitter in December of 2018 that there are a few ways to think about: Buddha-judge, Boot-a-judge, and Boo-tuh-judge.

During the CNN Town Hall, Buttigieg insisted that Boot-edge-edge and Budda-judge, when spoken fast, both result in correct pronunciation. Tapper joked, “I don’t want to get in the middle of a marital squabble… I feel like you said your way was right. But then you did not throw your husband under the bus which is, I guarantee you that is the right path, I guarantee.”

According to Forebears.io, “Buttigieg” is most common in Malta, the small island in the Mediterranean where Mayor Pete’s father was born and raised. The nation with the second-highest number of people with that last name is Australia, followed by England and the United States.

Television Reporters Have Struggled to Pronounce Buttigieg’s Name; He Says It is Fine to Call Him ‘Mayor Pete’

Pronounce “Buttigieg” without looking it up first and you are more than likely to stumble over it. And even after looking it up, it can be a tongue twister. Just ask some of the television anchors and reporters who struggled to pronounce Buttigieg after Mayor Pete announced he was launching an exploratory committee for president in January of 2019.

The Washington Post put together a (hilarious) Youtube mash-up of the various pronunciations. The video, embedded above, includes clips from both before and after Buttigieg’s announcement. CNN’s Kate Bolduan seemed to say, “Bood-Id-Idge.” Former CBS This Morning anchor Charlie Rose, in the summer of 2017, pronounced it “Bood-eh-gidge.” An MSNBC analyst said “Bewt-ah-judge.” NBC reporter Willie Geist seemed to say, “Boot-ah-Jug.” NBC’s Katy Tur said “Boot-ah-Judge.”

Buttigieg has stated in interviews that in South Bend, his constituents just call him “Mayor Pete” for simplicity’s sake.

Pete Buttigieg shares the “funny name” title with President Barack Obama. The former commander-in-chief joked about his name during a speech at the 2004 Democratic National Convention, a speech that would come to be known as his launching-pad of sorts into the national political spotlight.

In describing his hope for the future, Obama said in part, “the hope of a skinny kid with a funny name who believes that America has a place for him, too.” That statement occurs at the 1:52 mark of the video embedded above.

In a November 2016 piece in the New Yorker, President Obama included Mayor Pete Buttigieg on his list of people he described as “gifted Democratic politicians.” He also included Senator Kamala Harris and Senator Michael Bennet on that list. 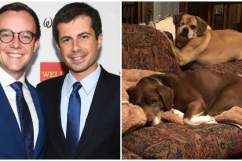