Getty The Patriots and Texans are in a tug-of-war over personnel director Nick Caserio.

The front office spat between the New England Patriots and Houston Texans over the services of personnel executive Nick Caserio was resolved just before the weekend. After reviewing the language in Caserio’s contract, particularly a reported clause that says he can’t interview with other NFL clubs, the Texans realized that they couldn’t interview Caserio for their general manager opening.

As a result, Houston stopped its pursuit of New England’s director of player personnel. Subsequently, the Patriots dropped the tampering charges filed against the Texans for allegedly contacting Caserio before formally interviewing him.

My understanding is the call between Cal McNair and Robert Kraft was very cordial. Language at issue in Nick Caserio’s contract had been there awhile. Once #Texans were aware, they asked what a trade would cost. No deal, so they move on and #Patriots drop tampering charge.

However, Houston’s management team of CEO Cal McNair, vice president of player development Jack Easterby, and head coach Bill O’Brien might not move completely on from Caserio. Shortly after the news was announced, NFL Network’s Tom Pelissero reported that the Texans could revisit their recruitment of Caserio a year from now.

The question of whether or not Caserio actually wants to be Houston’s GM still lingers. But considering that this became a point of contention between the Texans and Patriots in the first place, it’s reasonable to assume that Caserio was interested in the job. 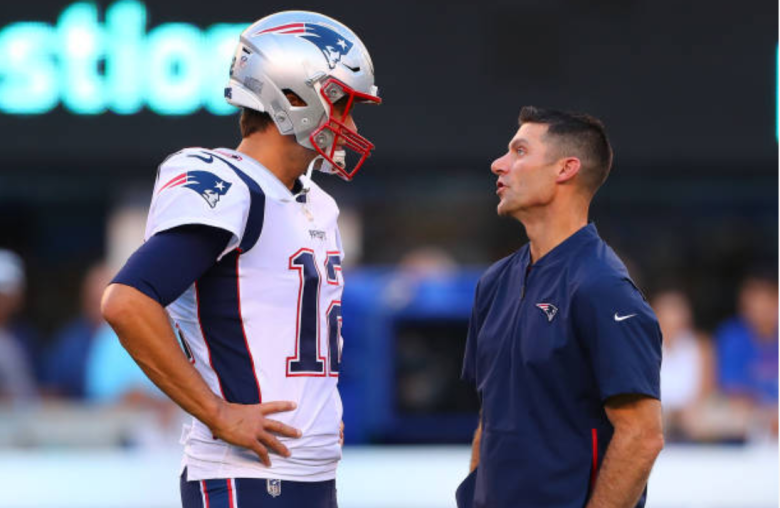 GettyNick Caserio was the Patriots’ QB coach in 2007.

So would Caserio’s job be much different than it is in New England? No, he doesn’t hold the general manager title and it’s widely understood that Bill Belichick has the final say on personnel. But Caserio oversees the draft and free agency for the team, establishing himself as an authority over all available NFL and college players that could be available to the Patriots in a given offseason.

Furthermore, Caserio holds a valued role with the team’s coaching staff. Formerly the Patriots’ quarterback coach (in 2007), he sits in on all coaching meetings throughout the year, works directly with players during practices, helps put together game plans, and provides input to offensive coordinator Josh McDaniels on gamedays.

Perhaps O’Brien would have utilized Caserio in a similar fashion. The two worked together during O’Brien’s time on the New England offensive coaching staff. But unless those duties were put in writing, the Patriots’ argument that Caserio would’ve been making a lateral move in going to Houston might have held more weight.

I think the Patriots are/have been pissed about Easterby jumping ship to an AFC rival, and I don't blame them.

This would be like Wendy Rhoades ditching Axe Cap for Taylor Mason Capital. It's more personal than just a football person. Add the shot at RKK on top of that.

Adding to the tensions between the Texans and Patriots, Easterby worked in the New England organization as the team’s development director and character coach until this past April. Going to an AFC rival and attempting to poach some of his former co-workers from Foxborough very likely rubbed Belichick and the rest of the Patriots’ front office staff the wrong way.

At least that’s how some who follow the team see it.

I think the Texans will keep their current management team in place. I also think they could try to trade for Nick Caserio, who has one year left on his contract.

Over the next year, it will become more apparent if the Texans are biding their time in waiting for Caserio. If the front office maintains the status quo with O’Brien holding personnel authority, Easterby in charge of player development, senior vice president Chris Olsen overseeing salary cap matters, and team president Jamey Rootes handling administrative duties, the staff may just keep the wheels turning and a desk open for Caserio.

Or the Patriots could make sure this situation doesn’t occur again next summer and give Caserio the general manager title — and commensurate raise from his current reported $2 million salary — that establishes him as a high-level employee throughout the NFL. If he’s as indispensable a part of the New England football operation as Belichick has made it sound when discussing Caserio’s work, steps need to be taken to ensure that he doesn’t leave.

Yet that’s assuming Caserio doesn’t want to be a general manager of a NFL team and run his own front office (or pair with another familiar colleague like McDaniels, as almost happened in San Francisco). The Patriots and the rest of the NFL will eventually find out if that’s the case, depending on Caserio’s next move.

Loading more stories
wpDiscuz
0
0
Would love your thoughts, please comment.x
()
x
| Reply
The Patriots are holding on to personnel director Nick Caserio for now. But the Texans may pursue the exec for their general manager position again in one year.