Finnegan Lee Elder is one of two American teens accused of killing an undercover Italian police officer in Rome after authorities say a drug deal went bad. The 19-year-old Elder was arrested along with his friend and fellow California resident Gabriel Christian Natale-Hjorth in connection to the stabbing death of Vice Brigadier Mario Cerciello Rega. The officer was killed on Friday, July 26.

According to Italian authorities, Finnegan Elder and Gabriel Natale-Hjorth were on vacation without their families in Rome and had tried to buy cocaine. When they realized the man they bought the supposed drugs from had given them a “different substance,” they stole a bag and cell phone from the man who helped them set up the deal, according to police. Elder and Natale-Hjorth then offered to return the items in exchange for $112 and a gram of cocaine, authorities said.

Investigators say the man they stole the items from reported the American pair to the police and Rega and another undercover officer were sent to meet Elder and Natale-Hjorth. According to police, a brawl broke out and Rega was stabbed to death. His partner was punched during the fight.

Elder and Natale-Hjorth were later taken into custody and are still being held by Italian authorities pending formal charges. According to a statement from police, the pair was questioned and, “in the face of overwhelming evidence, they confessed to the charges.”

Mario Cerciello Rega and his wife.

Rega was an officer with the Carabinieri, Italy’s military police department. The 35-year-old had recently returned to duty after his honeymoon following his wedding 40 days ago. He has been hailed as a hero by Italian officials and citizens, who have flocked to the building where he worked to leave flowers and notes at a memorial.

Here’s what you need to know about Finn Elder:

1. Elder Has Been Called the ‘Main Suspect’ in the Murder & Is Accused of Stabbing the Italian Police Officer 8 Times During the Alleged Attack

GettyA man walks next to flowers laying down on July 28, 2019 in front of the Carabinieri station in Rome where was based police officer Mario Rega Cerciello who died after being stabbed eight times as he and a colleague tried to arrest two men following a complaint for theft.

The Italian police agency said in a statement that Finnegan Elder is the “main suspect” in the fatal attack on officer Mario Cerciello Rega. The Carabinieri said in the statement that Rega was stabbed eight times.

According to police, the teens were trying to buy cocaine in the district of Trastevere in Rome, an area known for its nightlife. When they tried to use the powder they bought, they realized it was just crushed up aspirin, The Daily Beast reports. They returned to the square where they had bought the powder and confronted a man who had set up the deal, according to police. Investigators said the teens then stole his bag and cell phone, but made a deal to give the items back from him in exchange for money and real cocaine.

Police said the man they stole from, who is reported to be an informant, reported the American teens to officers. Two plainclothes officers, Rega and his partner, went to the meeting with the alleged drug dealer. Police said Rega tried to question the teens when he was attacked. Rega’s partner was punched and Rega was stabbed multiple times.

Surveillance video showed Elder and Gabriel Natale-Hjorth in the square where they are accused of trying to buy drugs and leaving their hotel after police say they killed Rega.

The incident happened about 2 a.m., according to police. Rega died a few hours after the attack. Police said the teens were arrested at Hotel Meridien Visconti in central Rome and investigators found a bloody large knife believed to have been used in the attack and bloody clothes in the ceiling tiles of the room they were staying in.

Italian police say Elder and Natale-Hjorth had purchased tickets to return to the United States and were on their way to leave the country when they were arrested.

A photo taken after the American teens were arrested shows Natale-Hjorth with a blindfold covering his eyes. Police are investigating why he was blindfolded and have said that was not legal. 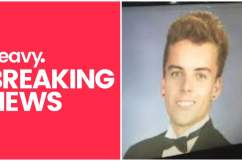 2. Elder Is From the San Francisco Area, Where He Graduated From Tamalpais High School, & He Has Been Attending Santa Barbara City College

Finnegan Elder was born in San Francisco and lives in the area with his family. According to KGO-TV, Elder graduated from Tamalpais High School in Mill Valley, California, in 2018.

Elder previously attended Sacred Heart Cathedral Preparatory, a Catholic high school, in San Francisco, and was on the football team there. He transferred to the public school in Mill Valley after his junior year. Gabriel Christian Natale-Hjorth also attended and graduated from Tamalpais High School, according to KGO.

Elder and Natale-Hjorth are also both students at Santa Barbara City College, according to KGO. It was while studying there that the pair became close friends.

3. On Instagram, Finn Elder Wrote in His Bio, ‘Death Is Guaranteed, Life Is Not’

On Instagram, Finnegan Elder goes by the name “Finntrill.”

Finn Elder goes by the username finntrill on Instagram. His page is private, but he wrote in the bio, “death is guaranteed, life is not.” His Instagram name is displayed as “King of Nothing.” In his profile photo, Elder can be seen holding up his phone and showing off an upside-down cross tattoo.

Gloria Keeley, a neighbor of the 19-year-old Elder, told the San Francisco Chronicle, “I saw nothing that would lead me to believe that this would ever happen,. I saw no violence in him.”

Keeley, who said she knows Elder and his family well, told the newspaper, he is a “normal teenage boy,” and added, “none of us would ever have foreseen this.”

Elder lives in the Sunset District of San Francisco. A note on his family’s home read, “Please respect family’s privacy. Do not disturb,” the Chronicle reports.

Two other neighbors told KPIX-TV that Elder had been seeing getting sick from being drunk on multiple occasions outside of his home.

4. Elder’s Lawyer Says His Client Exercised His Right to Not Answer Questions During a Hearing Held Saturday as the Investigation Continues

Elder’s attorney told local media in Italy that his client has exercised his right to not answer questions during a hearing held on Saturday. Elder has been ordered to remain in jail.

The investigation is still ongoing and formal charges have not been filed.

5. Finn Elder’s Family Issued a Statement Saying They Are ‘Shocked & Dismayed’ by the Accusations, but Have Not Been Able to Communicate With Him

Finn Elder’s parents, Ethan Elder and Leah Elder, and family issued a statement about the arrest of their son.

“We write as a family to express our deepest condolences to the grieving family and community that loved Brigadier Cerciello Rega. We are shocked and dismayed at the events that have been reported, but have very little independent information about these events,” Elder’s family said.

Elder’s family added, “We have not been able to have any communication with our son. We ask that you respect our privacy during this difficult time. Our thoughts are with all of those who have been impacted by this tragedy.”

Loading more stories
wpDiscuz
0
0
Would love your thoughts, please comment.x
()
x
| Reply
Finnegan Lee Elder is an American teen accused of killing an undercover police officer in Italy during a drug deal. Elder is from the San Francisco area.