Andy Beshear is an attorney and politician who serves as attorney general of Kentucky and is the commonwealth’s new governor-elect.

Decision Desk HQ and the Cook Political Report’s Dave Wasserman were among those who projected Beshear, a Democrat, as the winner. NBC News classified Beshear as the “apparent winner,” while the Associated Press tweeted just after 10 p.m. ET on Election Night that the race was “too close to call.”

On Nov. 12, Matt Bevin conceded the race to Beshear. “We’re going to have a change in the governorship based on the vote of the people,” Bevin said at the news conference, according to the Associated Press.

“If we can work together on the areas that we agree on and we can cut down on the rhetoric in the areas that we don’t, there is a significant amount that we can get done,” Bevin said. “I believe that the areas that are so important for Kentucky, for instance the health and the education of our people, aren’t partisan at all.”

Beshear, 41, is married to Britainy Beshear and has two young children, Will and Lila. As Kentucky’s attorney general, Beshear is known for suing Bevin several times, including over budget cuts to the state university system and pension reform.

Here’s what you need to know about Andy Beshear.

Andy Beshear’s father, Steve Beshear, served as the 61st governor of Kentucky from 2007 to 2015. A longtime Democratic politician in the Bluegrass State, he served in the Kentucky House of Representatives from 1975 to 1979, according to his biography on VoteSmart.org. He also served as attorney general from 1979 to 1983 before becoming lieutenant governor. He ran for U.S. Senate in 1996 but lost the race to longtime incumbent Republican Mitch McConnell.

Steve Beshear is a partner with Stites & Harbison based in Lexington, Kentucky, according to the firm’s website. He joined the firm in 1987, then left to serve as governor. He rejoined the firm in 2016. His son Andy also worked for Stites & Harbison before becoming attorney general. In 2016, Steve Beshear was inducted into the University of Kentucky College of Law’s Hall of Fame.

Steve Beshear campaigned for his son, telling local NBC affiliate WPSD 6 that “the one thing that people know about what I did as governor is that regardless of whether they liked or didn’t like the particular thing. They knew that it came from the heart.”

“They knew that we believed that we were trying to do he best for the people of this state. I think they know the same thing about Andy Beshear,” the former governor said. 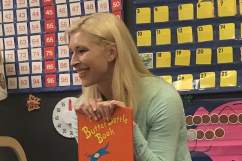 2. Andy Beshear’s Running Mate, Jacqueline Coleman, Is the Granddaughter of a Louisville Basketball Legend Who Played 9 Seasons in the NBA

Andy Beshear and Jacqueline Coleman celebrate their apparent victory at an Election Night party in Louisville.

Jacqueline Coleman has been assistant principal at Nelson County High School in Bardstown, Kentucky, since 2017, according to her LinkedIn profile. She has a long career in education and worked as an instructional specialist for the Kentucky Department of Education for a year. Before that, she taught government and political science at the Jessamine County school system and taught social socials for Burgin Independent Schools.

Coleman was also a basketball coach at both schools. According to the Kentucky sports blog Vaught’s Views:

Her father, Jack Coleman, was a state representative in the 55th District from 1991 to 2004. Her grandfather, Jack Coleman Sr., played basketball at Louisville and then played nine seasons in the NBA (1949-58) with the Rochester Royals where he scored 6,721 points, grabbed 5,186 rebounds and played in three NBA Finals.

“I could never be as talented as my grandfather in basketball. I never got the 6-8 genes. So I thought I would try coaching,” Coleman told the blog. “My dad was an elected official, so I thought I will teach government.”

In 2012, Bleacher Report ranked Coleman 29th on its list of the 50 greatest players in Louisville history, noting that Coleman was the first Louisville player to score more than 1,000 career points.

Kentucky Governor Matt Bevin addresses the crowd after they unveiled the new 2019 Toyota RAV4 Hybrid at the Toyota Motor Manufacturing plant on March 14, 2019 in Georgetown, Kentucky.

Andy Beshear has sued Bevin several times over what he argued was the governor’s abuse of executive powers.

Matt Bevin is already the most unpopular governor in the country. Now, he has the additional distinction of being the only one to be sued by his own hand-picked lieutenant governor. #KYgovhttps://t.co/84cIXY16nt

According to Governing magazine, the bad blood is not just political but personal. After Matt Bevin was elected governor, he removed Beshear’s mother, Jane Beshear, from an unpaid position on the Kentucky Horse Racing Commission and removed her name from a visitor center at the State Capitol.

4. President Donald Trump Campaigned for Matt Bevin, Who He Called a ‘Pain in the Ass’

President Donald Trump held a rally in Lexington, Kentucky, on November 4 to campaign for Bevin.

Get out today and VOTE for @MattBevin and the entire Republican ticket!

Get out today and VOTE for @TateReeves and the entire Republican ticket!

Polls are open for a few more hours, find your location below! https://t.co/0rnhb4z3HU

Trump made mention of Bevin’s reputation as the country’s “most unpopular governor” during the rally. According to Politico, Trump said he and Bevin “work together. Now he is difficult, I have to say. You know, maybe it’ll cost him the election.

“He’s such a pain in the ass. But that’s what you want” in a governor, Trump said.

Andy Beshear speaks at his Election Night party as his wife, Britainy Beshear, looks on next to fellow supporters.

According to his campaign website, Andy Beshear ran on a platform of improving education in Kentucky, creating jobs, reforming the state pension system and fighting the opioid crisis.

“We’ve made a promise to our teachers, police officers, firefighters and other public employees that they’ll be able to retire with dignity, and under my watch, Kentucky will keep that promise. When this governor tried to slash pensions, I went to the Supreme Court and personally argued for the promised pensions of more than 200,000 teachers, police officers, firefighters, EMS, social workers and nearly all city and county employees in Kentucky. Our public servants go to work everyday to keep our communities safe, educate tomorrow’s leaders—our children—or put themselves in harm’s way. The least we can do is protect the promised pension benefits they have paid into during their years of service,” Beshear says on his campaign website.

He said Kentucky loses 30 people a day to the opioid crisis. “Our state has been devastated by this crisis. I’m the most aggressive attorney general in the nation fighting opioid manufacturers and distributors in court. I’ve kept all nine lawsuits in Kentucky, because these companies should have to show up in the communities they’ve ravaged and explain themselves. So far, we’ve directed $9.5 million in settlements to 16 treatment centers and programs across the state. This is a fight I will continue every single day as governor,” he said.

Beshear also supports gay marriage and said he would like to see medical marijuana on the ballot.

Loading more stories
wpDiscuz
0
0
Would love your thoughts, please comment.x
()
x
| Reply
Andy Beshear is an attorney and politician who serves as attorney general of Kentucky and is the commonwealth's governor-elect. Here's what you need to know.