The Iowa Democratic Caucus is a quicker affair this year than previous years. This time, attendees can only vote twice rather than multiple times, which sometimes led precinct caucuses to last late into the night. Instead of having “polls” all day long like during a primary, the Iowa caucus takes place at a specific time and voters must be there for the entirety. Here’s a look at the time it starts and ends and how long it lasts today on Monday, February 3, 2020. You can follow live results here.

Unlike primaries, where you can vote all day during a specific time period, caucuses are different. In Iowa, you have to show up at a specific time and stay for the duration of the caucus. It’s more like a party meeting than your traditional polling vote.

In most locations, the Iowa caucuses will begin at 7 p.m. Central sharp (that’s 8 p.m. Eastern.) However, it’s recommended that voters arrive early, especially if they need to register, Des Moines Register reported. In fact, if you’re planning to vote, try to arrive by 6:15 or 6:30 p.m. at the latest. (Precinct caucus locations must open no later than 6:30 p.m. Central, according to the Iowa Democratic Party.)

You have to be in the registration line or already signed in by 7 p.m. Central in order to participate in the Democratic caucus.

In addition to the Iowa-located caucuses, there will be 99 satellite locations too in 13 states, D.C., and in France, Scotland, and the Republic of Georgia, Des Moines Register reported. The full list is here. Some of these might start earlier than 7 p.m., with some starting as early as 1 p.m. or even 10 a.m. Central (the Republic of Georgia.) Closed satellite locations are only available to people at the site, such as assisted living. Open satellite locations are available to anyone who is a registered Democrat in Iowa. If you’re not already registered and you’re in Iowa, you might want to go to a precinct location rather than a satellite. Some open satellites require pre-registration, while all precinct locations let you register or change your party at the door. 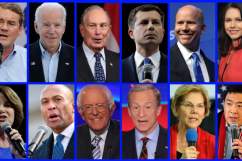 The Iowa Caucuses End After Just Two Votes This Year, But Results Are Delayed Until Tuesday

The Iowa caucuses will actually end earlier than they did in 2016 — some will end significantly earlier. This is because only two alignment votes are being allowed this time around. In previous years, multiple rounds of voting might happen to realign people into viable groups, and this could take a long time. That won’t be happening this year, the Iowa Democratic Party explained.

Although an exact time when the results will be announced isn’t known, Brookings estimated it will be around 11 p.m. Eastern on February 3 or 10 p.m. Central. NPR noted that the caucuses are actually expected to just last an hour, with some ending at 8 p.m. Central (9 p.m. Eastern.)

However, as of 9:17 p.m. Central (10:17 p.m. Eastern), the Iowa Democrat Party reported that results were taking longer than expected.

BREAKING: Taking longer than expected, Iowa Democrat Party says there is no timetable for when caucus results will be released:

“We are doing our quality control checks, making sure the numbers are accurate. People are still caucusing, were working to report results soon.”

This delay is partly due to how many people are showing up to vote. So don’t be surprised if it takes a while for results to come in. Here’s the line of people waiting to register to vote or change their party affiliation at DSM-55. As long as they are in line by 7 p.m., they can vote in the caucus. So it was going to take some time just to get everyone registered.

There’s a long line of people who need to register to vote or change their party affiliation in DSM-55. If people are in line by 7 they’ll be allowed to caucus. A volunteer will stand at the end of this line to mark the cutoff. pic.twitter.com/whLu0W88br

However, there are other reasons for the delay too, some of which aren’t entirely clear.

After lots of calls, here's what we've got – issues on separate fronts:

– Some (many?) precinct chairs could not get logged into app

– Some numbers submitted likely did not match up in caucus math, thus the quality checks

By midnight Central, it was clear results would not be released until sometime on Tuesday.

JUST IN: Iowa Democrats say caucus results will not be revealed until “some point Tuesday”

After the votes are counted, these are reported to the state party. The party verifies the votes and reports it to the media.

Note that the Iowa Democratic Party does not declare a caucus winner, but simply presents results to the public and the SDE number (which is the number of state delegates allotted per candidate, technically called the State Delegate Equivalency number.) An approximate allocation of national convention delegates will also be reported, the IDP noted.

This isn’t the last step before the Democratic National Convention, however. After this, county conventions will take place in Iowa in March, where candidates’ delegates are selected. In April, these delegates will attend district conventions, followed by a state convention in June, Des Moines Register reported. Then national delegates will be chosen to attend the Democratic National Convention in July, where the nominee is officially selected.

READ NEXT: When Are the Democratic Primary & Caucus Elections?

Read More
2020 Presidential Election, Breaking News, Iowa, Politics
What time does the Iowa caucus begin and end today? It doesn't have 'polls' like traditional primaries. Here are the hours and how it works.