A Louisiana jail escapee wanted in a series of violent crimes in Harris County during the months he and another Houston man were on the run in Texas was arrested by the Harris County Sheriff’s Office on February 1, 2022, authorities said. Dekeylon Berry, also known as Daylon Johnson, is facing several felony charges locally and was in custody on armed robbery charges in Louisiana before his escape from custody in September 2021, the sheriff’s office said. Video, which you can watch below, shows the sheriff’s office SWAT team looking for Berry’s co-defendant, Rondrakus Taylor, who remains at large and should be considered armed and dangerous, according to the sheriff’s office.

Berry, 20, of Houston, was taken into custody on warrants charging him with two counts of aggravated robbery and one count of aggravated kidnapping, both felonies. The charges were filed against Berry in Harris County in January 2022. Berry and Taylor were among five men who broke out of the Marksville Detention Center on September 27, 2021, according to the Avoyelles Parish Sheriff’s Office. The other three men were taken back into custody in Louisiana, the Harris County Sheriff’s Office said. Berry and Taylor are both from Houston.

“They were in jail in Louisiana for aggravated robbery and then they escaped prison together in Louisiana as well,” Harris County Sheriff Office Sergeant Thomas said. He said they are dangerous individuals. Thomas said during the incidents in Harris County, victims were shot at and assaulted. He asked anyone with information about Taylor’s whereabouts to call Crime Stoppers 713-222-TIPS (8477).

Berry Is Accused of Robbing a Dollar General Store at Gunpoint & Kidnapping a Woman at a Domino’s Pizza, Forcing Her to Withdraw Money From ATMs

Thomas, a sergeant with the Harris County Sheriff’s Office Violent Crimes and Major Offenders Unit, said they were provided information about Berry, an aggravated robbery and aggravated kidnapping suspect, on February 1. He said they heard he was in the 100 block of Hollow Tree Lane and deputies found him there. He ran from deputies and was taken into custody at his apartment after a foot pursuit, Thomas said. According to Thomas, they also believed Berry was possibly with his co-defendant in the robberies and kidnapping, Taylor, and the county SWAT team surrounded a home in the 2700 block of Skelton Drive.

Thomas said people inside the house said Taylor had been at the home earlier in the day, but he was not there when they searched. Taylor remains at large, Thomas said. He said there is a reward for information leading to his capture being offered by authorities in Louisiana. Crime Stoppers is also offering a reward locally in Houston, Thomas said.

According to Harris County court documents, Berry is accused of using a gun during a robbery at a Houston Dollar General store on November 21, 2021. Further details about that incident were not immediately available. He was charged with aggravated robbery in that case, court records show.

Berry was also charged with aggravated robbery with a deadly weapon and aggravated kidnapping in a November 18, 2021, case, according to court documents. Berry is accused of abducting a woman from the parking lot of a Domino’s Pizza restaurant on Veterans Memorial Drive in Houston on that day, according to court documents. The victim told Harris County sheriff’s deputies she was waiting for her food when she was approached by a man, later identified as Berry, who tapped on her car window using a gun and threatened to shoot her if she didn’t give him money. According to investigators, the woman said she told Berry she didn’t have any money and he ordered her to drive to a nearby ATM, telling her he would kill her if she didn’t comply, court documents show.

Berry is accused of forcing the woman to drive him to two different ATMs, where she withdrew a total of $800 in cash, while he held her at gunpoint from the passenger seat of her car, according to court documents. Berry is also accused of hitting the woman in the head with his gun when he “did not like” the way she was driving, court records show. He then made her drive him back to the Domino’s and he ran away on foot, the sheriff’s office said. 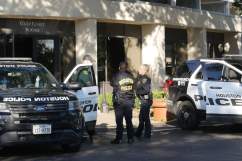 Berry, Who Is Being Held Without Bond, Escaped From a Juvenile Facility in 2019 & Tried to Escape From a Louisiana Jail in 2020, Authorities Said

According to the Avoyelles Journal, Berry and other inmates tried to escape from the Louisiana parish jail in July 2020, more than a year before his successful escape. “Berry was in jail for armed robbery, introduciung contraband into a correctional facility and possession of a Schedule I drug with intent to distribute,” the newspaper wrote. They were spotted before they managed to leave the facility, the sheriff’s office said. Berry was additionally charged with simple escape and criminal damage to property, the newspaper reported.

In September 2019, Berry and three others escaped from the Swanson Center for Youth in Louisiana, according to KTVE. The news station reported that Berry was moved to the Ouachita Correctional Center after he was captured and he was charged with aggravated escape, simple escape and battery on a correctional facility employee. Berry and the others were accused of overpowering a guard, stealing her keys and jumping a fence to escape from the facility. The guard suffered minor injuries, the news station reported.

In the September 2021 escape from the Avoyelles Parish jail, Berry, Taylor and three others, William Johnson, Kyle Cavalier and Davantae Williams, are accused of pulling a bathroom sink off of a wall to escape from the jail building, KALB reports. Berry was being held at the jail on charges of home invasion robbery, simple assault and aggravated battery, the news station reported. Cavalier and Williams were arrested on October 1 in Alexandria, Louisiana. Details of when Johnson was taken back into custody were not immediately available. Berry and Taylor fled to Houston, where they are from, police said.

Loading more stories
wpDiscuz
0
0
Would love your thoughts, please comment.x
()
x
| Reply
The Harris County Sheriff's Office arrested a Houston man, Dakeylon Berry, who broke out of a Louisiana jail and was wanted in local armed robberies and kidnappings.