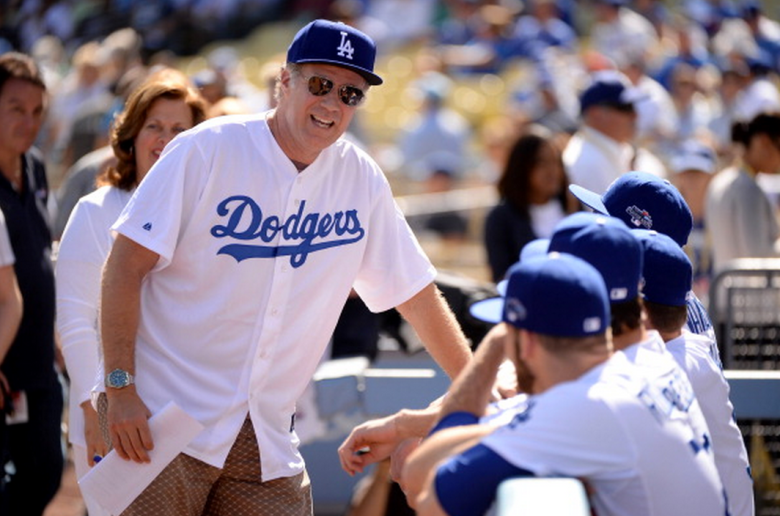 Actor Will Ferrell talks with members of the Los Angeles Dodgers before the Dodgers take on the St. Louis Cardinals in Game Five of the National League Championship Series at Dodger Stadium on October 16, 2013 in Los Angeles, California. (Getty)

Will Ferrell is set to make Cactus League history on Thursday, March 12.

Of the eight games taking place, Ferrell said he will be playing in five of them. And over the course of those five games, the 47-year-old actor and comedian will spend the day playing all nine positions. Should he succeeded, Ferrell would be the first Cactus League veteran to do so.

USA TODAY Sports’ Bob Nightengale was the first to report Ferrell’s plans and said he will travel to each game on a helicopter. He added that some games have even altered the starting time to accommodate Ferrell’s schedule.

Some of the teams Ferrell will be suiting up for include the Arizona Diamondbacks, the Chicago White Sox and the Chicago Cubs.

Being an avid sports fan, Ferrell’s scheme was apparently coordinated by Major League Baseball – MLB – and HBO to help promote cancer awareness, according to The Chicago Tribune.

And believe it or not, this isn’t Ferrell’s playing debut. In 2010, Ferrell attempted to pitch for the Triple-A Round Rock Express in Texas under the name of “Rojo Johnson.” His stunt ended in an ejected after he caused a fake brawl.

So if tomorrow is anything like that outing, it’s anyone’s guess as to what to expect. But one thing is for sure, Ferrell will provide plenty of entertainment during each game.

These games are subject to change.