Caroline Wozniacki, who stripped down for ESPN The Magazine’s Body Issue in June 2017, is engaged to San Antonio Spurs forward, David Lee.

Wozniacki is competing in the Australia Open. On January 15, Wozniacki will start her journey toward a maiden Grand Slam title. First, she will face Romanian Mihaela Buzarnescu.

As for Lee, he won the 2015 NBA Finals with the Golden State Warriors and is a two-time NBA All-Star. The 34-year-old signed with the Spurs before the 2017-2017 season. He’s also played for the New York Knicks, Boston Celtics, and Dallas Mavericks.

In a 2014 interview with In Depth With Graham Bensinger after her public break-up with golfer Rory McIlroy, Wozniacki said she’d like to date a taller guy “so I can wear my heels.” Lee certainly qualifies as tall, since he’s listed at 6 foot 9 inches.

1. Lee Proposed to Wozniacki in November 2017

Safe to say it has been the most incredible couple of weeks in my life! So thankful!

Back in November, Wozniacki announced her engagement by showing off her incredible diamond engagement ring in an Instagram photo seen ’round the world. The couple had been vacationing in Bora Bora when Lee got down on one knee and asked Wozniacki to be his wife.

Lee also uploaded a photo to Instagram announcing his engagement.

“YES! So thrilled to be engaged to my soulmate,” he captioned the picture (it was the same one that Wozniacki posted, seen above).

As far as wedding planning goes, the couple has already started thinking about their big day, but they aren’t sharing any details with the public.

“We are just keeping it to ourselves, but it is such an exciting time and we are both so happy and excited to be at this stage of our loves,” Wozniacki told Fairfax Media ahead of her first match Down Under.

Check out the photo of Wozniacki’s engagement ring below.

Happiest day of my life yesterday saying yes to my soulmate❤️? @dlee042

2. Wozniacki & Lee Began Dating in 2015 & Their Relationship Was Confirmed By Wozniacki’s Brother

Lee and Wozniacki’s relationship started in December 2015, when they first met in Miami. Sources told the New York Post’s Page Six that the two were at a party at Villa Casa Casaurina, previously known as the Versace Mansion, after meeting the night before.

“They were introduced by a friend,” a source told Page Six at the time.

Nine months later, Lee was spotted at Wozniacki’s matches at the U.S. Open.

The relationship was finally confirmed when Wozniacki took to Snapchat to share a picture of herself holding roses on Valentine’s Day.

As if the roses weren’t confirmation enough, Wozniacki’s brother, Patrick, also confirmed the relationship in an interview with Ekstra Bladet in Denmark.

In the interview, Patrick said that he met Lee at the U.S. Open, but Wozniacki didn’t introduce him as her boyfriend. It wasn’t until January 2017 that she sent Patrick a message confirming that the two had been dating.

“So that’s pretty new to me,” Patrick said in February. “I think it’s really good. He is a clever guy, who is also considerate. He is super cool.”

Wozniacki began sharing photos of herself with Lee in late 2016, but their relationship wasn’t exactly made clear. In March 2017, she posted a photo of her and Lee with their backs to the camera — and didn’t tag Lee. She captioned the photo with the “boy and girl” emoji as well as the “heart eyes” emoji, but didn’t seem ready to confirm that Lee was her guy.

That all changed a month later when she took to Instagram to wish her main squeeze a happy birthday.

“Happy birthday handsome!! Thank you for making me smile every single day,” Wozniacki captioned the photo, tagging Lee for the first time on the social media platform.

On June 11, Wozniacki and Lee put to bed any questions about their relationship status with an Instagram post from Sardinia, where the two were vacationing together.

“Having the best time with my love,” Wozniacki wrote. She also tagged Lee in the photo.

4. Wozniacki Was Previously Engaged to Rory McIlroy, Who Broke Up With Her Over the Phone

“The problem is mine. The wedding invitations issued at the weekend made me realise that I wasn’t ready for all that marriage entails. I wish Caroline all the happiness she deserves and thank her for the great times we’ve had,” McIlroy said in a statement. “I will not be saying anything more about our relationship in any setting.”

McIlroy might have stayed quiet, but Wozniacki did not. She later told Graham Bensinger that the two broke up in a 10-minute phone call just after they saw each other in person.

“I was shocked, I thought at least I would get a face-to-face or something but there was nothing. It was just a phone call and then I did not hear from him again,” the tennis star said. “It kind of just ended and I don’t think you expect yourself to be in a situation like that. You can’t prepare yourself.”

Wozniacki said she first thought the call was a joke.

After the call, she went to Miami with her close friend Serena Williams to blow off some steam and recharge. “I felt refreshed and I felt a new self,” she told Bensinger, adding that she’s “moved on.”

After moving on from McIlroy, Wozniacki was seen at a Final Four game in April 2016, but their relationship didn’t last long. The Houston Texans star is now dating Keaelia Ohai.

Lee previously dated Sabine Gadecki, a model and actress. The last time they were seen in a photo together was in August 2014 on Instagram.

Gadecki is an actress featured in episodes of Inside Amy Schumer, House of Lies, Finding Carter and The League. She also appeared in the 2015 Entourage movie.

Gadecki was dating Entourage‘s Kevin Connolly, but Us Weekly reported that they broke up in October 2016. 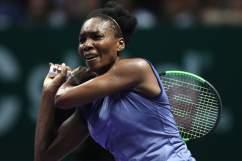