Ditto is officially here in Pokemon Go! Many players are reporting finding Ditto in states all over the U.S. and in countries all over the world. It appears, according to The Silph Road, that any species can turn into Ditto. But another question is at the top of players’ minds. What does Ditto do in battle?

The Silph Road is already gathering information about Ditto as fast as it can. Their early results indicate that Ditto can do pretty much anything in battle. In fact, he’ll adopt the same movesets as whatever species he is battling. His quick move and charge move match that of the species he’s battling, according to Pokemon Go trainers.

Seemingly any Pokemon can now transform into Ditto. In battle, it is adopting the species/moves of the foe – and boosting to similar CP!

When you take Ditto to battle, it will adopt the same species as the first Pokemon it’s battling. Early reports said that it could also boost to a similar CP while in battle. Some trainers are now saying that it will take on the stats and moves of its target, but it will keep its health level and IV, so the CP will be different.

Kvothealar, who was the first person on Reddit to report finding a Ditto, shared a few more details with Heavy about how Ditto acts in gym battles:

If you use it in a gym it transforms into the first opponent it comes across like in the games. It stays as that Pokemon throughout the battles. It gets their type and moveset too. HP doesn’t change but someone mentioned your attack and defense do just like in the game.”

Here’s a picture, courtesy of Reddit’s The Silph Road community, of a Ditto battling an Exeggutor:

Paanvaaannd on Reddit provided some more details about how Ditto works in battle. At the beginning of a battle, Ditto automatically transforms to match the species it’s battling — you can’t dodge or attack first. This happens whether it’s attacking or defending. During this transformation, it may be attacked twice, which means it’ll take some automatic damage.

Ditto will only transform once in battle, reports DimensionalNet on Reddit. It will stay in the form of this Pokemon even if it’s swapped out, the original Pokemon is defeated, and it’s moved back in to fight a new gym defender.

You can watch a video of Ditto fighting in a gym here. Dittos can also fight other Dittos, as you can see in the photo below. But the battles are nothing spectacular. They just chip at each other, DimensionalNet reported.

We’ll add more details about how this all works as more information is available. To see more photos of Ditto, please see this story.

Have you noticed anything else unique about how Ditto performs in battle? Let us know in the comments below.

Read more about Ditto in Pokemon Go in Spanish at AhoraMismo.com: 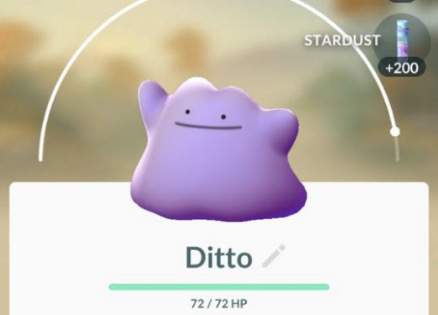