The specifications of the iPhone 8 were leaked ahead of the Apple Special Event. As Forbes reports, an alleged “disgruntled employee” released the final version of iOS 11 (aka Gold Master or GM).

From the report, we can gleam some info on how mobile gaming will be affected by the features of the iPhone 8.

Games may not only look better but play better as well. iOS 11 GM shows that the A11 in the iPhone 8 will retain the six core design from the iPhone 7 and iPhone 7 Plus’s A10 chip. While there are no specifics yet for how fast the processor will run (the iPhone 7’s A10 runs at 2.23GHz according to WCCFTech), it is expected to run at faster speeds.

With games becoming bigger and more complex, battery life will become more and more important. iOS Developer Guilherme Rambo found that iOS 11 GM states that wireless charging will be present. It is based on the Qi standard, but incompatible with existing Qi-based chargers and will also only operate at 7.5 watts meaning it’s not at the faster charging speeds of the latest Qi standards. So while the wireless charging won’t offer faster charge speeds, at least you don’t have to use a chord.

You might even be able to buy games easier. Apple is ditching Touch ID in favor of Face ID, which scans your face when unlocking the phone or using Apple Pay to authenticate payments. This will make it easier to purchase games as you can just look at your phone instead of constantly entering in credit card numbers and passwords. You can see the video tutorial for setting up the Face ID feature from the initial leak below.

The most interesting application to games is the new front facing 3D sensors. KGI Securities Analyst Ming-Chi Kuo reports that the depth sensing module is composed of a structured light receiver, proximity sensor, ambient light sensor, front camera, and structured light transmitter. If it works, it will give the system amazing accuracy with facial recognition.

This can have very interesting applications with games that have augmented reality functionality, or using the iPhone’s cameras to take videos of the world and superimpose game elements in it. Imagine being able to control games with your face! iOS 11 GM will allow you to animate emojis with your facial movements and voice to send recorded messages to people according to Forbes’ report, so a similar technology might be implemented for playing games. Gameplay could involve licking virtual ice cream within a time limit, pointing your eyes to shoot lasers from them, or who knows what else.

While these features are yet to be officially confirmed by Apple, they still have some interesting implications for the future of mobile gaming on iPhone devices. It’s nothing too revolutionary, but it’s improvement none the less. The higher resolution and processing power is expected and while it may not lead to better games it will at least lead to better looking and playing games. The potential for gameplay involving the facial recognition software is the most fascinating part to come from the leaks, and it would be great fun if it’s ever implemented. The only problem is that the device will be prohibitively expensive, with Forbes reporting that the iPhone 8 may start at $999. So even if all of these features lead to improved experiences with games, you’re going to have to spend an arm and a leg to experience it all.

We’re bound to hear more about the iPhone 8’s features or even about mobile gaming on the device during the Apple Special Event on September 12 at 10 a.m. PT / 1 p.m. ET, so be sure to check that out here. 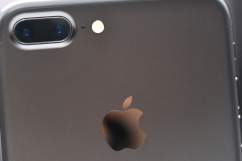