It’s been six years and to this day The Elder Scrolls V: Skyrim is still widely regarded as one of the most immersive Western RPGs ever created. So it makes perfect sense to take that world and combine it with the technology of Virtual Reality to create something even more immersive. And that’s what Bethesda attempted in bringing Skyrim to PSVR.

Skyrim VR takes full advantage of the tech the PSVR has to offer. If using the move controllers, you use your left hand to aim a teleportation rune and then instantly snap to the location while using both hands to pick up objects and fight all matter of monsters and bandits. If you use a standard controller, you have basically the exact same button layout as Skyrim always had but you can also aim your bow and magic by moving your center of vision with the PSVR headset. Both controller options can use either teleportation or the direct movement option where you simply walk around with your peripheral vision darkening. Both controller options take some getting used to, with the Move controllers being especially cumbersome with some of its button placements. However, I found that these controller options actually enhance the experience.

With the teleportation rune, it can be a bit jarring to be constantly jumping forward over and over again while hitting the turning buttons. However, it can actually be quite useful for scaling the infamous mountains in the game as you can just aim where you want to jump. However you can occasionally be stuck in sprinting mode with no clear way to get out and there was one time the rune doesn’t aim far enough down from a ledge making you use direct movement for a second.

As for combat, the motion controls are really useful. Using the move controllers in tandem with teleportation allows you to jump out of the way of attacks while firing back with your own. Melee combat is a bit clunky but it’s still fun to brain a Draugr with a fire mace. I couldn’t figure out how to block with my weapons, however, though shields should work just fine. Combat with the move controllers is best when using magic, as you cover much more distance and do things like teleport in one direction while firing your magic at an opponent in the other or alternate between two different targets. Using the headset is also useful while sneaking around as you can peak around corners and look above display cases while hiding. It’s also great to actually aim down the sights of bows for lining up a shot and aiming over cover. Using the move controllers overall give you much more freedom in movement. However bow combat can be a bit sticky as it can be hard to notch your arrows into the bow.

It’s not nearly as efficient as using a traditional controller and may be more headache than it’s worth, but there’s something to manipulating the environment with your own hands that makes using the move controllers just so magical. I love running around and actually reaching out my arms to catch butterflies. I love getting right up in opponents’ faces or just taking in your environment with a truly first person view as virtual snow blows in your face.

If you want to play Skyrim VR in the most efficient way possible, you should stick with the traditional controllers. While you miss out on actually reaching out to things with your hands in real time, you still get many of the benefits of the motion controls. You can circle around opponents and aim your magic and bows simply by looking at enemies thanks to the headset. And you still get to take in your environment with your peripheral vision and even peek around corners and above cover. I also found the direct movement controls to work just fine in VR and I didn’t get sick even during my two hour play sessions. However, your mileage may vary, especially if you’re prone to motion sickness.

VR is a big component in making you feel like you’re really right there in Tamriel. However it really does help that the game does that already without the magic of VR. Going to places requires you to actually listen to directions from NCPs. Quests can be discovered simply by striking up conversations with NCPs or encountering someone randomly in the world. The masterpiece of a soundtrack captures the mood of the moment perfectly. Abilities can be upgraded just by doing them. VR feels like an enhancement to an already immersive world rather than a tacked-on gimmick, and that’s what’s truly special about Skyrim VR.

Skyrim VR comes with all of the benefits offered in the special edition versions, including enhanced graphics from the first game and all of the DLC. However, there’s one big problem with the game being on PSVR: it’s on the PS4. That means mod support is simply not an option as far as Sony is concerned. It doesn’t even have Creation Club, though distancing oneself from Bethesda’s paid mods is more of a blessing than a detriment. Now Skyrim is fantastic even in its vanilla version, but the fact still stands that the PS4 versions of Skyrim are missing a pretty big feature over other versions. I especially miss the fact that I won’t have expanded recipes and extra carrying capacity. Thankfully the game is only a timed exclusive according to GameRant, meaning that it could come to other headsets in the future.

Graphics are also great as to be expected from Skyrim, though the headset can occasionally make things slightly blurry. Also the draw distance is more noticeable and it can be hard to spot far away and potentially dangerous targets from a distance. However the game’s PR company told Heavy via email that the game on PS4 Pro uses supersampling at a higher resolution for a sharper picture. Also the menus that pop up for bartering with vendors or using crafting tables can dip into the vendor stands or tables themselves if you don’t stand in the correct place when you interact with them.

If you have no patience for VR frustrations inherent to the systems or if you can’t stand Skyrim without mods, then you’d want to steer clear of Skyrim VR. But the absolute magic of its VR controls is palpable. It never gets old and is worth the small bits of hassle the game puts you through. Of course, this is all helped by the fact that Skyrim is already such an excellent game to begin with. This is a must have for anyone wanting a glimpse at the potential of VR. 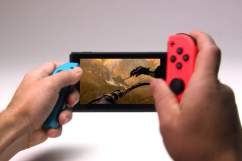