You know the video game industry is in a rut right now when Doom of all games has hacking minigames.

Fortunately that’s not all to the VR version of 2016’s Doom. Despite some unfortunate shortcomings, Doom VFR retains all the fun of the 2016 reboot but with the enhancement of VR tech.

The game does not give the greatest first impression. Instead of playing as the Doom Guy, you play as some guy whom I don’t know the name of.

Doom Guy from Doom (2016) is one of the most expressive and fun protagonists I ever played as, and he never spoke a word. Him pushing away the tablet dispensing exposition, cocking his shotgun to the rhythm of the classic At Doom’s Gate theme, and fist bumping an action figure of himself put me in the exact mindset I needed to be to enjoy the ultra violent mayhem of the game. I felt like I was Doom Guy.

But in Doom VFR you play as a character who can actually speak but isn’t nearly as expressive. His most memorable lines of dialogue are “I have to deactivate the portal” and “I have to get to the computer room.” He can do all the same moves as Doom Guy, maybe even more, but he’s simply not Doom Guy.

As a character who died and had his consciousness uploaded to a combat chassis, you are able to teleport around the area while shooting at demons. The game has it’s own take on the Glory Kills that were so integral to Doom (2016) known as Telefrags; if you stagger an enemy enough, you can teleport into them to instantly kill them while earning extra health. You can also press a button to do a shield burst around you if enemies get too close and dash in different directions to quickly evade projectiles. Grenades can be upgraded from physically throwing them to using a grenade launcher and then a BFG grenade launcher that can clear rooms of enemies.

Don’t even bother with the Move Controllers. You can teleport and shoot just fine but instead of being able to turn around incrementally with taps of the button like you could in Bethesda’s other VR adventure, Skyrim VR, you can only turn around 180 degrees. That means that you have to physically turn around to hit enemies. Because of this, you’re bound to have the Move Controllers either leave the player area or have your body block the controllers from the camera’s view, making your arms in the game unable to move around properly. Also without direct movement, you’ll be standing in place often which can be lethal in a game that demands constant movement. It’s not like you can dodge accurately either because id Software in all of their infinite wisdom decided to assign the left and right dash commands on buttons arranged vertically on the Move Controller. So you can never dash where you want to in the heat of the moment.

Thankfully all of those problems are alleviated once you switch to a standard controller. You have speedy, direct movement with the left stick while being able to turn incrementally with the right stick as well as using teleportation, dashing with the d-pad, and 180 degree turns when you need it. The weapon wheel and grenade tossing are also easier to use.

At it’s core, Doom VFR is no different from Doom (2016). You even fight in the same levels. However, that’s not a bad thing by all means. It’s still immensely satisfying to duck and weave through enemy fire and dispose of demons in vicious ways. It’s still fun to get to know the movement and attack patterns of enemies and select the right weaponry for the job. Everything that was fun about the original game has been mostly retained in Doom VFR.

The additional control options granted through VR actually enhance the gameplay. Instead of aiming your weapon with the control stick, you can aim more fluidly by moving your head around. You can use teleportation with the 180 degree turn button to not only dodge incoming fire but move from the armored front of a Pinky to its exposed backside as it charges.

Oh, and going through the classic levels of Doom in VR is a real treat.

Unfortunately the game retains the original’s problem of forcing you into very rigid ways of combat in order to complete challenges. If you complete the three challenges in a level, which range from Telefraging into 20 enemies to finishing off a Mancubus with a pistol, you’ll gain extra damage resistance. Doom is at its best when your combat is more fluid and not under those restrictions, so they go against the flow of the game and can be a real distraction as you worry about meeting each goal. Fortunately I got through the game with only one damage resistance upgrade so it’s definitely not necessary to complete those challenges and you should just ignore them.

But I can’t ignore the fact that for a good portion of the game you’re stuck in a sort of hub level where you have to complete such exciting tasks as running to a room to flip a switch or putting out fires with a fire extinguisher. The game already allowed you to take a breather from the combat with the exploration of the main levels, and even rewarded you for doing so with hidden collectibles, weapon upgrades, and extra health and ammo. Why it needed this hub level along with pointless hacking and laser puzzles is beyond me.

Doom VFR is a worthy addition to the experience brought by Doom (2016). It retains almost everything that made the original game one of the very best of 2016 with high octane action that is enhanced by its extra movement options and headset aiming. However the fact that you don’t play as Doom Guy, the Move Controllers are useless, and a good portion of the relatively short game is devoted to a sleep-inducing hub level and minigames are too glaring of issues to ignore. So even though it retains a lot of the fun of Doom (2016), it’s more of a supplement than an enhancement. 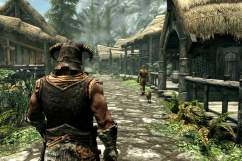